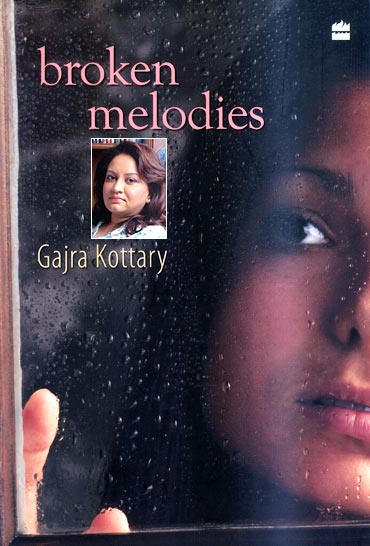 Set in Delhi in the 1970s and 1980s, Broken Melodies is the story of Niyati, a young girl growing up in a dysfunctional household. Faced with the hypocrisies of a philandering father and the seething silences of her mother, the only stability seems to come from her elder sister Nisha.

The presence of her cheeky neighbour Chandan riles her no end until, one day, something changes it all... An enemy becomes a friend and a friend becomes an enemy.

Niyati eyed the clock. It was ten past nine. Didi would be busy with Paaji for the next one hour at least. She hurried back to the room and bolted it from inside. She pulled out one of her new salwar-kameezes that Mummy had got her for Deepawali and rushed to the bathroom. Then she gave herself a look in the mirror. Niyati liked the way she was looking in the pale-blue lacy kurta. She tied her long hair in a loose plait and sprinkled herself with perfume.

Chandan was waiting for her in his living room. Once inside, Niyati clamped the door shut immediately. She looked at Chandan questioningly.

'Everyone has gone to taayaji's house', he explained.

'No,' he answered meaningfully and without further detail.

There was silence, a very loaded one. Neither knew what to say and yet both knew what the other wanted. Chandan gazed at Niyati, at her blue, fitted kurta and her flowing salwar and at her long hair. She was lovely, he thought, a lovely woman now, no longer a girl.

Niyati rushed to him and took his hand. 'Chalo,' she said, pulling him towards the stairs. Before the nonplussed Chandan could ask her anything, Niyati had dragged him up the flight of stairs and into his room. There, leaving his hand, she went to bolt the door, before she faced him again.

'Niyati, I'm getting scared now seeing you bolt the door like this. You're not planning to kill me, are you?' Chandan grinned, his trademark sarcasm back in play.

Niyati stared at him nervously. Chandan noticed a fire in her eyes, a fire he had never seen before. There was also trepidation in her manner, her lips quivered now and then. Bemused, he moved closer to her and caught her hand.

'What is it? Do you want to tell me something?' he asked, turning serious.

Niyati flung herself against Chandan. Face hidden in his chest, she let the tears flow freely.

'Chandan ' she sobbed. 'Make love to me today. Please, Chandan.'

Stunned at her sudden request, Chandan stood transfixed for a moment. Niyati had her arms tightly around him and as she sobbed into his shirt, he heard her muffled request again, 'Please don't think about anything, Chandan. I am telling you to do so. Please love me.'

Chandan gradually let his arms tighten around her.

'What's wrong, Niyati?' he whispered softly in her ear.

Niyati turned her face up and gazed at him, tears blurring her vision. Chandan gazed back lovingly at her. Her soft think lips shone with tears and her eyes, brimming with a strange but intense want. Chandan pulled her closer.

'Niyati,' he whispered. 'You are very beautiful and ' Chandan couldn't say more. A wave of desire engulfed him menacingly. He pressed his lips on Niyati's and she gave in willingly. The feel of Chandan's embrace was what she had yearned for and felt shameful about -- all because of a myth she had believed in all these years. But now that the dam of restraint had broken, she just didn't want the surge to stop.

Niyati pressed even closer to Chandan. But suddenly, Chandan stopped kissing her and pulled back.

But Chandan was now pushing her away from himself. 'No, I can't make love to you, Niyati. Not when you're like this.'

Niyati opened her eyes. Chandan was looking completely away from her now.

'Like how? And why not Chandan! Why not?' Niyati whispered fiercely, her face washed in tears.

'Where were you, Gudiya?' Nisha's voice startled Niyati just as she stepped inside the house.

Niyati didn't answer. She halted briefly, but then continued to walk towards Sumiran's room.

'Gudiya!' Nisha raised her voice. 'I'm asking you something!'

'I heard you,' Niyati answered calmly.

Nisha rushed to Niyati and gripping her by the shoulder, turned her around furiously.

'Achcha! So much change in one week! I trusted you, told you everything, and '

'And what? You expected me to love it all? Is there an obligation to do so?' Niyati spat out her pent-up venom. 'I told you, Didi, please leave me alone.'

Nisha was suddenly cautious. 'Don't shout. Paaji is resting. Come inside the kitchen.'

Niyati followed her reluctantly. Nisha faced Niyati squarely and stared at her sister and her new salwar-kameez.

'I know where you were,' she told Niyati suddenly. Niyati saw the victorious gleam in her eyes.

Ignoring her defiance, Nisha continued, 'You were with Chandan, isn't it?'

Niyati looked Nisha straight in the eye but didn't answer. She turned silently to leave. Barely had she reached the door, when she heard Nisha say, 'Scared now? Now you know how I feel?'

Niyati's head was throbbing with exhaustion. She shut her eyes. Disconnected thoughts began haunting her again and she feared that they would spin out of control. Nisha's suffocating presence filled her with so much disgust that she felt the need to escape immediately. But the urge to hit back was so strong that she knew she had to do it to relieve herself of this torture, so she turned to face Nisha again. Slowly, she walked right up to Nisha.

She collected all her strength and said: 'I am not scared, Didi.' Then suddenly raising her tone in sheer frustration, she added, 'Do you hear me? I am not scared!'

Nisha was unimpressed. 'You will be, when I tell everyone what's happening between you and Chandan', she said icily.

'As if I care! And as if it's really such a big deal, Didi! Chandan and me, me and Chandan! It sounds okay either way, doesn't it? It's at least better than '

'Better than what, Gudiya?' Come one! Tell me,' Nisha said angrily.

'Better than you and Warrier, Didi!' Niyati yelled, provoked sufficiently to explode. 'That man is old enough to be your father! And he is married, too! Can't you figure out whose story will be the more scandalous one?'

'Niyati!' Nisha shook with rage. She moved away towards the door, hurt and wanting to escape the scathing words that her sister was throwing at her.

Paaji was standing at the kitchen door, paralysed and transfixed, his eyes moving searchingly on Nisha.

Niyati saw him, too. She realised that he must have overheard her but she couldn't care less. Ignoring them both, she stomped out of the kitchen.

Nisha's rage melted into panic at the sight of Paaji. She stood rooted to the ground, not knowing what to say, and scared of what would happen now. Her heart beat wildly and her mind went numb.

Paaji moved slowly towards Nisha and before she knew it, gave her a resounding slap that sent her tottering to the floor.

Then even as she cowered in the corner, Paaji simply turned and walked away. Nisha watched him walk towards his room without a word. He then disappeared behind the shut door.

The sad twanging of the tanpura was deafening to Nisha's ears. As she sat on her bed upstairs, she tried to ascertain, from the pace and tone of Paaji's dear instrument, what he msut be thinking. He must be angry, she thought. No, he would understand. After all, he did understand unconventional love. He knew it well. Ambika's image now swept before Nisha's vision. And then Niyati's, too. Damn Niyati! The bitch - how could she!

The tanpura stopped playing. There was no sound, just the thumping of her heart.