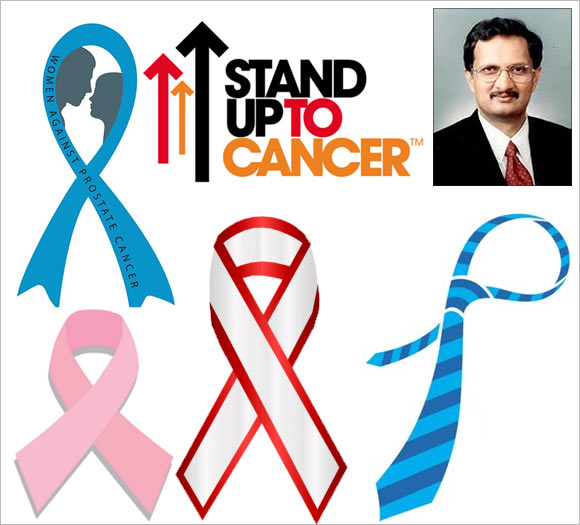 Chairman of the Department of Surgical Oncology at Lilavati Hospital in Mumbai, Dr P Jagannath shares interesting insights on how detecting cancer early on has helped many survive the disease.

On October 5, 2011, a pancreatic neuroendocrine tumour took Steve Jobs' life. Most of us know that.

What many don't know, however, is that the Food and Drug Administration released a vital cancer drug --- that could possibly have saved him -- much later, reveals Dr P Jagannath.

The leading Mumbai oncologist, who's treated numerous cases in his 30-year-old career, explains how the lack of awareness of the illness combined with a delay in action on the part of the patient can prove fatal.

He also leads Crusade Against Cancer, an initiative supported by Amitabh Bachchan, Anjali and Sachin Tendulkar and other celebrities, which aims to provide financial aid to the poor for treatment.

While sharing information about the disease, he remarked that among 100 different types of cancer affecting the human body, tobacco is the only source that is preventable.

In this interview with Rediff.com, Dr Jagannath explains how cancer is curable through courage and optimism, and how a timely and proper diagnosis can aid the process.

'Most instances of cancer in youth are not lifestyle-related' 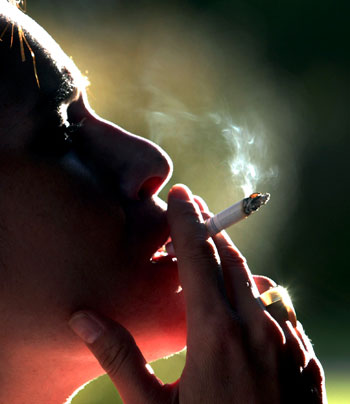 How do you define cancer? Why is an increasing number of young people being diagnosed with the disease these days?

Cancer is just a word. In reality, it's a group of health concerns.

As far as youngsters are concerned, incidences of oral cancer are becoming common. It would be interesting to note that in the metros, while the number of young men smoking has come down to an extent, there has been an equal rise in the number of women who are taking to the habit.

What are the most common types of cancer affecting young Indians due to their lifestyle?

Contrary to popular belief, most instances of cancer in youth are not lifestyle-related.

It's like this -- when you are 40 plus, you are prone to cardiac problems and diabetes. Similarly, we can say that fat individuals share a higher risk of cancer.

There are a few peculiar tumours that are associated with one's lifestyle. For example, consumption of tobacco and smoking leads to oral cancer. Inclusion of pungent chillies in the diet has been reported to cause stomach cancer.

Besides oral cancer, neuroendocrine tumours are an emerging type of cancer often reported among youngsters. With a neuroendocrine tumour, the victim looks healthy on the outside, so it is difficult to identify in the initial stage. It's only in the second or third stage, when you take a CT (computed tomography) scan that you get to know the real picture.

Talking about lifestyle and diet, consuming too much red meat can lead to colon cancer. Also, people who frequently eat junk food are at a relatively higher risk. However, in our country, we traditionally follow a fibre-rich diet, so, we are comparatively better off. Diet does play a role in stimulating cancer, but it's rather a combination of several factors, which include genetic behaviour, environmental conditions and lifestyle to some extent.

Among the emerging cancers, germ cell tumours, which generally occur inside the gonads (ovaries and testis), are a common type of cancer affecting the young generation.

Cancer also varies as per one's location. For instance, in the northern parts of our country, gall bladder diseases are caused due to the contamination of water in that area. 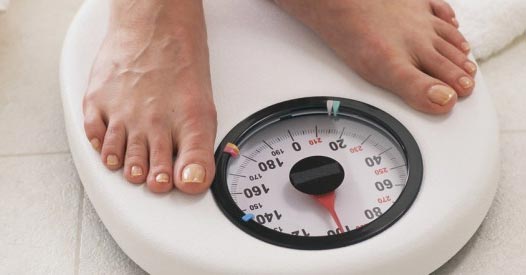 How does one identify that s/he has cancer? What are the initial symptoms?

There are several common signs that people usually ignore, which delays the diagnosis.

These are some of the symptoms you must never ignore for they could be your first warning of cancer:

What are the cancer signs that women ignore?

For women, bleeding in between menstrual cycles could be a warning sign. Besides that, any lumps or nodes in the breast, groin and armpits should not be ignored. Unusual bloating or fatigue is also dangerous.

In most cases, women tend to ignore fluctuations in weight and attribute them to inconsistent dieting schedules. Let me take this opportunity to tell them that no matter how much you diet, any abnormal weight loss or gain should not be taken lightly.

How does one know if s/he is in the danger bracket?

There are two basic types of tumour/ cancer -- malignant and non-malignant. The former is more dangerous.

Similarly, there are primarily four or five stages of cancer development. The first two stages are relatively easier to cure. However, as one advances to the higher stages, the stakes get higher.

If you identify any of the symptoms I mentioned earlier, and if it doesn't heal with regular medication, you must get an ultrasonography done. A regular sonography may not give you the exact picture, but combined with a CT scan, you get a better view of things.

'Exercising will help recover your health and encourage your appetite' 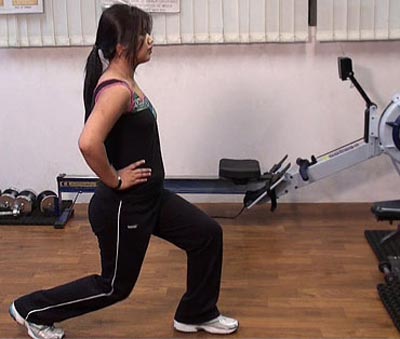 Once cancer has been diagnosed, how should one go about the treatment?

The best part about childhood tumours is that they respond dramatically to chemotherapy.

Even if someone is identified with stage four of the disease, it depends on the the doctor whether the person will receive appropriate treatment.

The doctor should be aware as to what tumours can be treated, what drugs are available in the market and the breakthroughs in technology involved in the treatment so that s/he can decide the best way to approach the situation.

That's why I insist that awareness from both parties -- the doctor and the patient -- is important.

Besides the availability of technology and drugs, it's my personal belief that cancer can be cured if one has the willpower to fight.

How much of a role does diet and fitness play in treating cancer?

Diet does play an important role, especially because you tend to lose so much weight during treatment. When you undergo radiation or chemotherapy, you will suffer from lack of appetite. Adequate exercising will go a long way in recovering your health and encouraging your appetite.

What are the most common myths surrounding cancer?

One of the biggest myths is that cancer is a fatal disease -- it cannot be cured. This belief hampers the very confidence of the person affected. In fact, fear kills you more than the disease itself.

Another common myth is that cancer is infectious. Believe me, had this been true, I would not be sitting here alive and talking to you. 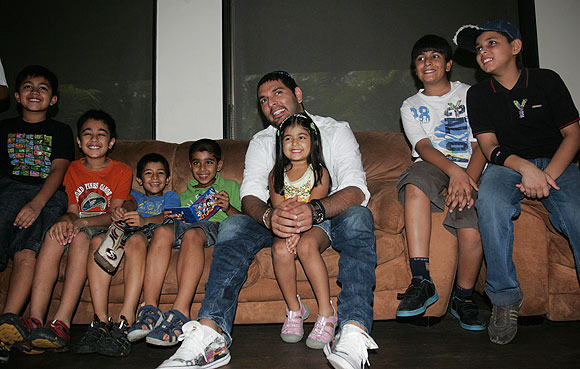 What are the stages of cancer treatment? How much does it cost?

In cancer, the sooner the diagnosis, the better it works for you. The treatment is often a mix of chemotherapy, radiation and medicine. The time of healing depends on how the patient responds to the treatment.

The cost of treatment varies, depending on the stage of diagnosis and the corresponding treatment. At stage two or three, a person spends an average of Rs 4 to 6 lakhs.

Cancer is a disease wherein the cells of a certain part of your body begin to multiply. Both chemotherapy and radiation involve the intake of drugs that destroy cancerous cells in the body.

In younger patients, we try and opt for chemotherapy because their bodies are able to respond to it well. The patient has to either swallow the drugs or they are injected into the body.

In older people, we try and go for radiation. We have to take into account several factors like medical history, genetic history etc before commencing any kind of treatment.

What are the side effects of chemotherapy?

The side effects vary from person to person. Some of the common effects are alopecia or loss of hair, loss of appetite, nausea, vomiting, variation in taste buds and fatigue.

What are the most common mistakes that patients or their families make that can hamper treatment?

Cancer patients are vulnerable to hearing about new methods of treatment available in the market. There are times when relatives nudge patients to try a breakthrough diet or drug. There is nothing wrong with pursuing alternate treatments like ayurveda or homeopathy -- they are free to do so. My only advice would be, let it not affect their primary treatment. Because there are several drugs available in the market today and the FDA is extremely cautious and stringent about its testing methods. Every drug released by them is thoroughly tested before release in the market. So one can be assured of the quality of drugs and technology used in chemotherapy and radiotherapy. This may not necessarily hold true about alternate treatments. But this decision is for the patient to make.

Another mistake is that loved ones, in the process of helping you, end up sharing stories of patients who have succumbed to the disease. In such cases, it is advisable to steer clear of any possible negative criticism that will hamper the primary treatment.

Besides chemotherapy and medication, how can one help a cancer patient survive the disease?

A person suffering from cancer needs a lot of love and support. Cancer is just like any other disease and is totally curable in most cases, if diagnosed early.

Just ensure that you visit a qualified doctor who is aware of the latest drugs and technology. 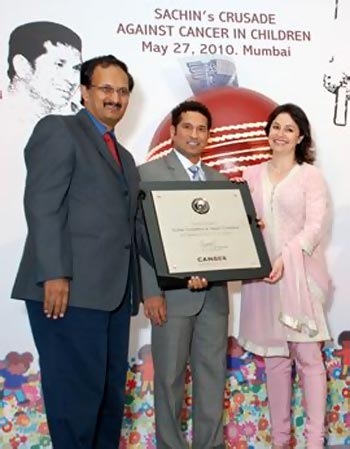 Tell us about the Crusade Against Cancer initiative. How is it helping fight cancer?

When we started India Cancer (www.indiacancer.org), we had a lot of people asking for financial help because treatments were turning out to be expensive for them. Through the Crusade Against Cancer initiative, Sachin and Anjali Tendulkar helped us raise funds for such people.

The cancer foundation receives about Rs 20-25 lakh a year, with which we try and fund the treatment of the poor. But it's not sufficient, given the rise in the number of reported cases, the cost of drugs and the technology involved.

Besides, the average cost per individual comes to about Rs 4 to 5 lakh, which makes it impossible to expect the state to fund or support the cause.

That's why we appeal to people to donate as much as they can, to help us in the battle against the deadly disease. We may not be able to root it out completely, but we can at least try and save some lives.

Any advice for people who will be reading this?

If you know anyone who is fighting against cancer, behave normally with them. Don't treat them like they are aliens from a different planet. Do not sympathise with them.

Cancer is a disease that does not distinguish between young and old, rich and poor. All are equal before cancer and God. It can affect anyone, anytime. Remember to treat the patients like soldiers. Tell them that they are not alone. 'We are all with you in this.' With your support, they better pick up their guns and start fighting.