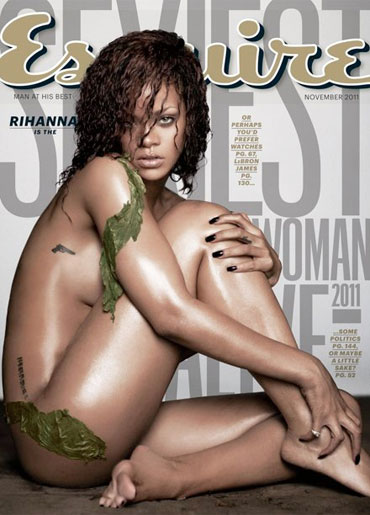 Which French fashion house has come out with a limited edition line of saris? Which actress is all for cosmetic surgery?

R&B queen Rihanna has been named 'Sexiest Woman Alive' for 2011 by Esquire Magazine.

The Barbadian singer was listed at the top, leaving behind 15 other notable beauties, which included singer Beyonce, actresses Mila Kunis and Rosie Huntington-Whiteley.

The 23-year-old singer is celebrated by the men's magazine for her glistening bod and fearless sense of style, which Esquire says transcends even Madonna in her pursuit of "carnal pop".

"At the end of a concert, I don't feel like I've been this sexy thing. Really, I don't even think about it," the Herald Sun quoted the singer as telling in the November issue of the magazine. 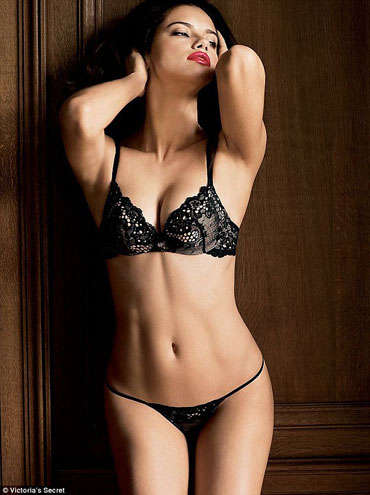 Brazilian bombshell Adriana Lima is the star of a new campaign from Victoria's Secret.

The Daily Mail reported that the 30-year-old supermodel shows off some of the raciest bras and thongs from the lingerie giant's new autumn collection.

Dressed in black lace and little shrugs, Adriana's trim and toned bod is on display in one shot, while in others she dons more girly, fun little pieces.

This is one autumn line that may not keep you very warm, but they're smoking hot all the same!

Salma Hayek gets 'heebie-jeebies' at thought of Botox! Salma Hayek has revealed that she has never undergone Botox treatment as the very thought of it gives her the 'heebie-jeebies'.

The 45-year-old actress says that her flawless, glowing skin is due to the beauty creams she uses.

"I have no Botox. The thought of a needle coming to my forehead, it really gives me the heebie-jeebies. So I'd rather put on my creams," the Daily Mail quoted Hayek as telling Latina Magazine.

"It's fun, it smells good, and it's relaxing," she added.

But Salma, who has a nearly wrinkle-free skin might not rule out using the line-reducing injectables in the future.

The Hollywood A-lister has also revealed that she loves wearing dresses because they always make her look good "quickly".

Co-star Demi Moore had praised Salma's sense of style but the Puss in Boots actress expressed her love for dresses, because she finds it easier to pick out one garment rather than put together a whole outfit.

"I was having dinner with my friend Demi -- yes, that one -- and she said, 'Oh, my God! Every time I see you, you are so put together!' And I told her it's a lot easier to grab a fabulous little dress than to put together a whole casual outfit with jeans, a top, the right jacket, and great shoes. You slip on a dress and you can't go wrong," Contactmusic quoted the Mexican beauty as saying.

And Salma admitted heading to a beauty salon or going shopping when she is in a bad mood.

"Get a pedicure, and if that isn't working, go get a wax job! Sometimes a new lipstick just helps. Beauty products always cheer me up and give me hope. If it makes you feel pretty, why not?" she told Redbook. 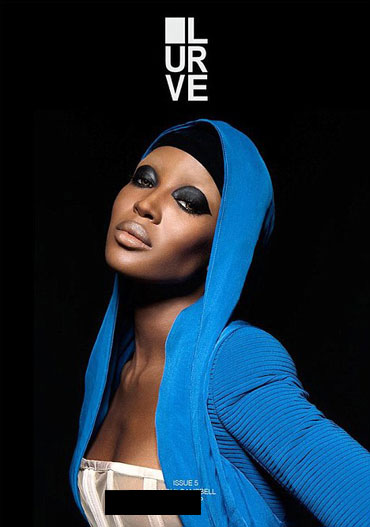 Star model Naomi Campbell appears to have shaved off her eyebrows as she shows off her age-defying looks on the cover of Lurve Magazine's most recent issue.

The beauty, who is known for her fashion sense, looks rather bizarre with her eyebrows apparently missing and with heavy eye makeup.

Though her brows appear to be shaved off, it is most likely that they were either dyed blonde or it is a Photoshop effect, the Daily Mail reported.

Despite the strange styling, the 41-year-old was stunning in a hooded top, black bandana and see-through dress. Nicola Roberts has revealed that her style is "open minded" and she does not like to stick to one designer for her wardrobe.

The singer, who recently released her debut album Cinderella's Eyes, believes that there are a "lot" of "cool labels" she can try on so she would hate to restrict herself to a few outfits.

"I don't like sticking with one person or thing, ever. There's a lot of cool labels out there; I'm open-minded enough to be a fan of many designers and make a few of their looks work for me. Regardless of how commercial or left-field they are, I respect most designers," Contactmusic quoted her as telling Rolling Stone.

"In London, there's Henry Holl#8743 I wear loads of his stuff. What else? I love Topshop, I love Moschino in Milan, and I love Bora Aksu. The way Aksu does panelling is quite unique and threads his collections together; I appreciate when anyone can keep a motif cohesive over time," she added.

Kelly Rowland 'in love' with wigs -- and assets! 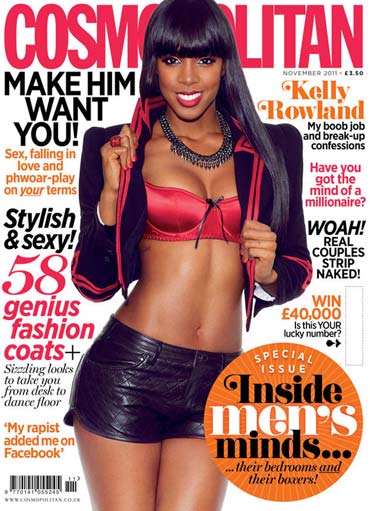 Kelly Rowland has admitted that she is "in love" with wigs and adores experimenting with different hairpieces.

The When Love Takes Over hitmaker gets her hairpieces custom-made and has learned over the years the styles that suit her best.

"I'm in love with wigs. I get them custom-made and I have my hairstylist shape them to my head. I can go from long to short in less than a minute," Contactmusic quoted her as saying.

"I tried a blonde wig once and I looked like I should have been wearing a tacky dress with my legs out. I looked crazy. Even a too-light brown hair colour doesn't work for me because it becomes the same colour as my face," she revealed.

The 30-year-old beauty also admitted she would love to shave her head one day.

She told Essence Magazine: "One day I'd like to cut off all my hair, really close-shaven to my head. It's such a really beautiful look."

Kelly also revealed that she does not regret enhancing her cup size four years ago.

The singer, who says that she loves her boobs, also cleared that she did not do it for men but for herself.

"The decision was 10 years in the making, so I'm comfortable talking about it," Us Magazine quoted her as telling Cosmopolitan UK's November issue.

"It's something I really wanted to do for myself -- not for a man, not for work, for myself. And I love them!" she added.

Michelle Pfeiffer says she is 'all for' cosmetic surgeries Michelle Pfeiffer has revealed that she is in favour of all appearance-enhancing procedures.

According to Elle Magazine, the 53-year-old actress also insists that too much criticism is levied at women who go under the knife to alter their looks, and that surgery should not be seen as negative as long as the results are good.

"I'm all for a little here and there -- fine. It doesn't matter to me if people have plastic surgery or they don't, or if they do Botox," the Daily Express quoted her as saying.

"But when people don't look themselves anymore, that's when you go, 'Oooh,' and it's kind of sad. It's uncomfortable for us, but if they're happy with what they see in the mirror, does it matter?" she added. It seems that Miranda Kerr's all set to touch skyscraping success post her pregnancy.

Bearing testimony to this fact is her first nude photo shoot after giving birth to son Flynn for the latest issue of Harper's Bazaar.

According to The Telegraph, the Aussie model is seen lying on a bed in a seductive manner, with just a headscarf and pair of heels, News.com.au reported.

"And yes, she was still breastfeeding," News.com.au quoted him as saying.

"And having seen her this week, I think she still is," he added.

Although Kerr is enjoying motherhood at the moment, she isn't ruling out a change of career.

The model admitted that she might follow her husband into acting, if someone approaches her with an interesting offer.

Mel B unveiled as new face of weightloss company 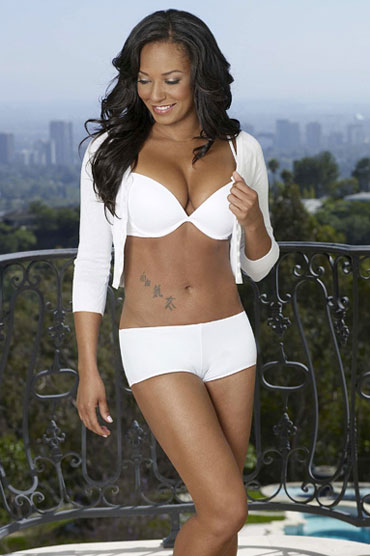 Pop star Mel B has been unveiled as the new face of weightloss company Jenny Craig's Australia and New Zealand branch after she took their help in shedding the pounds she piled on when pregnant with daughter Madison.

"I was eating, literally eating morning, noon and night, and it didn't matter what time. I was just eating. I was a house," Contactmusic quoted her as saying.

"I've my humps and bumps, but when a newspaper described my shape as the 'bootylicious, curvylicious, post-baby body of Melanie', I knew I had to do something. I had to get the eating under control," she added.

"I have already been exercising but what I need is a little push to help me start eating sensibly," she added. 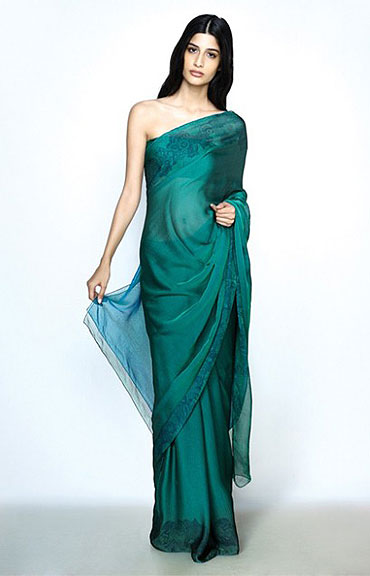 Hermes has launched a limited-edition line of saris for sale to its customers in India, which will sell for 6,100 dollars to 8,200 dollars.

The 27 designs will be based on the luxury label's famed scarves.

Patrick Thomas, chief executive of Hermes International, told the Financial Times that the saris were a 'wink' to Indian consumers.

"There have been a lot of connections between Hermes and India," the Daily Mail quoted Thomas as saying.

"Designing these saris for Indian customers is a way to pay light homage to India, and say, 'Hermes admires India and has a lot to learn from India,'" he said.

Hermes' Bertrand Michaud, regional managing director, for India, Middle East and Southeast Asia, said that the garments would be sold with a metre of extra twill silk so that, in accordance with tradition, a top can be tailored in the same fabric.

Now, a bra that 'moves with figure' giving you a sexy, shapelier look 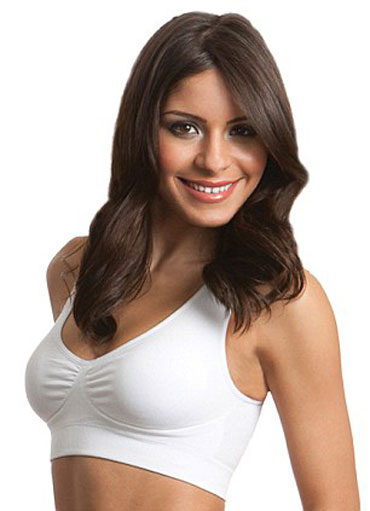 Shopping for bras is a daunting task for most women. In-store fittings with underwiring, hooks or adjustable straps are far from comfortable, leaving many to find the middle ground.

But now lingerie designers have come up with the ultimate solution -- a sports bra-style garment that has been designed to move with the figure, moulding to the correct cup size.

The Genie Bra has sold a million units in the US in just one week and sold out in four hours online in the UK.

The bra, available in dress sizes 8-22, retails at 39.99 pounds for a pack of three. It can also be worn to sleep in, during exercise and by expectant or nursing mothers.

The wide comfort band provides lift and support whilst the seamless cup design makes it almost invisible under sheer shirts and tops.

It also comes with insert pockets to offer more coverage by slipping in the extra soft full coverage support pads for an enhanced, sexy, shapelier look.

"Over 80 percent of women in the UK are wearing the wrong size bra," the Daily Mail quoted a New Image Genie Bra spokesperson as saying.