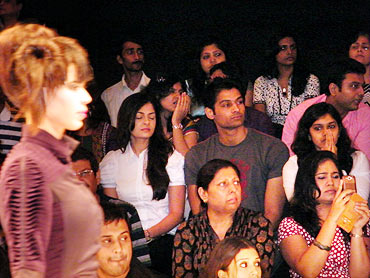 So the glitz and glamour continues.

I enter the hotel and realise I am no longer alien to this world. Surprisingly, I recognise some faces already. Some are designers, some models. I don't know if I can call that an achievement, but I am no longer intrigued by the long legs or the skimpy clothes, nor do they give me a complex.

I'm not turning around to check out a new model who walks past me and am slowly getting used to the ways of the people here. Some of them are still weird and fake. I don't know which world they think they belong to? Did they drop down from the sky? Well, if they think so, that's not my problem.

Fashion week is about clothes and designers. Even a student of fashion and arts wants to be treated like a celebrity. The way they talk, play with their hair, talk about fashion, I think to myself, 'C'mon girls, get some air. I can't imagine what you'd do if you were real models!'

Earlier today my editor asked why I was wearing a salwaar-kurta to a fashion week. Honestly, I hadn't even given it a thought till he brought up and the fact that I had attended a fashion show the previous day had done nothing to alter my choice of clothes on Day Two. But then these girls here are already discussing shoes, accessories. Attention to detail and all those things...

Wait a minute. Did I mention that a whole section of the nation outside this little world is either fasting, attending a strike or sharing a Facebook status about Anna Hazare fighting against corruption in the country? I can't help but ignore the movement.

'Which is bigger -- the Anna movement or the Fashion Week?' 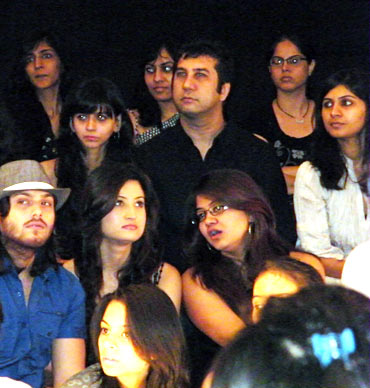 Early this morning bus drivers went on strike and by afternoon, there was news that even a section of the railways had joined in. Although the thought did cross my mind, I do not feel like asking these people about their views on corruption or what they are doing about it, for fear that they will boycott me altogether for the rest of the week.

I'm here on a different assignment -- I better stick to it.

I am no Konkona Sen Sharma from the movie Page 3, who could stick a mic under a celebrity's nose and make him/her realise that a different nation outside was fighting for a noble cause, or what seemed like one. But seriously, which one is bigger? The Anna movement or the Fashion Week? I have no time to think. One show lined up after the other.

While we are waiting to file in before a showing, I have one more realisation. No matter how educated these people are or how influential their families may be, they have absolutely no sense of decorum. They do not have the patience to wait for their turn outside and shamelessly inch their way forward -- and nobody complains.

Inside, the drill continues on the ramp -- a young designer and a few models -- it's probably their second home by now. How difficult must it be to change outfits so quickly, I wonder.

What if a strap gives way? Are they eating well? How do they cope up with the pressure to perform?

In an interview with a designer, she told me how much effort goes into every show and how models and designers are ignored when there is a celebrity showstopper. The media is interested in Bollywood stars, the sensational and not so much in the business of fashion. Perhaps I am turning into one of them. But some of these characters here, I still fail to decode.