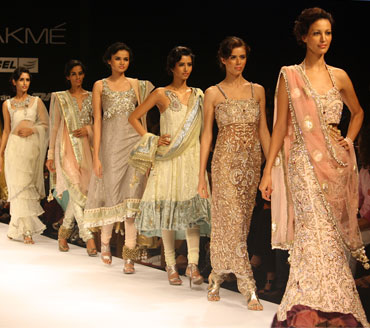 Divya Nair never went to a fashion show nor had she crossed paths with a supermodel in her life. And then Lakme Fashion Week happened to her. Nair writes about her experience for rediff.com

This was the first time I was attending a fashion show and I am glad that Lakme Fashion Week Winter 2011 will be the first memory of it -- because it is the biggest fashion extravaganza in Mumbai.

As I entered the Grand Hyatt Hotel in Mumbai all I could see were tall, lean beauties who can give any girl a complex or glam dolls who pose for 'highly-paid darjis' (as I would earlier call them). Not to mention the high-profile or seemingly high-profiled guests who were themselves dressed like celebrities. They pretended like they knew everyone, exchanged hugs and kisses. For a second, I felt like I was in a different world of people. Fake or real, I can't still say.

And after waiting for half the day, I finally attended my first ever fashion show. It was Jatin Varma and Payal Singhal -- two names I must confess I hadn't even heard of.

'If I'd seen him on the streets, I probably wouldn't recognise him' 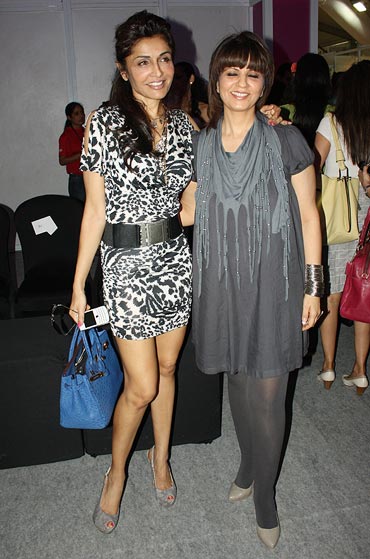 Seated in the third row, waiting for the show to begin, I was reminded of a scene from the movie Fashion. Only, I wasn't an aspiring model and I had no one to introduce me to the who's who in the room. But I could spot some faces like Twinkle Khanna, Karisma Kapur, Chunky Pandey (couldn't recognise him at first), Tanisha (Kajol's sister), Padmini Kolhapure and Poonam Dhillon.

I also think I spotted singer Harry Anand (or at least I think that's his name). If I'd seen him on the streets, I probably wouldn't recognise him either.

Just when I was thinking that this was a star-studded event already, with young girls and men dressed up all prim and proper, each trying to impress, I spotted some middle-aged aunties in their salwar-kurtas loaded with jewellery and makeup.

'I realised why people ogled at them so much' 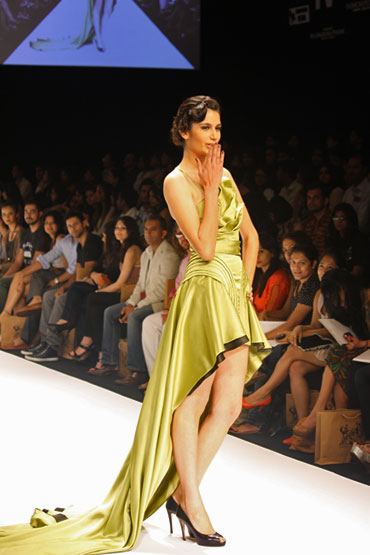 I was wondering, who could all these people be and what were they doing at a fashion event? A member from the audience told me they were buyers or wives of buyers who just come to check out the collections.

Soon, the music got racy and the models showed up one by one. The spotlights shone brighter than ever. The girls looked stunning. I realised why people ogled at them so much -- they were worth ogling at!

Some of the outfits were amazing, others put on great attitude. I had seen some of the models at the fittings last week and I must say they looked far more attractive today.

It sure isn't an easy job to brave that look and attitude when you have a thousand eyes watching your every move.

Then there was another learning -- the music has a major, major role to play. It creates the necessary ambience and I suppose takes the attention off the bad designs. 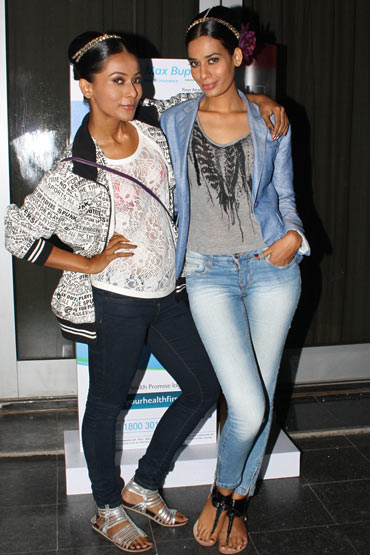 So Payal's show began with the classic In Aankhon Ki Masti Mein and the roar of applause it received from the audience made me feel at home. The Hindi song seemed like the only thing I could relate to in this alien world.

The fact that the show was opened by a non-Indian model in a lehenga made the experience more special. I realised that no matter how global we are about fashion, the emotion remains the same. We are Indian at heart and each time we see something Indian, we appreciate it.

It's practically the end of Day One and I have a long commute ahead to get home -- the other end of Mumbai, where life isn't all that glamorous and you don't wake up looking as beautiful as Madhuri Dixit.

So this is me signing off. Tomorrow will be another day and another experience, I suppose. But I am no long a fashion week virgin -- I can safely say that -- and life is never going to be the same.