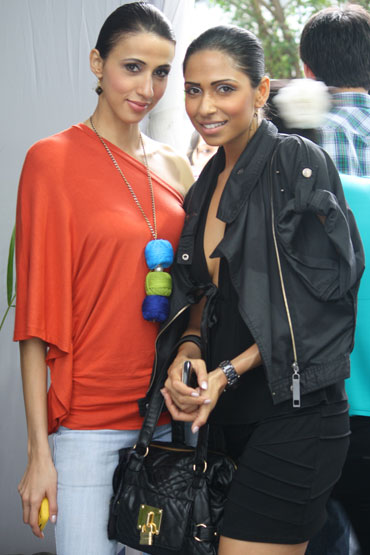 As glamorous and beautiful as the ramp looks on the outside, the real action happens backstage. Model Alesia Raut takes us backstage and gets talking to her fellow model, the sexy Candice Pinto.

Alesia Raut: This is Candy she's been in this industry for the longest time...
Candice Pinto: But not longer than her!

AR: She's a diva and an idol for every model. You ask any model and she'll tell you that I want to be like Candy and I want to be in her shoes.
CP: There are actually two models in this industry that are considered to be the most hardworking and most regular they're us! And thank you Alesia for calling me a diva. But she's the real Diva

AR: Ok. Ok now you need to tell us what is happening backstage!
CP: Alright so besides the fact that you are shooting a video of us, there is a lot of chaos. There's so much that is to be done, make-up, hair if you happen to catch us we might just ram into you! The shows look beautiful as the shows look on the ramp but believe us it takes a lot of hard work that goes into it.

AR: In fact we change our dresses in a minute
CP: Actually, less than a minute

AR: And we do it fabulously. IF you guys learn from us, you will save a lot of time and you will be able to do a lot of other things in that spare time.
CP: No the men can't do it because they cannot multi-task!

AR: So there's a story behind Candy's name do you want to tell us?
CP: We just found from a Brazilian model that my surname, Pinto has two meanings it means 'chick', apparently. When I first heard it I thought it was d**k. But then she said it's actually both! So now my new name is Chick D**k. 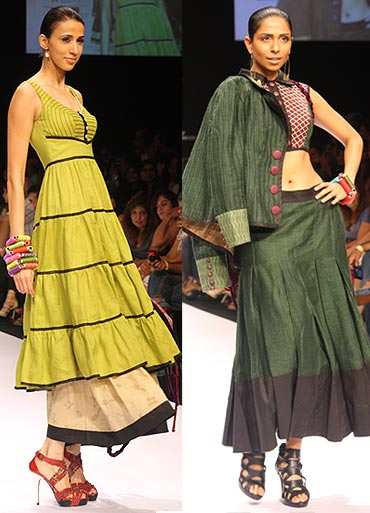 Alesia Raut: How do you react when someone calls you sexy?
Candice Pinto: Well if it's a guy, I don't really react because it's a guy after all. But if a woman does it then I really take it as a compliment because it is difficult to get a compliment from a woman!

AR: So Candy does this thing on the ramp which I try to imitate because it looks really sexy. Could you do it for the audience? (Candice Pinto demonstrates, see video)

CP: So what do you think of plus-size models?
AR: I know I don't look a plus-size model but the important thing is to be fit. India has always appreciated girls with lots of curves so rather than following international trends, we must make them follow us.
CP: I agree!

AR: Ok Candy, what's your take on celebrities as show stoppers or show starters?
CP: We call them Shopper's Stop because it's so cliched because (too much is made of) show-stoppers. Now we even have Show Beginners! I can understand if its' someone with a personality like Amitabh Bachchan or Kabir Bedi (who walked the ramp last night). But otherwise we have these socialites coming on and off. I think it's so stupid because the models do such a good job. I think you should just stick to having models as showstoppers.
AR: I sometimes feel the importance of the design that gets ignored because what gets written is about the celebrity and not the garment. So if you're here to do business, let's make it about the garment and no the celeb. I still love them but I feel we must control them more!

AR: Lady Gaga, a fashion disaster or fashion icon?
CP: I think she's pretty cool. She's a fashion icon but because no one else can carry that she carries off what she does. It is nice to have someone who has such a strong personality. And she can sing so that makes it even better! So definitely, a fashion icon!
AR: After Madonna, the one celeb who has captured our imagination is Lady Gaga. It's nice to watch someone getting away with that look.

AR: Your take on the 10-year-old model Thylane Blondeau posing in the recent issue of Vogue magazine.
CP: She looked really stunning and for a girl her age, she looked really beautiful and stunning. And why not? You have these daily soap operas (in India) and have child artistes performing day in and day out and you don't call THAT child abuse! I saw the pictures and I thought they were very beautiful.

AR: As far as child abuse is concerned we see so much outside the fashion industry too on the streets where kids are begging or (underage) domestic helps working in homes!

AR: Ok final question. So I believe there is a study that suggests guys fall in love at first sight more often than women. Do you agree?
CP: I don't think so. Because it's usually love at first sight. And that is usually the case with the guys. It's bulls**t

AR: Bang on, Candy! Ok so that's all we have time for right now. Thank you so much for watching!