IN PICTURES: 66 years of the bikini! As the two-piece celebrates it's 66th birthday this week, we take a look at how it has evolved in the last six decades.

Women in swimsuits -- we can never get enough of them.

But what's the story behind the sexiest of them all, the one that has stayed in style for generations, outlasting possibly every other garment on the planet?

Who invented it? Who popularised it? What kind of changes has it undergone with the coming and going of each decade?

The bikini turned 66 yesterday, and today we bring you a brief history of this tireless two-piece swimsuit, which looks set to follow us into the future -- indefinitely. Read on! 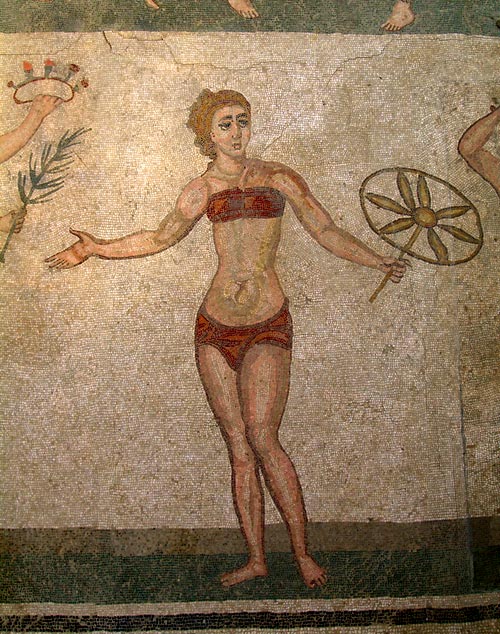 Image: A close-up of the mosaic at the Villa Romana del Casale, depicting women in bikinis
Photographs: Pavel Krok/Wikimedia Commons

This is the first evidence of bikinis having existed in ancient times -- a mosaic in the Villa Romana del Casale, a Roman villa built in the first quarter of the 4th century AD and located just outside the town of Piazza Armerina in Sicily.

Officially, the mosaic is called the 'Chamber of the Ten Maidens', but it is more popularly known as 'the bikini girls' -- the women depicted in the artwork are shown exercising in garments that would pass off as bikinis today.

From one piece to two 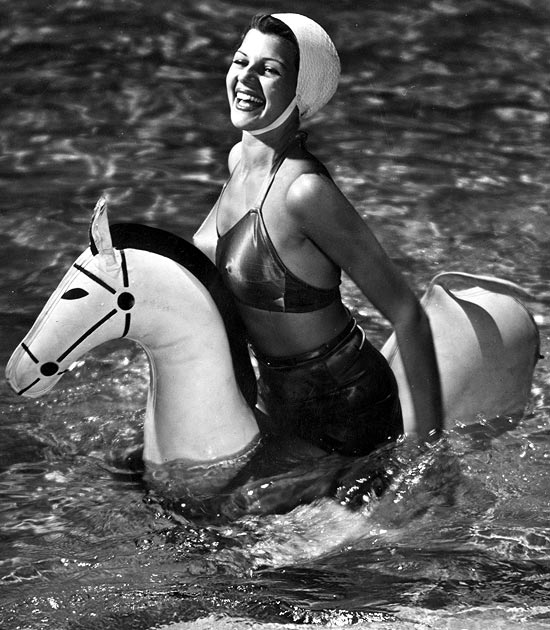 In the 1930s, the one-piece swimsuit experienced lots of changes -- sleeves disappeared, backs and necklines plunged, sides were slowly cut away. Moreover, fabrics like latex and nylon began the body-hugging trend.

Then in the early '40s, Hollywood's glamour brigade -- Rita Hayworth, Ava Gardner, Lana Turner and other silver screen sirens -- started popularising two-piece swimsuits. Pin-ups of them posing in such saucy suits became all the rage.

Here Rita Hayworth is seen posing in just such a costume; the photgraph dates back to 1940. 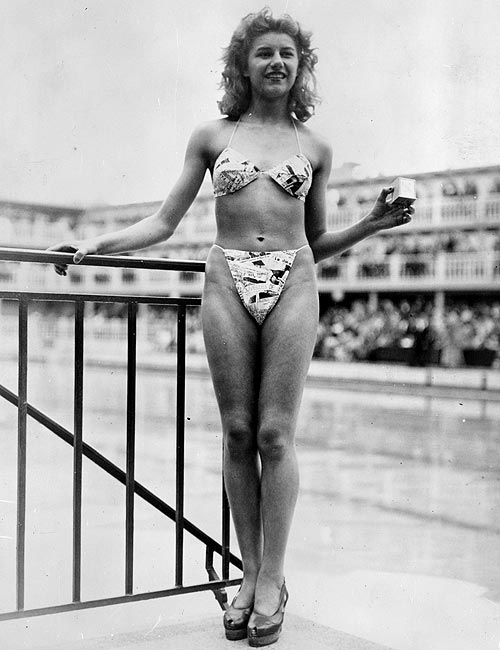 Image: Micheline Bernardini modelling Louis Reard's bikini on July 5, 1946; she is seen holding a small box into which the entire costume can be packed
Photographs: Keystone/Getty Images

But of course, it was to be the fashion-forward French who would finally come up with the modern bikini as we know it.

By a curious twist of fate, French car engineer Louis Reard found himself running his mother's lingerie boutique in Paris in the 1940s. Reard was in competition with fashion designer Jacques Heim, who was trying to establish a name for himself by coming up with what he called the 'world's smallest bathing suit'.

Heim's bathing suit was a two-piece and the bottom was large enough to conceal the wearer's navel. He debuted this design in May of 1946 and called it the 'Atome', to go with its reputation as the smallest swimsuit in the world.

Not to be outdone, Reard created a two-piece with a much smaller bottom half that exposed the navel and he called it the bikini after Bikini Atoll, a South Pacific island where America had just exploded an atom bomb as part of their nuclear testing programme on July 1, 1946. He advertised his creation as "smaller than the smallest swimsuit", so it's hardly surprising that he was unable to find a model who would be willing to wear his design.

Reard finally hired a 19-year-old nude dancer by the name of Micheline Bernardini to introduce the bikini to the world on July 5, 1946, at Piscine Molitor, a public pool in Paris. It was a string bikini with a G-string back, patterned with a newspaper print all over. Reard's bikini evoked a negative reaction in America, however -- across the pond, his design was looked down upon as an immoral and sleazy garment which was not for respectable ladies of society.

It was only the unabashed sex symbols of the time who were seen in bikinis for glamorous and titillating photoshoots, such as American pin-up Bettie Page, seen here in her heyday posing in a revealing two-piece -- she was one of the earliest Playmates of the Month for Playboy Magazine (January 1955) and is still referred to as the 'Queen of Pin-Ups' today.

As the '50s wore on, Hollywood started taking their cue from such bold and beautiful models, slowly warming up to the idea of bikinis on the big screen. 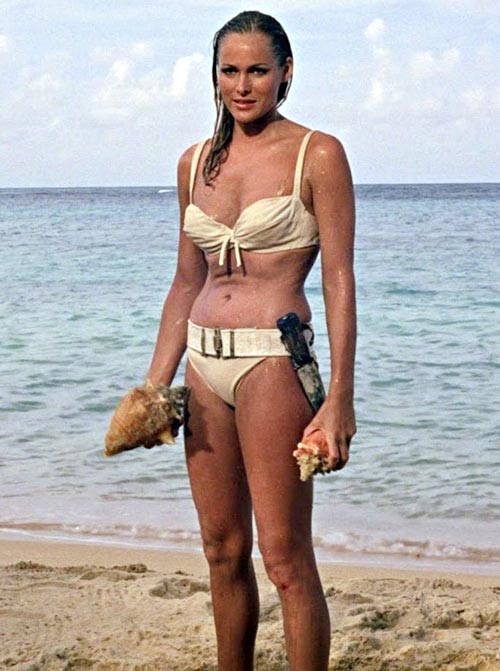 When Ursula Andress stepped out of the sea in a white bikini for a scene in the 1962 James Bond movie Dr No, it sealed the deal -- the bikini was here to stay.

Andress' iconic swimwear and smashing good looks turned the two-piece into a desirable, sexy success and her career soared as a result.

The actress would go on to state in an interview in 2001 -- the same year the iconic garment was auctioned for a whopping $61,500 at Christie's -- "This bikini made me into a success. As a result of starring in Dr No, I was given the freedom to take my pick of future roles."

The '70s: From the big screen to beaches 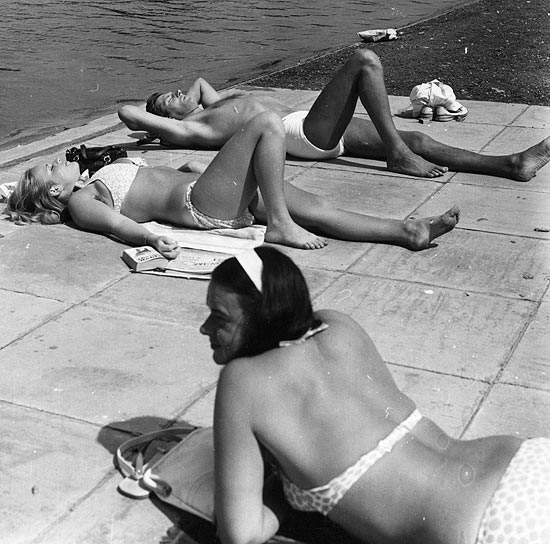 By the time the '70s rolled around, bikinis were no longer just for the rich and famous -- they were immensely popular and fairly common, so that ladies all over the world were stepping out in them on the beach, at the pool and to sunbathe in parks.

This image dating back to July, 1970 shows sunbathers lounging by the Serpentine (River) in Hyde Park, London. 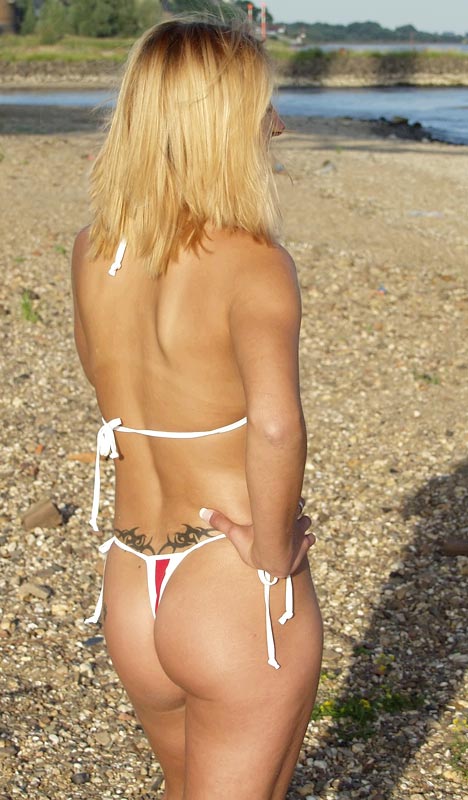 The liberal '70s also saw the popularisation of the thong bikini in the Western world. South America, particularly Brazil, was responsible for this swimsuit style and although not for everyone, the daring cut was seen on several daring ladies in Europe and the US too. With the '80s, it seemed that bikinis had taken every conceivable size and shape imaginable -- strapless, bandeaus, halternecks, string...

A particular feature of this decade was that the cut of all swimsuits became significantly higher, going right up past the hips and revealing a lot more side leg and bottom. Seen here is dance group Legs & Co in 1980, a regular feature on BBC TV's 'Top Of The Pops' weekly pop music programme then, showcasing the many and varied patterns of the time. 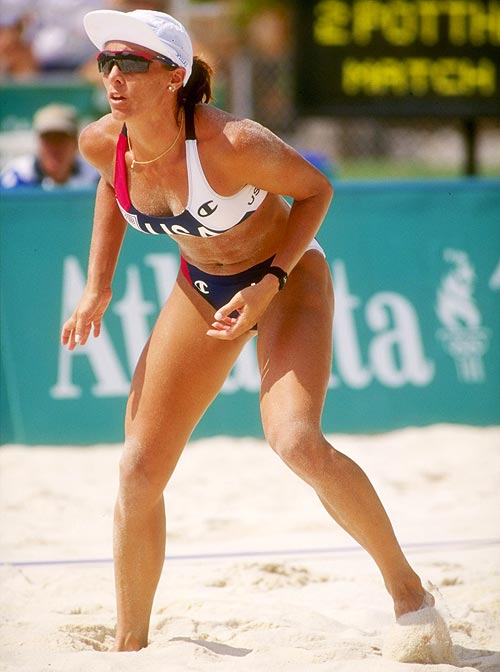 In the 1990s, the bikini managed to stir up controversy once more -- it became the official uniform of women's Olympic beach volleyball in 1994. At the time, several sports officials were against it and teams like Australia even opposed the move, calling it 'exploitative'.

But the two-piece weathered the storm and stuck on -- and it's hardly surprising that the sport started attracting a much larger audience as a result! 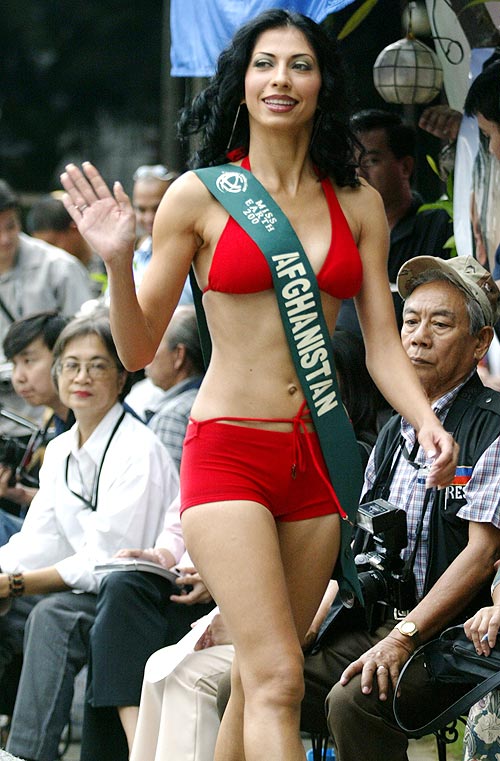 Sixty-six years on, there are still cultures that strongly condemn Reard's legendary design.

In 1996, opposition to the Miss World pageant in Bangalore led to the swimsuit round being shifting to the Seychelles.

Then in 2003, Miss Afghanistan contestant Vida Samadzai, the first Afghan woman to participate in an international beauty pageant since 1974, created a furore in her home country when she appeared in a red bikini during the Miss Earth pageant's press presentation. The Afghan Supreme Court passed an official statement that such a display of the female body goes against Islamic law and Afghan culture.

The epitome of sensuality And then there are millions across the world who simply love the bikini and all it stands for.

While in India the Kingfisher Calendar featuring bathing beauties is looked foward to with much anticipation each year, abroad it is the annual Sports Illustrated Swimsuit Issue that receives the same kind of enthusiastic response.

What's more, the models who bag these plum assignments are no longer looked down upon. Instead, they become fashion sensations and superstars -- from Katrina Kaif here in India to Czech catwalk queen Petra Nemcova (pictured), most make it to the big leagues. 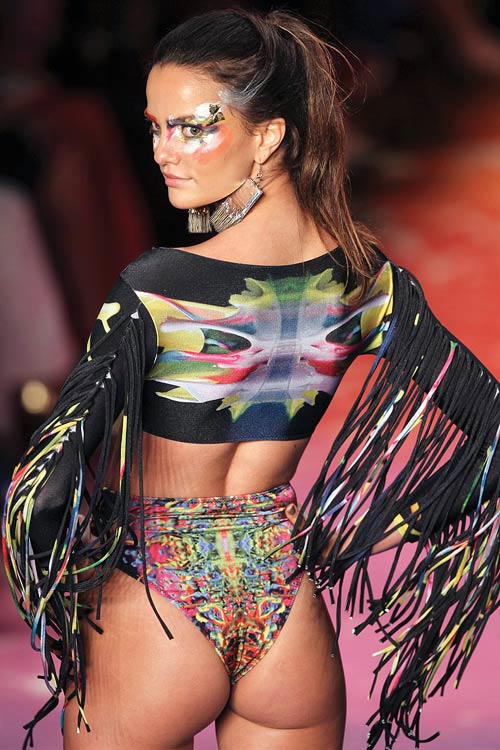 There are specialised swimwear fashion weeks held all over the world that attract international media coverage and the worth of today's swimwear industry is a whopping $13 billion. 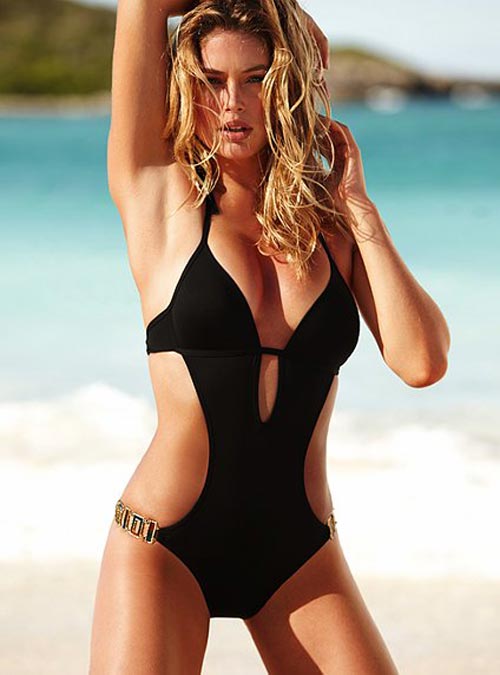 This year, it's the monokini -- a one-piece cut-away that is inspired by the bikini -- that is particularly making waves. Next year, who knows what will be 'in' and what will be out?

One thing's for sure, though -- the bikini, in whatever form, shape or size, is going to be around forever fashionwise.