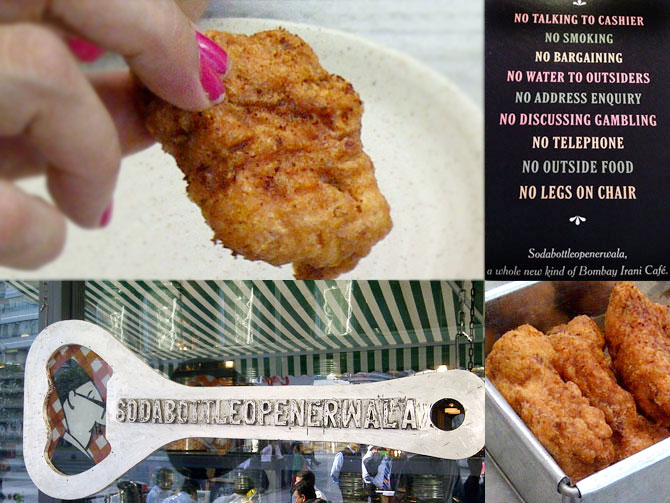 New Yorker Aseem Chhabra is entranced by two Dilli restaurants, one a landmark, the other a new eatery in town.

Earlier this summer I was in Mumbai working on an article on new restaurants in that city. My focus was on restaurants that had been launched by expats, often Europeans, or had American chefs.

While I discovered some fascinating eateries in Mumbai, I was often told that Delhi was way ahead when it came to restaurants. This was a new phenomenon, something that had happened in the capital in recent years.

In the last few weeks, I have been visiting some of Delhi's iconic restaurants. On Sunday night I ate a delicious and very inexpensive thali meal at the Andhra Bhavan canteen.

The food was simple, with a very home cooked touch. It was really spicy too.

The non-vegetarian thali included mutton curry and fried chicken. I followed the meal with a healthy helping of halwa to tone down the effect of all the spices that were playing games with my senses.

What amazed me was how popular the canteen was with students, middle class families, many perhaps from Andhra Pradesh, who found the food that connected them to their home.

I was told there is a long line during lunchtime, when other office workers show up for the very popular and reasonably priced food option in Delhi.

Would you like to review a restaurant for us? Send in your experiences and opinions of eateries to getahead@rediff.co.in (subject line: 'Restaurant Review') along with your name, age, contact details and a photograph of the restaurant if possible. We'll feature the best entries right here. 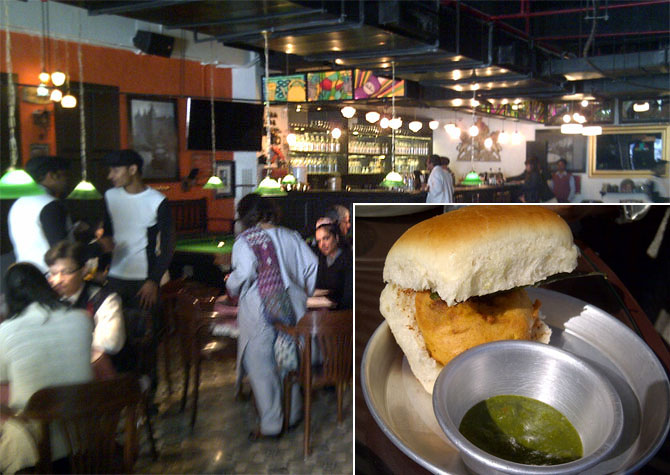 On Monday it was the office employees in another part of Delhi -- rather in Gurgaon -- who showed up on the opening day of a new Mumbai style (everyone was using the name Bombay) Irani restaurant -- Soda Bottle Opener Wala, located in the Cyber Hub section of the Cyber City area in Gurgaon, close to the Ambience Mall.

In the middle of the Cyber Hub, a new plaza area has come up, surrounded by tall glass buildings that house mostly international multinational companies.

The plaza is occupied by brand name coffee shops -- a large Dunkin' Donuts and an even bigger Starbucks.

In the midst of all this with a covered sidewalk seating area is the new Soda Bottle Opener Wala, one of the first Irani restaurants in the greater Delhi area.

The inside had the look of a classy Irani restaurant -- stain glass windows, a bakery selling cookies in old jars, and lots of Parsi artifacts.

In the middle, right next to the bar area (the restaurant does not have a liquor license yet) there was a pool table.

I sat outside with friends, including childhood friend Atul Sikand who now runs a rather successful food blog called Sikandalous Cuisine, where he shares his recipes and those of his followers. 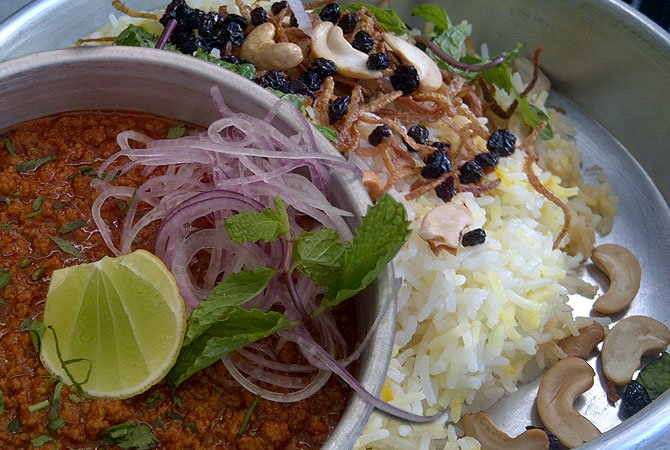 The mid-November sun, along with a cool breeze, gave a pleasant touch to the surrounding.

We could have been in any part of the world -- in Europe, Japan or America -- except for the fact that there were a lot of Indian faces on the plaza and in the restaurant.

We started with a cooling plum mint drink (later, I also drank a glass of ice cream soda). Our meal included Vada Pao (the restaurant's menu has Mumbai’s popular street food items), Keema Pao, Sali Boti and a mutton Pulao (I was clearly told it was not a Biryani).

It was a lovely leisurely lunch that lasted over two hours. During the afternoon we met the restaurant’s chef Sabyasachi Gorai, who is also the Chief Mentor and director of the Olive Culinary Academy in Delhi, and Mohit Balachandran, a food and menu consultant at the new eatery and a specialist in Indian street food.

Office workers -- most of them young, with a lot of interest in exploring different cuisines -- appeared excited by the new addition in their area. Many stopped by to check the restaurant’s menu and quite a few decided to eat there even though there had been no reviews or word-of-mouth chatter about the eatery.

It was a great way for a new food place to take off on its very first day.

Would you like to review a restaurant for us? Send in your experiences and opinions of eateries to getahead@rediff.co.in (subject line: 'Restaurant Review') along with your name, age, contact details and a photograph of the restaurant if possible. We'll feature the best entries right here.