'Quality of IITians leaves much to be desired': Do you agree? 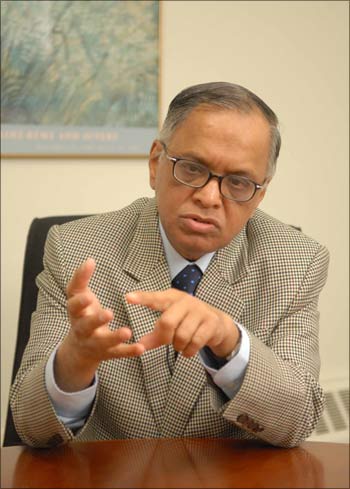 Infosys chairman emeritus N R Narayana Murthy had some caustic comments regarding the academic standards of IITs across the country, following which IITian and celebrated author Chetan Bhagat hit back with his own opinion. Whose side are YOU on?

Infosys Technologies founder Narayana Murthy recently passed judgement on the academic superiority of students at IITs across the country, suggesting that the quality of those who enter IIT has dropped largely due to coaching classes.

This comes close on the heels of comments by environment minister Jairam Ramesh, an IITian himself, who said that the faculty at IITs and IIMs is far from being world class.

Needless to say, the Infosys head honcho is now on the receiving end of tirades from IIT supporters. And most prominent among them is writer Chetan Bhagat, an IITian himelf, who shared via his Twitter feed that "It is ironic when someone who runs a body shopping company and calls it hi-tech, makes sweeping comments on the quality of IIT students".

Tell us what you make of this controversy. Do you believe Murthy's comments were uncalled for, or that perhaps there is some truth to them that IITians like Bhagat are reluctant to face?

CLICK HERE! Pick a side and voice your opinion on the matter!