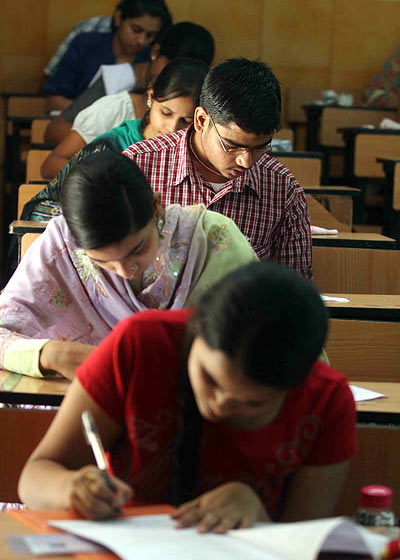 Image: What do you think about the UPSC's CSAT? Should it be discontinued? Tell us.
Photographs: Sahil Salvi/Rediff.com Anil Kumar Mishra

In the last few weeks, there's been a lot of controversy surrounding the Civil Services Aptitude Test.

With just a few weeks away from the scheduled date of the examination -- the CSAT is scheduled on August 24 this year -- here's what you need to know about the test.

An aptitude test paper of 200 marks, popularly known as Civil Services Aptitude Test or CSAT was introduced in Civil Services Preliminary examination in the year 2011 to select the candidates for the main examination.

Recently, there has been a lot of hullabaloo on the nature of questions asked in the CSAT.

The opposition to the CSAT is unprecedented.

Hence, before we altogether discard it, let us analyse the pros and cons of this paper which was introduced by a sound policy based decision.

If we get into the debate of 'fact Vs analysis', CSAT goes with the analysis part.

In the Civil Services preliminary examination of 2010, UPSC for the first time changed the nature of questions to more of analytical in nature than factual.

Even the question papers of humanities subjects were tried to be made analytical.

The year saw a drop of around 7 per cent (35.4 per cent from 42.2 per cent) in the number of students taking the examination in Hindi medium.

However, since the proportion of candidates passing the preliminary examination for different subjects was maintained by and large due to scaling; it didn't become a bone of contention.

But in 2011, the number of candidates writing the examination in Hindi medium dropped drastically.

The Hindi medium candidates saw the CSAT paper as the culprit.

Since its introduction in 2011, CSAT has been evolving in the form of changing the ratios of questions from different test areas.

While it could be assumed that Reading Comprehension passages would benefit candidates from Hindi medium and humanities stream; it hasn't happened so.

The protesting students have alleged that the text used for RC passages has been terse and difficult to understand. But, that is what the RC questions try to test -- your ability to make inferences, judgements and conclusions out of the given passage besides understanding the gist and tone of the author.

The 2012 paper of CSAT consisted of large number of passage-based questions and many with much closer options.

In 2013, the CSAT paper consisted of less no of passage based questions in comparison to 2012 and with less ambiguous options along with increased no of quantitative aptitude questions.

This led to a drastic increase in scores of persons comfortable with aptitude.

However, for most students from the vernacular medium, the exam itself was a nightmare.

This year, UPSC claims to have a minimum cut-off of 30 marks in General Studies paper-I, which, according to me is futile at least for general category candidates.

Even in a hypothetical scenario where a certain candidate secures 200 marks out of 200 in Paper-II, a general candidate would still be required to score 41 marks in paper-I.

In such a situation, an individual cut-off of only 30 marks in GS paper-I serves no purpose.

The cut-off limit certainly needs to be revised upwards for selecting candidates with a more balanced score.

A competitive cut-off in General Studies paper-I and a balanced aptitude paper is perhaps the solution to this malady.

Meanwhile, the translation section of Reading Comprehension passages must be reviewed, as it may make a handicap of Hindi medium candidates.

Some pointers on the Main examination:

Traditionally, the Civil Services Examination has been considered an examination for the humanities stream.

Most graduates from science and engineering backgrounds have been passing the examination using humanities as optional subjects.

This was the case at least till 2009 barring a few spikes in terms of very high scores in science and/or engineering subjects.

In the course of experimentation, the UPSC has continuously been changing the equations since 2010.

The science and engineering optional subjects are no longer exclusive

The year 2010 saw a huge marking scheme in optional subjects vis-a-vis the papers of General Studies.

This created an impression among the candidates that GS is a poor cousin among the three subjects (GS and two optional subjects).

A sort of relation was established that optionals will give you success and GS can at best help in securing a better rank.

In the subsequent years, UPSC tried to decrease the marks awarded in optionals and thereby create some equality among the GS papers and optional subjects.

In 2013 again, we saw higher scores in the single optional subject making it the deciding factor for success.

The only argument in its favour is that the candidate is free to choose the optional subject and it gives him/her a chance to succeed on the basis of his/her strong area.

The same argument can be countered on several grounds too.

There are many subjects, for example computer science which isn't available in the menu of subjects.

Also, the candidates should be tested in areas of relevance for her future career rather than testing something which may not have even a distant relation to his/her career.

The talks of reduced cut-off in Main examination are actually a misnomer as it is directly linked to the liberty followed in awarding marks.

The changing nature of questions has not allowed the candidates to score high which is possible in fixed pattern of asking questions.

While the decision on whether or not the UPSC will consider the plea of vernacular medium students is pending, we must try and look at the larger picture.

The author has cleared the Civil services preliminary examination in 2010, 2011 and 2012 and has been educated in a Hindi medium school of Bihar in a rural area.