Take CHARGE of your life! Make your own DESTINY! 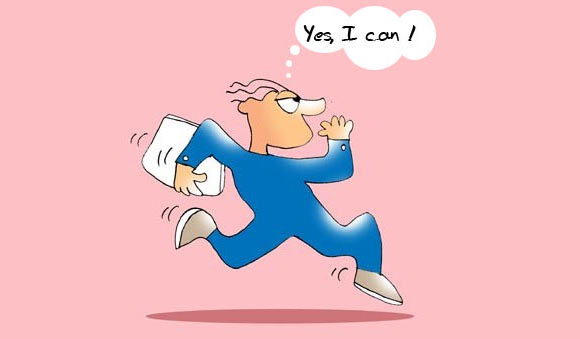 It’s a story straight out of a Bollywood blockbuster. But here’s the twist. One of the lead characters in the script could just be you! Learn from the role...

The story goes that a young man got picked up by the city cops for some petty crime.

As they interrogated him, they figured he was a college dropout, had struggled to find a job and generally led a wasted life.

He spoke reasonably well, and didn’t come across as a typical hardened criminal. When they asked him why he had let his life go astray, here’s what he had to say.

“I grew up in a home where we never had enough money. My father was a drunkard, and he was always beating me and my brother up. We didn’t have money to even buy textbooks. And no place in the house to study.”

Not too far from where that man was picked up by the police, a small function was being arranged to felicitate a young man from the nearby slum who had just topped the entrance exam and secured admission into a prestigious b-school.

They asked the boy how he did it, and this is what he had to say: “I grew up in a home where we never had enough money. My father was a drunkard, and he was always beating me and my brother up. We didn’t have money to even buy textbooks. And no place in the house to study.”

And then he continued, “It was clear to me that if I had to break out of this rut, I had to work harder, take charge of my life and make my own destiny. And that’s what I did!”

So as you might have guessed, the two men were brothers and yet their lives took very different turns. And the reason is simple.

One man chose to blame other people and circumstances for what happened to him. The other man chose to take responsibility for his own life.

Which begs the question: Which game are you playing? The Blame game or the Responsibility one?

Our lives are determined not by what happens to us – but by how we respond to what happens.

By blaming external factors, we take the responsibility away from us.

We then don’t feel the need to do anything to change the course of our lives because – we tell ourselves - it is someone else’s fault.

The better option is to take responsibility. Take ownership, and then take actions to drive the change you are seeking.

There’s an old saying, “When life gives you a lemon, learn to make a lemonade!”

When life hands you a lemon – that bitter little thing that can even bring tears to your eyes, you could either complain that life only gives you lousy stuff.

Or, you could work hard to get some sugar and water or soda, and create a refreshing lemonade.

Getting the lemon was not in our control. But making the lemonade is completely in our hands!

Starting today, stop complaining about what’s happening in your life.

Stop blaming other people – your parents, your upbringing, your boss, your luck. And start taking responsibility.

Take charge of your life. Tell yourself that the course of your life will be influenced not by what happens to you, but by what you do about it.

In our heads, there’s a one-seater cockpit reserved for a commander to pilot our lives. The pilot could either be Blame. Or Responsibility.
The choice is yours!