'Look up, darling! A new dawn awaits us' 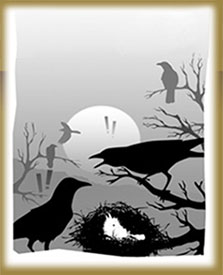 The White Crow by Neera Maini Srivastav is an inspiring work of fiction and makes for an interesting read across all ages. Read on for an excerpt from the book.

ALSO READ: 20 things you need to stop doing in your 20s

A white crow, Snowy is born to a couple -- the Corvos -- both black.

What follows is the collective discrimination of the Corvos and their subsequent exile from Cawland, under the dictat of Cawking- the reigning ruler of Cawland.

But Snowy has a special gift -- a talent that differentiates him from the rest of his clan.

What is that gift? How does the gift change his life and the people around him?

The White Crow, written by Neera Maini Srivastava is an inspiring tale of self-discovery with relevance across demographics in the modern world.

We bring you an excerpt from the book:

The crowds eagerly awaited an answer.

Cawking appeared proudly from his chamber and declared: "The white Cawli will live!"

There was a huge uproar, a virtual bedlam, a deafening pandemonium!

"The white Cawli," he continued, pronouncing each word clearly to create the desired effect on his subjects.

"The white Cawli will be punished with life outside the Cawli community. That's a punishment worse than death!"

Alas, the 'murder' was proud their king had after all voiced their cannibalistic intentions. They cheered Cawking for this verdict.

Papa Corvo returned home and broke the news to his wife. Snowhead was banished from the Cawli community. They would even have to shift to Cawntryside.

"How will we live isolated from all? How will we bring up our son?" cried papa Corvo.

But Mama Corvo, who was as solid as a rock, had quickly understood they had no time to grieve.

"We can take our faith to keep us good company," affirmed Mama Corvo.

She started collecting their belongings and wrapped Snowhead in a snug bag made of twigs, thanks to Papa Corvo's tool genius.

Papa Corvo took a good look around at his favourite Cawcity where they had spent their lives. But any separation is less painful than the separation from one's child.

Mama Corvo held his chin up and said almost prophetically: Look up, darling! A new dawn awaits us.

One day, just as Mama Corvo finished feeding Snowhead who was just a nestling with little tufts of white feather sticking out like tubes, they had an unexpected visitor. Solah, the Great Spirit of Cawland came to their humble residence.

At first Mama Corvo was suspicious of his surprise visit, thinking he had been sent by Cawking to get Snowhead. Papa Corvo had gone out food-hunting.

Solah bowed with his big black beak as a gesture of respect.

"God bless the great mother!" said Solah in a voice so soothing that Mama Corvo thought God himself had descended on them.

"What brings you here, Solah?" Mama Corvo wanted to get past the suspense as soon as possible.

Solah closed his beady eyes in a meditative gesture and then slowly opened them.

"I bring you no harm"…Snowhead is safe."

Mama Corvo looked perplexed but, in a weird sort of way, relieved.

However, Mama Corvoís nerves allowed him to continue,

"I have come to tell you a great secret. It's about Snowhead."

"Snowhead?" Mama Corvo began to get the jitters again.

"There is no need to panic. Your son has been blessed with an extraordinary gift!"

How could a blasphemy be a gift?

"The day Snowhead begins to fly, he will gain extraordinary powers to see and hear what none of us can. He will be able to read people's minds, their thoughts, their intentions… like an X-ray vision!"

Her eyes became moist with gratitude to the Source for planting an extraordinary creation in her womb.

"Solah, I cannot tell you how happy you have made me. I have been worried about him from the day he was born and then the way he was banished from Cawland…"

Solah interrupted, "All that will be over soon."

He closed his eyes and spoke with a voice that seemed to come from far away. "Snowhead will one day reign over Cawland. But you must not tell him of his powers, till he discovers them himself. Innocence carries the seed of wisdom," Solah concluded philosophically.

Then he began fluttering his feathers to assume his flight back.

Both of them bowed down to pay respects to Solah -- one in greeting and the other in parting.

Mama Corvo said, "Yes, Solah. We will do exactly as you say… but if ever I need you…"

Solah reassured her, "I will always be there. Just sit on a rock and call out to me. I will come."

Solah looked at the sky. "Alright, now I better rush. It's time for some droppings in the city."

Solah explained, "Oh, I have a minimum of fifty blessings a day that I must drop on the two-legged creatures that live below us. That's a commitment my soul made the day it got into this body."

Mama Corvo looked at Solah with a strange awe.

And within seconds, Solah was high up there, back to Cawland.

The Corvos would never be the same again.

Solah had ushered in the spring long before its time.