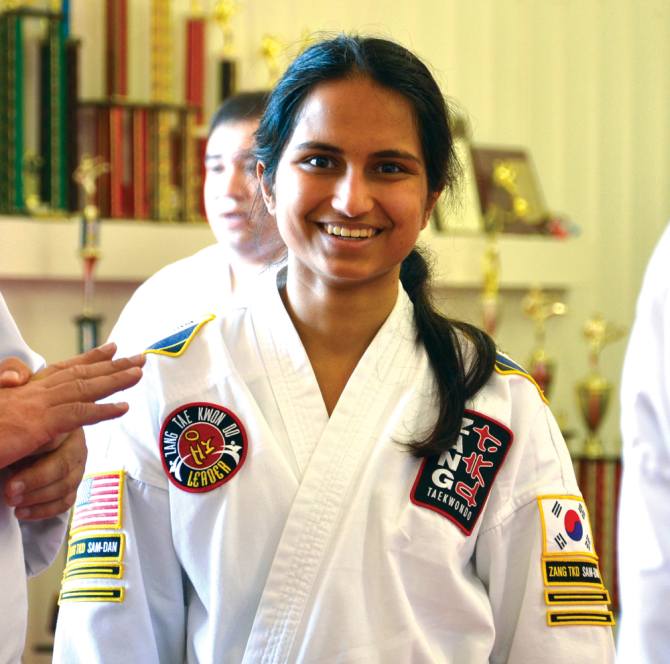 Among the participants at the Young Playwrights Contest at the Pittsburgh City Theatre four years ago -- which offered one-act plays by middle and high school students -- was Marshall Middle School student Surabhi Beriwal.

Her first-prize-winning entry, Ask Alyson, was about a girl who has an advice column in her school newspaper.

Meanwhile, Surabhi was also participating in the regional and national Science Bowl competitions as a specialist in human biology, was a member of her school orchestra, and studying classical Indian dance through her temple.

"I chose to make it (the play) a story of a foreign student from Spain getting acclimatised to American culture," Surabhi said. "I chose to make the young student to be from Spain because I have been learning Spanish and received a gold medal on the National Spanish Exam for all four years of high school."

"Writing is a major passion for me," continued Kolkata-born Surabhi, 15, who came to America when she was about 3 years old. "I write essays, plays and poetry. Though my latter plays did not turn out to be as good as Ask Alyson, I continue writing... I love numbers as well. I took AP Calculus BC in my freshman year of high school, and my National Science Bowl team in eighth grade won fourth place in the nation."

She has been doing taekwondo for 10 years, and in September 2013 she received her fourth-degree black belt. She is the secretary of her school’s speech and debate team and has received an All-American Award for having over 750 points from competing. She loves volunteering, and has been very involved with the local Rotary Club and her school’s National Honors Society.

Last year, she also became involved with an anti-bullying organisation, the Teaching Peace Initiative. Her group has found that students know how to refrain from bullying and using violence; they were just never told that peace is always an option.

"Using notable figures such as Gandhi and Martin Luther King, we illustrate the power understanding and compassion can have," Surabhi said.

Her parents Sushil and Shilpa Beriwal have been encouraging of every decision she has made, she said, instilling in her the best of Indian and American cultures.

"They both have taught me and my brother Sanjit how to follow our dreams and never give up," she adds. "In giving back, I am acknowledging the encouragement I have received not only from my teachers and my parents but also my nanaji, Umesh Chandra Aggrawal, who taught me how to live each day to the fullest. He passed away recently."

She has won praise and awards for her essays. Last fall Surabhi, now a sophomore at North Allegheny Intermediate High School, wrote in an essay for Allegheny Intermediate Unit gifted and talented journalistic writing and reporting: 'With the Internet and books, our ideas and words remain forever. What about the power of these words and ideas? What impact do they have? How many of us truly stop to ponder these questions before updating our Facebook statuses or sending texts? Considering there are more than a billion texts sent every day, the number of teens who do is most likely small. As for the 42 per cent of teens who could potentially text blindfolded, according to Mobl21, they probably don’t even read the texts that they send.'

It is such carelessness that creates problems, she warned, adding that the National Crime Prevention Council reports that more than 43 per cent of teens have been cyber-bullied.

'This problem only occurs due to thoughtless behaviour online,' she wrote. '...This can all change if we just take the time to think through our posts and texts before we send them.'