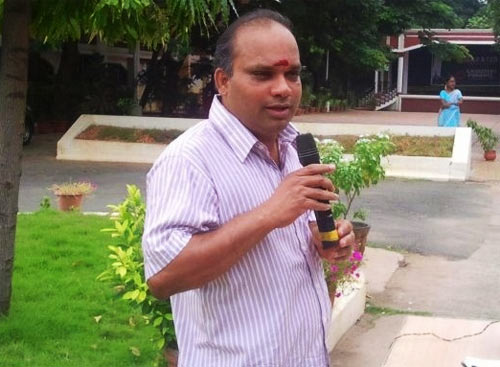 Alagu Perumal Ramasamy from Chennai has plans to supplement the diets of a substantially large population in a limited way by raising fruit-bearing saplings.

At a time when the union government is trying to push through the Food Security Bill, Alagu Perumal Ramasamy, an assistant professor who teaches international business at Chennai's Loyola Institute of Business Administration, has been working for more than two years to contribute to what he defines as food security in his own way.

Through a seemingly simple initiative which he calls the Indo-International Initiative for Billions of Fruit Trees, the professor has floated the idea of raising saplings of fruit-bearing trees across various schools, colleges and non-governmental organisations in Tamil Nadu which can then be given away to individuals or organisations across the state.

In the years to come, according to Ramasamy, fruits from these tress can supplement the diets of a substantially large population in a limited way.

Explaining his idea, the LIBA professor says, "With growing population and food inflation, the possibility of a food crisis is a real problem facing the country.

The same meal which cost Rs 60 five years ago, now costs Rs 120. My idea is simple: suppose a family needs 300 grams of rice but can afford only 200 grams, the trees raised under this initiative, bearing fruits such as mangoes or jackfruits, can supplement the additional 100 grams of food requirement for the family. The family can also make some money by selling pickles made from the produce."

While helping dalit women in rural Tamil Nadu start businesses in 2009, Ramasamy noticed large barren tracts of land which lay unused in villages. Engaged in low-skilled service jobs in the cities as they were, there was a general pattern of the village youngsters moving away from farming.

Convinced that the land would only get lost to real estate development if not used, he returned to Chennai and along with his wife started simple home experiments to see whether fruit saplings could be raised in large numbers using simple methods.

After his initial experiments were successful, he decided to approach his daughter's school, Good Shepherd Convent School, Chennai in 2011.

"I spoke to students from classes 6th to 8th and asked them to get plastic milk bags and a seed of any fruit that they consumed. Students got back with all kinds of fruits -- mango, tamarind, custard apple, among others and then planted them inside the school campus. In this way, we got about 1,400 saplings in three months," Ramasamy describes. 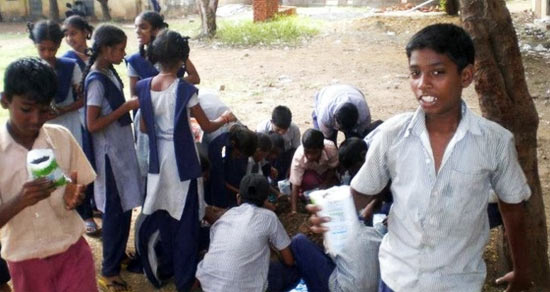 He then took the idea to his then bosses at LIBA, director Fr P Christie and the current deputy director Dr Emmanuel Arockiam, who were supportive of the idea and allowed him to raise similar saplings in a small area within the campus itself.

Ramasamy, along with 10-15 students from the 2010-12 PGDM batch at LIBA then planted these seeds in the campus, which generated close to 3,000 saplings.

The college then hosted the LIBA Green Summit in 2012 where the Minister for Social Welfare of the Tamil Nadu state, B Valarmathi and the Mayor of Chennai Saidai Duraisamy were impressed with Ramasamy's project and asked him to implement it at the municipality-run schools as well.

A pilot was carried out at a corporation school in Nunganbakkam which generated 1,200 saplings.

The saplings will now be given to the city corporation which will plant these saplings at various areas across the Chennai. 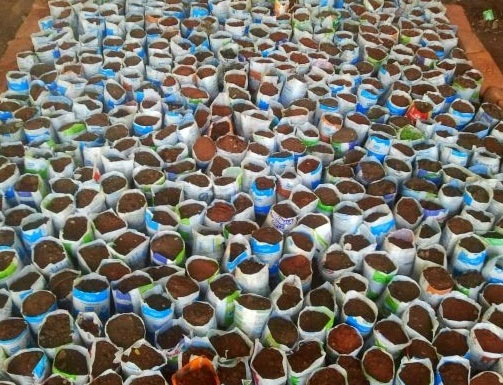 The professor will now implement the initiative at ten more corporation schools across the city. He is also in talks with some NGOs and individuals in Kerala, Bangalore and Hyderabad who are interested in replicating the initiative. The professor has also received a grant from a private company in based in Chennai.

So, what have been the roadblocks he has faced during the implementation of the project?

"It is about the attitudes of the people. People get cynical and say that it will take 15-20 years to see big results. Some people suggest that we should go for hybrids. The point is that even if ten people do a job well, the results will be visible."

As noble as the initiative is, to what extent can it dent the food security problem of a country that is dependent on wheat and rice?

Ramasamy says,"I agree that my initiative will not solve the food crisis. Food security is achieved at various levels and fruit tree plantation is one way of doing it. I am no scientist or farmer who can suggest ways of increasing rice or wheat yield. However, these fruit saplings are easy to grow in mass numbers at a very low cost which makes them an effective option."

Also, there is nothing novel about the idea of planting seeds and generating saplings. Most of us have done it at least once in our school. So what's different in what he has to offer?

"There is nothing new about this. While all of us have planted saplings in school, how many of us are actually doing it now. The important thing is not to forget about it. While technological innovation to these problems are fine, even a simple thing done consistently and regularly over a period of 15-20 years can solve a lot of problems," says the professor.

Interestingly, while his project is limited to Tamil Nadu as of now, he prefers to use the term 'international' in his initiative.

When asked about that, he refers to the book The Coming Famine by Julian Cribb and and says that food security is not a national but a global problem. He also hopes that this project can catch on in India and eventually spread across the world.