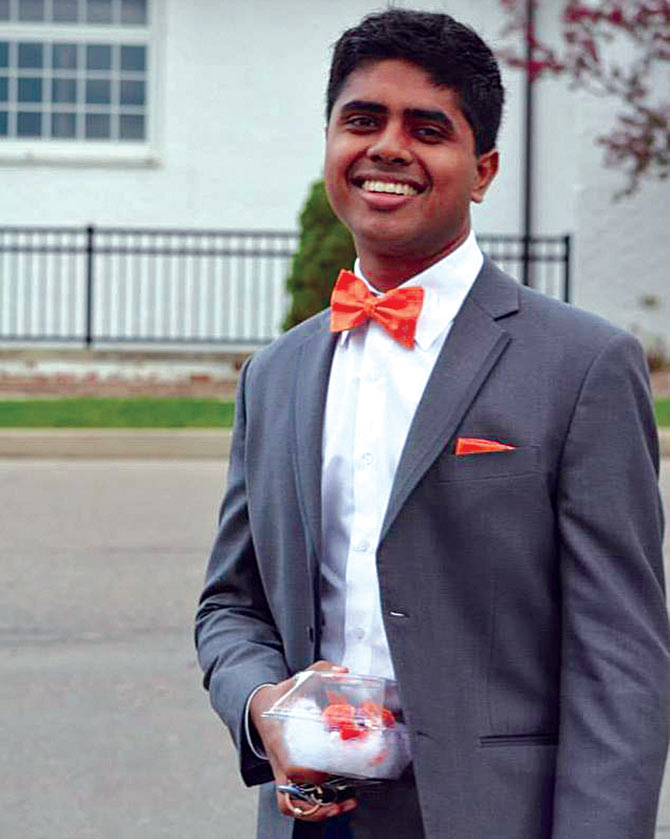 In the eighth part of a series on Presidential Scholars, Arthur J Pais profiles Rohan Sinha has who has founded MoneyOne to help teenagers in and around Detroit and other cities across Michigan learn the importance of financial literacy.

When he looks at a photograph showing him in his early years with his parents Sanjay and Rajani Sinha, Rohan Sinha is reminded of hearing the stories of them arriving in America with just a suitcase and sleeping on the ground of a one-bedroom apartment..

'This picture and their experiences push me to be grateful for my fortunes and remain motivated, because I have a great legacy to uphold,' Rohan wrote in the Presidential Scholarship essay. '...I understand that no matter what adversity I will face, I can seek solace in the fact that my own blood, my own family, has been through and broken through such immense adversity time and time again.'

"As an Indian American, I recognise the power of heritage," Rohan, a student at Bloomfield Hills High School in suburban Detroit, told India Abroad.

"My parents have encouraged me to stay true to my roots.

"From celebrating our festivals to sharing our cultural diversity with our community, I find great value in my Indian experiences.

"My summer trips to India and interactions with my grandparents have made me understand the simplicity that characterised their lives and have instilled in me life lessons in perseverance, courage and family. "

He noted in the essay that without his mother's constant trips with him to libraries, museums, and festivals, and his father's patience in helping him 'attack' mathematical word problems, he would not be the person he is.

From attending summer courses at Northwestern University to explore neuroscience to attending a high school entrepreneurial incubator program at the Massachusetts Institute of Technology, his parents, Rohan wrote, have been 'incredibly supportive of my educational endeavours.'

Rohan will attend the University of Michigan Ross School of Business in fall.

He will major in business, specifically exploring his passion -- the intersection between technology and business

Two years ago, when his family and he became US citizens, it made him reflect on his "great fortune."

Giving back is very important to him.

He has founded MoneyOne to help teenagers in and around Detroit and other cities across Michigan learn the importance of financial literacy.

"As a teenager from the suburbs of Detroit, I understand the pain recession and economic downturn can inflict upon a community," Rohan explained.

"The lack of personal financial knowledge amongst people can lead to unfortunate circumstances such as personal bankruptcy.

"While investigating the main reasons behind all this in Metro Detroit, I came across a very revealing fact.

"Michigan is one of a few states that fail to provide basic financial literacy education in public schools... Through my passion for mentoring, entrepreneurship, and finance, I decided to start this initiative to teach as many teens as I can as well as promote an atmosphere where financial knowledge is stressed.

"Financial discipline and saviness need to be taught in the teenage years, and this is what MoneyOne works to accomplish. I love teaching and interacting with others and hope that my work pays off, because I truly believe in what I am doing."

Like some of the Presidential Scholars Sinha earned the perfect composite score of 36 on the American College Test. Only 781 -- out of more than 1.66 million -- high school students across the country, who took the test to assess readiness for college, notched up that score.

"The key to taking the ACT is to approach the test with eagerness and ambition," Rohan said, "and never as just some long test that you take for three hours on a Saturday."