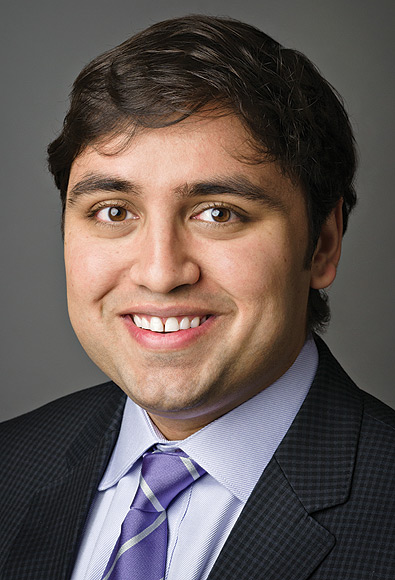 In a three-part series commencing today, Arthur J Pais profiles some of the winners of the Paul and Daisy Soros Fellowships for New Americans.

First up is Amar Bakshi, who fought and won a legal battle to uphold the freedom of the press in Zimbabwe and has studied at Harvard, John Hopkins and now Yale.

Amar Bakshi, a Truman Scholar and now a Soros Fellow, was jailed a few years ago in Zimbabwe on charges of stealing government secrets.

Officials there had become concerned, he said, over his investigation of the lack of freedom in their media. He could have got out of the country by bribing them, but he fought the charges and won his freedom.

Currently a law student at Yale, Bakshi also holds a bachelor's degree from Harvard and a master's in international relations and economics from the Johns Hopkins' School of Advanced International Studies.

He was among 30 candidates recently chosen for the Paul and Daisy Soros Fellowships for New Americans, which supports two years of graduate study in any advanced degree-granting programme in the United States.

The fellowships are open to immigrants or the children of immigrants and were established in 1988 by the Soros couple who migrated to America from Hungary; 1,050 students applied this year.

Each fellowship provides up to $90,000 in support of graduate study over two years in any field at any degree-granting institution in the United States. Selection criteria emphasise sustained accomplishments that show unusual creativity, originality and initiative.

Bakshi is among five people of Indian origin who are among the 2013 New American Fellows -- the others are Vivek Viswanathan, Nishant Batsha, Sejal Hathi and Amrapali Maitra.

After graduating from Harvard, he edited a web site at The Washington Post moderated by David Ignatius and Fareed Zakaria, connecting 75 international journalists in daily discussion, and travelled to a dozen countries for a series of texts and videos documenting How the World Sees America.

Interviewees included farmers, rebels, rappers and imams, a drag queen in Pakistan and the daughter of a Hezbollah leader in Lebanon. The result was "a web of revealing portraits," says Bakshi.

After serving as a special assistant to Susan Rice, the United States ambassador to the United Nations on global health and Muslim outreach, Bakshi returned to journalism as a world producer for CNN and managing editor of CNN.com/GPS.

There he also launched Uncommon Ground, a web-based show placing unlikely pairings of people from around the world in virtual conversation.

"I am always curious and eager to know the narrative of immigrants," says Bakshi, whose parents, both doctors and researchers, migrated from Delhi.

"My parents came here in pursuit of ideals and wanting to shine in a land of opportunities. And they succeeded in doing that. But surely, there are other kinds of immigration stories."

'The news is changing,' he wrote in his Soros essay. 'The biggest stories no longer come from smoke-filled offices. They issue out from every corner of the world. Existing media organisations and new media start-ups must take advantage of this moment and play their role in shaping global conversations, harnessing collective energy and crafting stories that make a Zimbabwean life as vivid as the marital problems of some celebrity. Over my career, I want to ensure such media organisations -- bold, socially conscious and, yes, profitable -- thrive in the post-print world.'

At Yale, he wants to develop a grounding in finance, accounting and management.

'I also want to learn about the major intellectual property issues confronting Web-based content,' he added in the essay, 'and the challenges of fostering free speech abroad.'

'To be a better advocate for the dispossessed, I also intend to further my study of international law. Yale in particular enables me to expand my academic base while pursuing original media ventures.'

He was born American because Brigadier General Amar Bakshi, his grandfather and namesake, had ordered his three children to migrate to the 'land of opportunity' just before dying of a stroke over 40 years ago.

One night Bakshi asked his grandmother to tell him why the well-respected Indian general was so committed to sending his family to America.

'I never thought of America until your grandfather one day said the children must go there,' she told him, he revealed in an essay. 'At first I thought I would miss them very much...I wanted them to stay, but then I thought I was being selfish....And whatever your dada would say, I would do.'

For Brigadier General Bakshi, America fulfilled its promise. His children and their children are all very successful -- 'far above average,' as Bakshi's grandmother boasted. But she felt lonely during her American sojourn and returned to India.

Would she have it any other way, her grandson asked her. 'My loss was much less than their gain,' she said.

"There are so many lively and touching immigrant stories out there," Bakshi says.

"I want to write them or show them on TV. Media has the power to illuminate the most remote corners of this globe. And I intend to harness this spotlight for those in need. When the power of law and policy is blended with the power of media and public attention, great change is possible."