A young girl's inspiring journey from Ambernath to New York 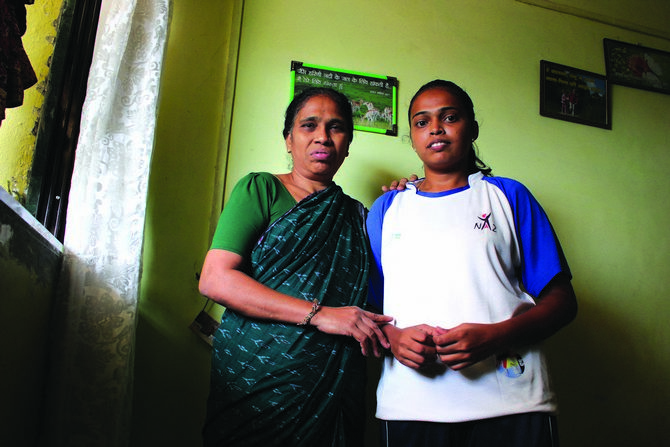 This is the amazing story of a young girl's sojourn from Mumbai's fringes to the glitz and glamour of New York. Abhishek Mande reports.

Pallavi Gaikwad is setting out on the journey of her life.

She is just about 24 hours away from a flight to New York where she will speak at the Clinton Global Initiative, on behalf of the NGO for which she works, making a pitch for partnership with prospective funding agencies and other organisations.

What makes this 26 year old different, from the starry panel at CGI, on which Bill Gates, rocker Bono and Bill Clinton sit, among others, is her story. Set in Ambernath.

The township of Ambernath is a far-flung, lower-middle class place that probably has just one thing in common with the glitzy Mumbai -- the suburban local that connects it to the city's train terminus.

At Ambernath, streets do not exist and water supply is unreliable at best. Dilapidated buildings with forlorn playgrounds pass off for schools and colleges. An occasional expensive SUV, probably belonging to a local politician, drives by, over the non-existent roads making heads turn. Men loiter around aimlessly and women go about their daily chores, heads hung low, trying to ignore prying eyes.

Amidst this picture of hopelessness Pallavi Gaikwad stands tall. Her thumbs are hooked around her backpack strap. She's in her track suit, which makes her stand out even more than she otherwise would have thanks to her height (a little over 5.5). Even so, Pallavi Gaikwad seems at ease. If she's having butterflies in her stomach before her big flight, she's doing a darned good job of hiding it.

In New York at the Clinton Global Initiative, Pallavi will speak on behalf of her NGO. She will narrate her own story and the story of a colleague, not unlike herself, who's fought all odds and stood on her feet.

Pallavi Gaikwad is a product of Goal Program, an initiative Standard Chartered Bank runs in partnership with local and international NGOs, that uses team sports -- in this case netball -- as a vehicle for social inclusion. Its participants are between the ages of 12 and 19 and come from families that earn less than $2 a day.

In India, netball has become the key sport to deliver life skills education and transform the lives of young underprivileged girls.

On completing the program, the girls are invited to then become trainers themselves thus helping scale and replicate the model. They address young women on issues related to health and hygiene, peer pressure and financial literacy among others. They also encourage a dialog on topics that most haven't discussed earlier -- touchy issues such as menstrual cycles, sex and childbirth.

The Naz Foundation, with which Pallavi Gaikwad is associated, runs the program in Delhi, Mumbai and Chennai. 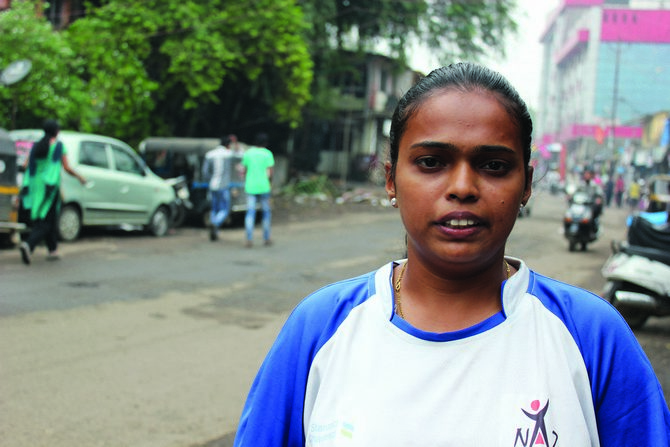 Pallavi happened upon Naz quite by chance. When she appeared for an interview, she didn't have the faintest clue of what she was getting into.

Naz was looking for netball coaches and had approached her through the Thane District Netball Association. She was one of two girls to make it to the final round of interviews.

"My coach told me they were looking for someone to teach netball. Netball is a team game and one that encourages you to work together, whether you like the person around you or not. It works as a good team-building exercise. It didn't seem like a bad way to earn some money and so I went," she says in Marathi, her mother tongue.

By then Pallavi had changed a handful of colleges, failed in school once, forgone a year at college because she didn't like it and was spending most of her time playing sports, while being registered for a distance education graduation course from the University of Mumbai.

"I don't think I enjoyed school a lot. I used to have glasses and because I am tall, my teachers would make me sit in the last row. I barely got attention and I wasn't altogether very happy," she says.

Her mother Chhaya Gaikwad remembers her daughter being an angry child.

"She didn't think twice before hitting someone," says her mother.

Pallavi recalls the time when she aimed a brick at a woman because she had hit her younger brother.

"I got an earful from my father that evening," she remembers.

By now, the Gaikwads had moved into a three-room apartment that was an upgrade from the chawl (tenement housing) they stayed in. This is the house I visited.

The living room is sparsely furnished. The only piece of furniture is a computer table. There are a few musical instruments lined up against one wall. A dozen-odd picture frames with photographs of Jesus and Bible quotations adorn the walls. Chhaya is Catholic. A coat of paint seems overdue. Yet, the room seems like the haven from the chaos outside.

This is the house where Pallavi spent the last ten years of her life. Perhaps not the most ideal environment to raise a child, but it was the best the mother could offer.

Chhaya works in Mumbai's municipal corporation offices and spends about three hours commuting to and from her workplace. At first sight she comes across as a woman who hasn't exactly walked the conventional path.

Understandably Pallavi credits her for her successes. "What I am today is because of my mother," she says. "She never once discouraged me from doing anything -- be it fencing or netball or taking a year off from education, though she was clear that I must get my degree at all costs.

I can see the difference in my life and that of my cousins. I've seen several things that my cousins can't even dream of. Who I am, what I have become is because of my mother's encouragement. She never once doubted us. The freedom she gave was complete and she trusted us to not misuse it..."

"And they never did," Chhaya interjects. 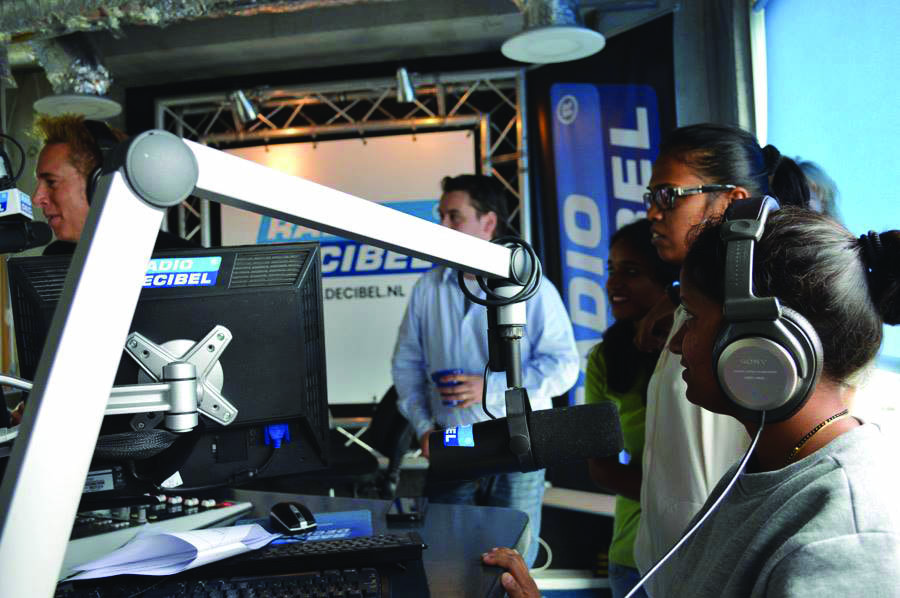 Despite the freedom they enjoyed, the Gaikwad girls led a fairly conventional life. Talks of the menstrual cycle were strictly out of bounds. Sex was never a topic to be discussed and it is to some extent a taboo even today. Chhaya never utters the word and Pallavi's voice drops few decibels when she speaks of it.

So when the young and impressionable Pallavi joined one of her senior colleagues at a life skills session, her eyes almost popped out of her sockets when she heard phrases like periods or menstrual cycle for the first time.

"She (my colleague) had to signal me to not react," Pallavi says, now giggling. "I had never heard such things in my life before! Can you imagine my horror? Here I was thinking that all I had to do was teach girls to play netball but instead I was hearing such scandalous things!"

What began as an unsuspecting netball coaching assignment was slowly turning into a life-changing experience. Just when Pallavi was getting comfortable with the idea of hearing 'blasphemous' things, she was told that she would soon have to start coaching young girls on the same topics.

"I wasn't ready for that," she confesses, "But I realised the importance of talking about one's own body, to be able to make young women aware of issues related to it. So I began talking to them on these topics. Most women are averse to listening to this, let alone talking about it. The challenge is to get them to open up."

Pallavi along with her colleagues mostly conducts sessions in schools around the area where she lives. Here she addresses young women who come from backgrounds similar to hers, but aren't made aware of their potential. She speaks to them about the importance of hygiene, the effects of peer pressure, sex and childbirth. So far, she's trained over 2,000 young women.

"There have been cases when parents have complained to school authorities about what we're teaching but more often than not, when we explain to them the importance, they go satisfied. Some of them even request permission to sit in on some of the sessions to understand it themselves because often they have no idea too!" 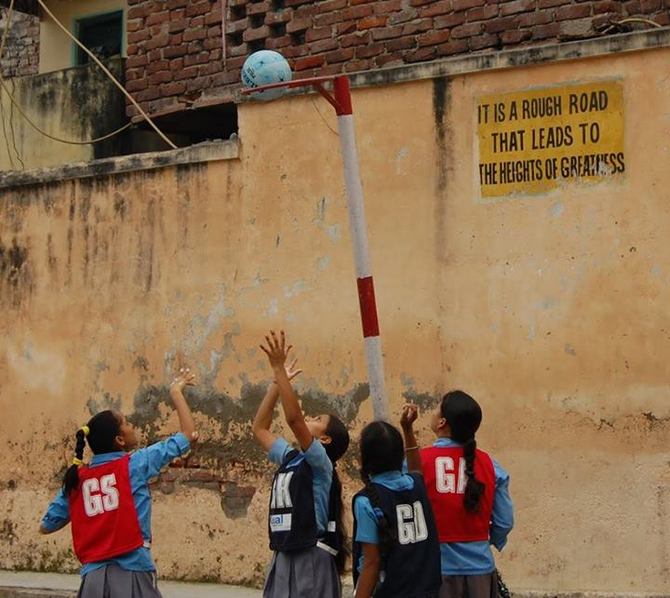 When she isn't teaching in schools and colleges, Pallavi goes to destitute homes whose inhabitants are largely women rescued from brothels.

"They are challenge to deal with," Pallavi says. "For them, all of this is a joke and they often ask us what we'd teach them about sex that they don't already know. It takes a lot to be in control of the situation."

Pallavi recalls an incident when a game of Chinese Whispers turned ugly. "One of the participants changed the message to something so obnoxious my colleague couldn't even say it! We were horrified."

Then there was another time when Pallavi was inches away from being physically harmed as she stood between two young ladies -- one all set to stab the other using a pair of scissors.

"It took some patience and guts to get out of that one," Pallavi says laughing now. "I've dealt with all sorts of people!"

Her job at Naz has also taken her places she'd never have dreamt of going. Pallavi has travelled to Bangladesh to conduct a similar coaching camp for trainers in the country and to Amsterdam where she did a refresher course of sorts to be better equipped to train back at home. But it is her trip to the US that she holds closest to her heart.

"I never expected to be selected," she says. "And now here I am trying to figure out what to wear and how to use a fork and spoon!"

Her overseas trips have made Pallavi realise the disparity between cultures. Yet, like many Indians suddenly exposed to foreign cultures, she isn't overtly enamored by them. If anything her primary aim is 'to let them see our culture and understand it better' than blindly embracing Western traditions.

Even so, she understands the importance of blending in.

The last few weeks have been spent in selecting her wardrobe. "I didn't know what 'trousers' meant and I used to think jeans were considered formal clothing," she says.

Now she has a few sets of Western formal clothes and her wardrobe for the US will be a mix of both western and Indian clothing.

Learning how to use cutlery though is turning out to be a little tricky.

"I've never used a fork all my life. But I realise now it is important to learn and so I am. Perhaps by the time I get to the US, I will have learnt it," she says.

The last few weeks have been packed with excitement. "The (CGI) website has a picture of me and (almost) next to me is a photograph of Bill Gates! Bill Gates who invented this (pointing to the computer)! I've been the topic of discussion even at my sister's workplace (another local NGO)! It is unreal! I cannot believe I am going to be amidst so many people... including Bill Clinton, the President of the United States!"

She admits that it has been unnerving. "But I know that I have to do a good job. This is what I have taught my girls and now it is my turn to be put to test. I better deliver."