She began her career as Ladakh’s first woman guide, but now runs her own, all-women tourist company and won an award recently for rural entrepreneurship.

Thinlas Chorol was a professional trekking guide. But Ladakh’s male-dominated tourism business would not employ her because she was a woman.

She gave them a suitable answer.

In 2009, when she was 27, Thinlas Chorol started her own company, the Ladakhi Women’s Travel Company, an all-woman enterprise. All its 22 employees are women and they work as trekking guides, porters and administrators.

Chorol was awarded the Jankidevi Bajaj Puraskar for Rural Entrepreneurship in 2013 by the Ladies’ Wing of the Indian Merchants’ Chamber.

Thinlas Chorol spoke to Rediff.com about her struggles and motivation, and of course, the best trekking tours and monasteries in Ladakh.

How did you become a trekking guide?

I was born in a village called Takmachik, near Leh. As a child I used to go with my father to stock fodder for our cattle in the mountains. I liked that very much. After tenth standard I was selected to study at Students Educational Cultural Movement, Ladakh, where I met many trekking volunteers and accompanied them on treks.

SEMCOL is an NGO trying to improve the education system in Ladakh. They have residential hostels. I was with them for eight years, training to be a guide. Many tourists come to trek in Ladakh and volunteers from SEMCOL accompany them. I came to know the terrain very well.

In Ladakh, most boys who study in college become tourist guides. After finishing my course at SEMCOL and the Nehru Institute of Mountaineering, when I applied as a guide to two travel agencies, they rejected me because of my gender.

They said, ‘Oh you are a woman and if you go with a group of tourists in the mountains it will not be culturally acceptable’. That got me going.

How challenging was it for you to break the mould?

I was very shy when I started. Then I did mountain training, outdoors touring, back-packing which made me more confident.

It made me think I too can do it. Many people encouraged me to go for it. I wanted to show that women are no less as touring and trekking guides in the mountains of Ladakh.

It took two to three years to convince the naysayers that women too can become professional guides.

'I also want to empower them and make them independent'

Why did you become an entrepreneur?

I started my own company to create opportunities for other women. There are very few female guides in Ladakh. My company has seven women guides. I am the first professional woman guide from Ladakh.

Mine is the first all-women company in Ladakh.

My main objective is to encourage women to become professional tourist guides. I also want to empower them and make them independent.

How did you train your employees? What were the challenges?

Most of our employees come from small villages. We make great efforts to improve their language skills.

The trainees start as porters; the more they mingle with tourists who speak English, the faster they learn the language and improve their skills.

We give them proper training about the flora and fauna, culture, and eco-tourism, things that tourists are curious about.

How did you learn to speak English?

We studied English in school, which helped us to read and write, but not speak the language. I learnt the language better when I worked with SEMCOL and started going out with tourists.

One time I did a big French group and only a couple of them spoke English. It becomes very difficult to communicate in such cases. I got a bit flustered when I tried to explain the importance of a monastery in English and they stared blankly at me!

'I don't fear anybody when I am not in the wrong' 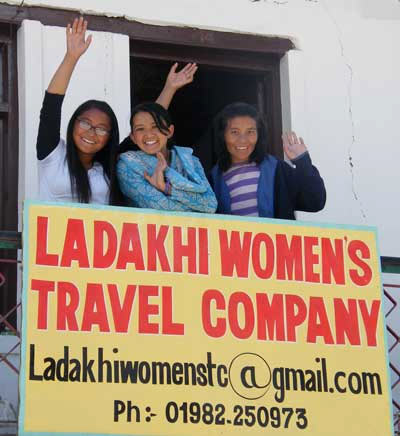 Your first trekking tour… how did you manage?

I had gone as a volunteer with other guides to Markha Valley. It was a 22-day trekking tour, where I also did the cooking and guiding. From Lamayuru, to Padum, to Zanskar, and ending in Lahaul, in Himachal Pradesh.

In another group this horseman tried to tease me, thinking that he could take advantage of a lonely tourist woman guide. He called me out in the middle of the night.

In the morning when all the tourists were also around I warned him that I would burn his tent if he tried to act funny. That scared him no end!

What precautions do you take?

Generally, we threaten mischief-makers and it works. I don’t fear anybody when I am not in the wrong. Mostly, verbal threats work the best.

How do tourists react when you take them for a trek?

They express their happiness and encourage me by saying that they have never seen a woman guide in other parts of India.

Now that we have some seven women guides, tourists realise that women can be equally good. Most tourists are very encouraging. 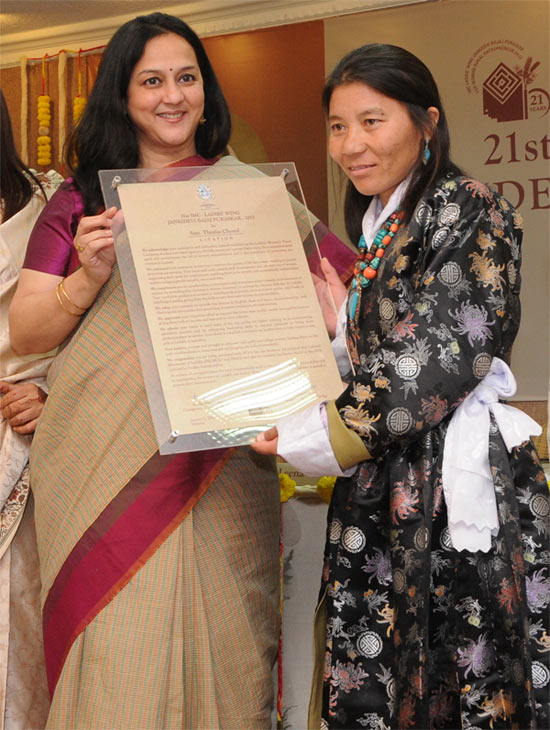 What advice would you give women who want to chart their own path?

Believe in yourself. Keep saying this to yourself: Women also can do anything; they can rise up to any challenge.

Be strong in your beliefs and commitment to what you are pursuing.

Tangtse to Tso Moriri. It is a very difficult trek. Very few people attempt it. Amazing views as you go higher and higher. It takes eight to nine days to do this trek.

Lamayuru to Alchi is also a very scenic trek.

Which are the best monasteries in Ladakh?

Alchi, Hemis, and Chemrey monastery, which was a palace but the king offered it to a monk.

What do you like most about being a Ladakhi?

I like the mountains of Ladakh. The people are very friendly and helpful but now it is changing a bit.

I like Ladakhi food and fruits. In Ladakh everyone has their own fields and I like to work in the farms.

Any favourite destinations in India?

I like Kerala because there are lots of trees there and there is greenery everywhere. And lots of fruits. I was there for a tourism course.