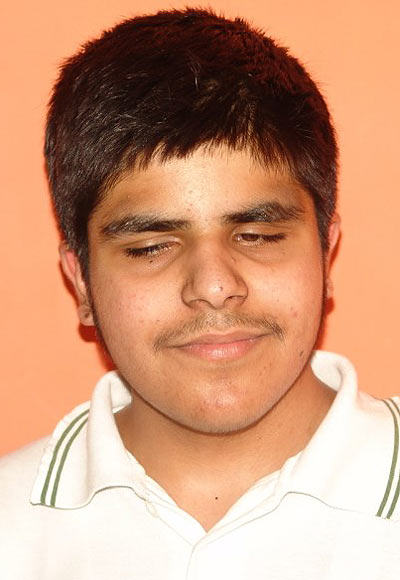 Visually impaired Delhi student Kartik Sawhney has repeatedly been denied permission to appear for the IIT-JEE in the past three years because of his disability. However, in March 2013, he was awarded a fully funded scholarship to pursue engineering at Stanford University in the US. This is his story.

On May 27, 2013, when 18-year-old Kartik Sawhney scored 96 per cent in his Class 12 CBSE examination, he became the country's first ever visually impaired student to have achieved the feat in the science stream.

Appearing from Delhi Public School, RK Puram, he scored 99 in computer science (his favourite subject) and 95 each in English, mathematics, physics and chemistry; his total is 479 out of 500.

Recalling some of the challenges, he says, "Studying with normal students wasn't easy, and neither was choosing a stream of my choice."

Determination and perseverance are the key factors to his success -- he simply would not take no for an answer.

"A lot of people think that disabilities limits you from doing certain things. But I think success comes to those who believe in their strengths," he states.

Sawhney, who comes from a middle class family -- his father Ravinder Sawhney is a businessman and mother Indu Sawhney a homemaker -- confesses that aiming high and making tough decisions at every stage was still easier than executing them.

For three years in a row, he has been denied permission to appear for the IIT-JEE; he was told that there is no provision for blind students to take the competitive exam. But he did not lose hope and applied to universities abroad.

And in March 2013, Sawhney received a fully funded scholarship to pursue a five-year engineering programme at Stanford University. Once armed with this degree, he intends to "improve the condition of visually impaired back in India".

In this interview, the inspiring young man discusses the many challenges he's faced to come this far, what miffs him about the Indian administration and tells us what keeps him going. 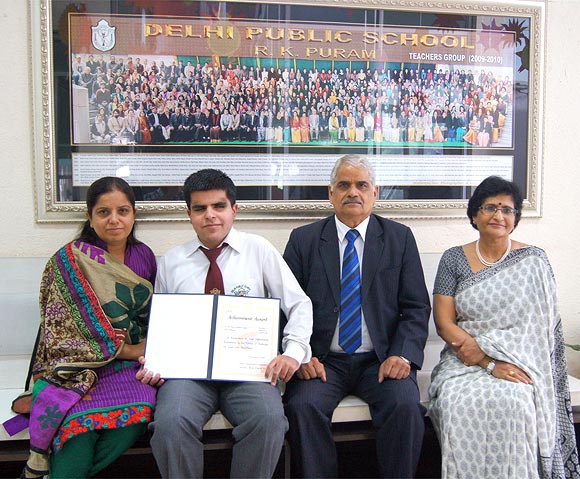 What were the challenges you faced when appearing for the CBSE exam?

Since no other blind student had pursued science in Class 11, I had to write several letters to the Controller of Examinations, CBSE, to make an exception.

There were a lot of issues to be considered if I had to pursue science. For example, e-books for Class 11 and 12 science subjects were not available for blind students.

Along with my school principal Dr D R Saini, I must have written about 20 letters to the CBSE, after which they eventually considered my request.

If there were no e-books, how did you study?

I generally use a screen-reading software called JAWS, which converts text into audio; it basically reads out digital content. Till Class 10, I did not face so much difficulty because the textbooks were available in digital format. Only the classroom notes had to be keyed in separately.

In Class 11, however, I had to seek help from my peers and family members, who would dictate the chapters from the textbook while I typed them into the computer.

The syllabus for Class 11 and 12 was extensive, so I had to type about 100 to 200 pages every day before I could study them.

This whole process ensured that I took longer than other students to prepare, but now when I look back, I can say that it was well worth the effort and hard work.

How did you manage laboratory experiments?

When it comes to empowering visually impaired students, unfortunately India is not as advanced as the West is.

In the US and UK, there is specialised audio-enabled laboratory equipment that reads out both the instructions and inference for you. However, in India, we are yet to subscribe to such technology because it is very expensive. I'm told that a single piece of equipment costs Rs 60,000 and above.

During the laboratory sessions, I could easily read out the instructions from the handbook and report inferences that could be experienced by touch or smell, but I needed help to complete most other experiments.

For example, I could identify a particular chemical by its peculiar smell, but I could not identify the colour of the gas or the chemicals involved in the process. For such experiments I had to depend on someone else.

However, during the practicals exam, I was allowed to take an alternate multiple choice test on the computer

'Sometimes I would not understand what the reader was trying to say, particularly when a question involved symbols' 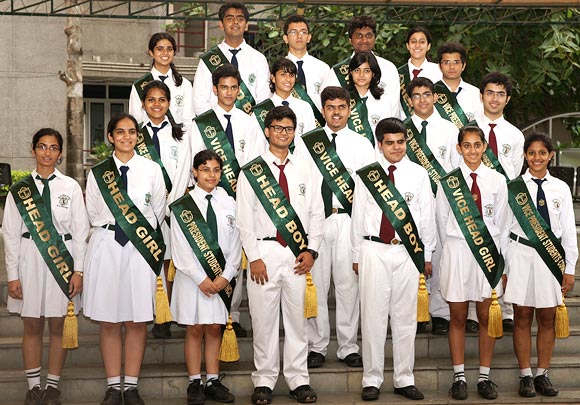 How did you cope studying with other students at Delhi Public School?

Prior to joining DPS, for two years I'd undergone training at the National Association for the Blind. And I was given special permission to use either a computer or a laptop to maintain notes, for which I'm indebted to my school.

But the transition from NAB to DPS wasn't smooth. I continued to be dependent on digital material and since each session would not last beyond 45 minutes, I had to further sharpen my concentration so that I could take maximum notes.

Both my teachers and friends at school were helpful. The teachers were kind enough to repeat themselves and also encouraged me to meet them after class if I had any doubts, but they could only do so much. I had to do the learning on my own, which was frustrating at times, especially because I would not understand simple descriptions.

What about examinations? How was your performance rated?

For theory subjects, I was provided with a soft copy of the question paper, which I'd install on my personal computer.

The screen reading software would read out the questions.

While others attempted them on paper, I had to type the responses on a computer. I was given the same time as the others and when I was done attempting the paper, I had to take a printout and give it to the concerned faculty member for evaluation.

The purpose was to allow me to take the examination independently.

For practical examinations, the multiple-choice computer-based test was sometimes combined with a viva (oral test).

Have you ever faced instances when a reader was not able to communicate to you effectively?

Yes, there have been several! During the Olympiads, if the organising committee did not find me a suitable reader from a science or math background, I'd have to make do with what I got. Sometimes I would not understand what the reader was trying to say, particularly when a question involved symbols.

During the Scholastic Aptitude Test too, I was provided with a Hindi reader who was from a non-science background. When the teacher struggled with the symbol, I had tried requesting the invigilator to provide me with a teacher from a science background or at least allow the reader to cross check the description of the symbol from a science or math teacher, but the invigilator did not oblige.

Without identifying the symbol, I could not proceed further. There I ended up losing precious time.

In the SAT, I scored 760 in Mathematics and 750 in chemistry out of 800 each, which in my opinion was much less compared to what my friends had scored that year. Had I been provided with a reader from science background, I would have probably scored better.

I mentioned this in my application essay to the universities abroad and I believe Stanford must have considered that.

'The IITs not only turned down my request, they were also rude to me' 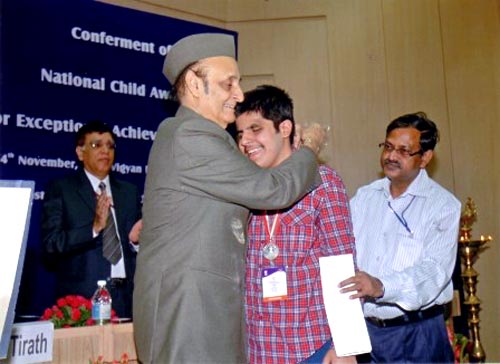 What made you give up on your dream of studying engineering at an IIT?

I had always thought highly of the IITs. I dreamed that if I were to study engineering in India, it had to be from one of the IITs.

However, since I was visually impaired I realised that there was no provision for people like me to appear for the JEE, which is a highly competitive test.

So between 2010 and 2012, I wrote several letters to the IITs in Madras, Kanpur and Delhi, respectively. Each time, they not only turned down my request, but were also rude to me.

Although the IITs have a three per cent reservation for the physically handicapped, it is restricted to students with poor or low vision. Since I am 100 per cent blind, they told me that I am not qualified to take the JEE.

When some NGOs tried to take up my case, a faculty member from one of the IITs told one particular organisation that since the JEE is a highly competitive test, they could not arrange for a reader or a separate form of testing for me. Moreover, they were apprehensive of cheating -- they feared that any reader assisting me may try and help me with the answers too. How absurd is that?

At first I was very disappointed. I thought that if leading Indian institutes like the IITs are not willing to consider my abilities and accommodate me as a student, I will not be able to pursue a higher education.

And after being turned down for three years successively, I realised that there was no point in waiting. Even if they were to allow me to study there eventually, I would have to face even more serious challenges and I wasn't even sure how long I'd have to wait to see that day. It was the lack of options in India that forced me to look abroad.

How do you intend to make use of your international education?

Internationally, Stanford is the best place to pursue engineering. Ever since I understood computers, I have been passionate about computer science engineering.

I have already designed this software called 'STEM made easy', which has two different applications and aims to help blind students like me study subjects like math and science easily.

With the benefit of a Stanford education, I think it's not only possible to shape up my computing skills, but also try and develop applications that will improve the condition of the visually impaired back in India.

I love music, particularly Indian classical music and have been professionally trained in singing for 10 years now. In fact, when I was in Class IX, I was one of 10 talented students selected from across India, who received the rare opportunity to receive training from the late Pandit Ravi Shankar.

I have always admired Dr A P J Abdul Kalam. In 2005, I had the opportunity to interact with him and I must say, he had inspiring words for me about how to perceive life and its challenges.

When Dr Kalam learned of my disability and what I had achieved, he told me: "Son, it is better to have a vision (foresight), than merely have vision (eye sight)." I will always value his words.

What are your greatest learnings?

When I was young and somebody told me that I could not attempt something because I was blind, I'd feel bad.

But over the years, I have realised that nobody is perfect. All of us have weaknesses.

I feel that it is unfair to compare one set of abilities to another, or set restrictions merely on the basis of any deformities. I hope people in power realise that everyone is differently abled and instead of pointing out our flaws, see what can be done to improve the current regulations in a way that can benefit several boys and girls like me.

Do not judge people based on what they lack; instead, focus on what they are capable of and if possible, help them get closer to their goals.

It is okay to get frustrated when things don't work your way. If success came so easy, we would not value it so much. Whenever you find yourself in a difficult situation, try and look at the better and brighter side of things. There is no excuse for not working hard. And if you do, you are destined to taste success sooner or later.