Skiing for a dream 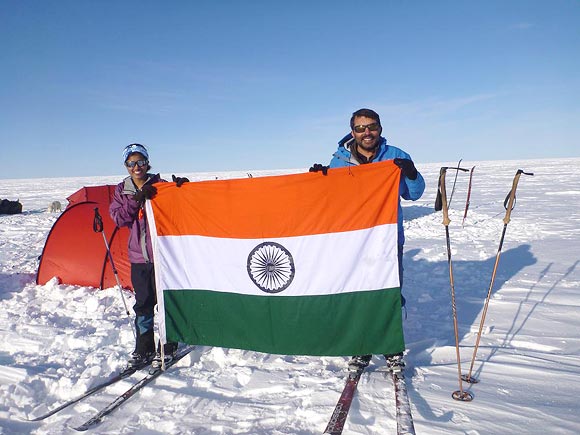 Divya Nair speaks to an Indian teenager who skied across Greenland to raise funds for an institution for leprosy patients' daughters.

On May 13, when Delhi teenager Deeya Suzannah Bajaj, a grade 12 student from the Shri Ram School, set out on a cross-country skiing expedition to Greenland, she didn't have the slightest clue what was in store for her in the days to come.

The challenge was to travel 340 miles in temperatures that went as low as minus 49 degrees Fahrenheit. Not to forget the ice, crazy winds, blizzards and rough climatic conditions that made things worse for the young girl.

And what was Deeya's purpose in undertaking this challenging expedition? To raise funds to build a new wing for Ganga Vatika, a home for the daughters of leprosy patients, in Haridwar, India.

Back home in India, before she embarked on the expedition, she requested friends and family to pledge a certain amount of money for every kilometer she travelled.

May 31, Deeya unfurled the Indian tricolour in Greenland after successfully completing the challenge, the youngest Indian to have made it through the expedition.

Her journey took her from Kangerlussuaq on the west coast of Greenland to Isertoq, an Eskimo village, on the east coast. She was accompanied on the expedition by her father Ajeet Bajaj, the only Indian to have skied at both the North and South Poles.

Deeya was recently awarded the Aspire-TIE Young Achievers Award for her successful completion of the Trans-Greenland Ski Expedition.

In an interview with India Abroad, Deeya speaks about the challenges she faced during the expedition, the relationship she shares with her father and Ganga Vatika in Haridwar. 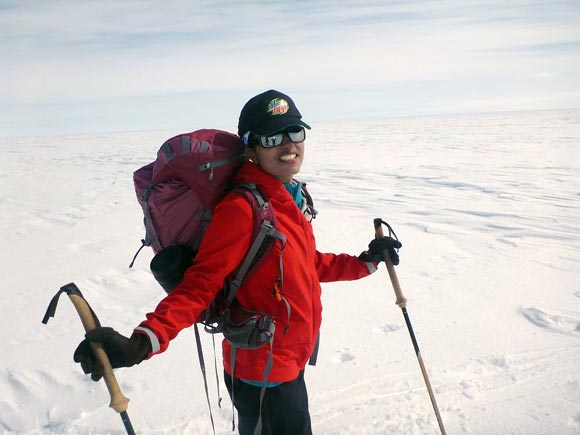 How does it feel being the youngest Indian to have made it to the end?

I was initially very conscious. But others from the expedition made me feel comfortable. When I completed the expedition, I was told I was the youngest to have made it this far.

Could you summarise the 20 days of your journey? What was the experience like?

It was an amazing experience. Twenty days of seeing nothing but snow wasn't as monotonous as I thought it would be!

The landscape was beautiful and the snow would glitter in the sunlight, making it seem so surreal. Though there were times which were really hard, I think that pulling through those moments made me stronger. This expedition also made me realise how far I could extend my limits when I wanted to push them!

There were many, but I have always liked challenging myself. My recent expedition across the Greenland ice cap demanded that I dip into my physical and mental energy reserves time and again.

There were days when the conditions were so tough that I felt like giving up, but I kept pushing myself to go that extra mile, literally.

These kind of extreme expeditions require good teamwork and although the other members in the expedition team were much older than me, I got along very well with all of them.

There were days when their energy levels were low and I would offer to lead the team. The responsibility of guiding my team to our goal with the use of GPS was immense, but satisfying.

These were little things that kept us going. Looking back, there is a sense of achievement which is hard to describe. 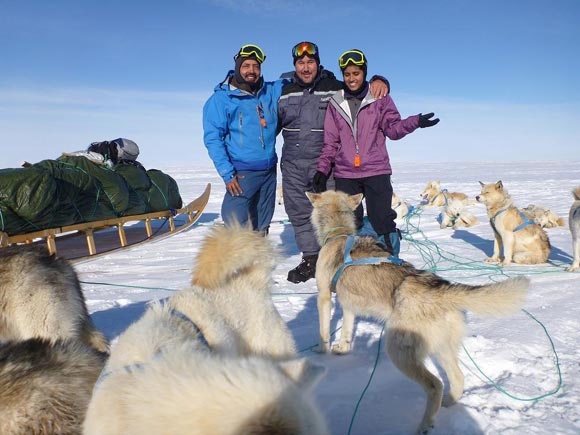 What is the greatest thing you have learnt from your journey so far?

My parents have been supporting an institution in Haridwar for the children of leprosy patients for some time now. These children do not stay with their parents because of the social stigma attached to the disease.

The institution, run by the Divya Prem Sewa Mission, initially catered only to boys. I initiated the idea of starting a girls' wing.

They agreed to use their present infrastructure and initially bring in 12 girls, who were siblings of the resident boys. I think my biggest achievement so far has definitely been this initiative.

I wanted to carry on with this initiative by first raising funds to look after the girls who had joined the home. I wanted to help them construct a separate building for the girls. And that required a lot of money.

Since my father is a member of several adventure camps, he was initially invited to join the Trans-Greenland Ski Expedition. I asked if I could join him. Although he cautioned me about the rigorous journey, I explained why the expedition mattered to me. I wanted to use the expedition to combine my passion for adventure and my dream of supporting a girls' home in Haridwar. That's how he agreed to take me along.

Before I started, I requested family members and friends to pledge certain amounts of money for every kilometer that I skied. I skied 550 kms during the expedition and have managed to collect over Rs 500,000 (about $10,000) so far for the home.

'They are barely six and seven year old kids, but they have experienced so much more than me' 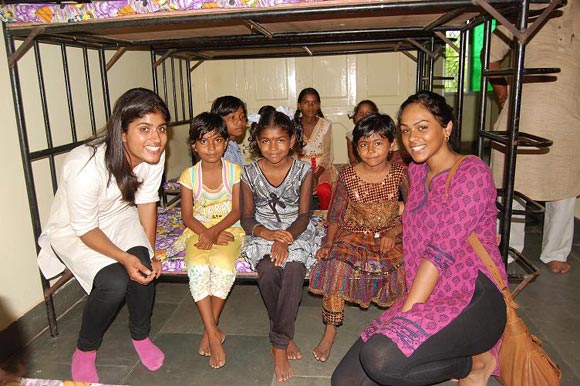 Weren't you conscious of the girls' background while interacting with them?

Frankly speaking, I wasn't. I think that just because a person comes from an underprivileged background doesn't mean I should pity them or feel too conscious of them being different from the rest.

Beyond everything, I respect them. These girls have managed to pull through everything. They are barely six and seven year old, yet they have experienced so much more than me. The fact that they are so happy with whatever little they get makes me more humble and appreciative of the things that I would otherwise take for granted.

Approximately how many children are part of this home?

There are over 200 boys, but I raised money for the girls wing, which has 12 girls so far. 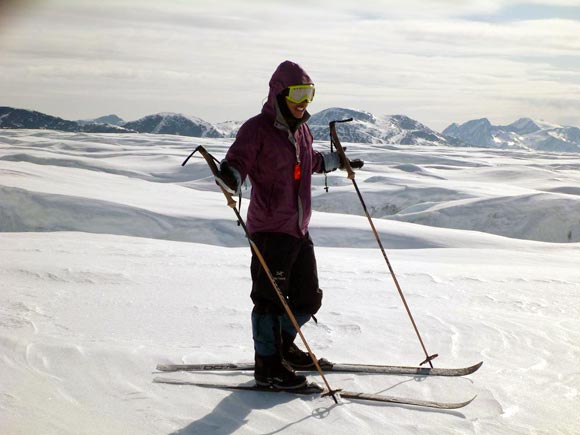 Where did you learn skiing?

I learnt downhill skiing at Auli (Uttarakhand) when I was eight. I have skied in Gulmarg (Jammu and Kashmir) and in Turkey as well. While on the Trans-Greenland Ski Expedition, we were on cross-country skis, which made the experience challenging for me.

Have you always loved adventure sports?

Yes! I guess, it runs in the family. Since my parents operate an adventure tour company, Snow Leopard Adventures, I was exposed to outdoor adventure sports at a very early age. My inspiration for the outdoors is definitely my father, who is the first Indian to have skied at both the North Pole and South Pole. 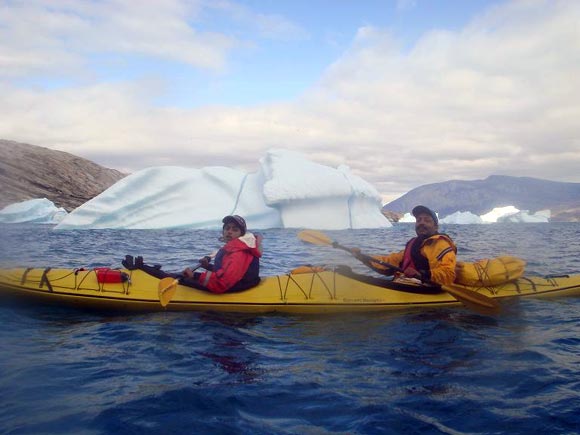 What does your mother have to say about it?

My school, the Shri Ram School was very supportive about my endeavour since the beginning. They also put up a link on our Web site, which followed my expedition and they helped collect funds for my project. My mom has been very supportive throughout, but she tends to worry a lot. She is also aware that my father is very safety-conscious.

What are your career plans and plans?

I would like to join an Ivy League/equivalent school and major in business studies. After gathering experiences and knowledge, I wish to be part of my parents' adventure tourism organisation. I want to add value to their current business and take it to the next level.

'It was hard to imagine what these children had gone through' 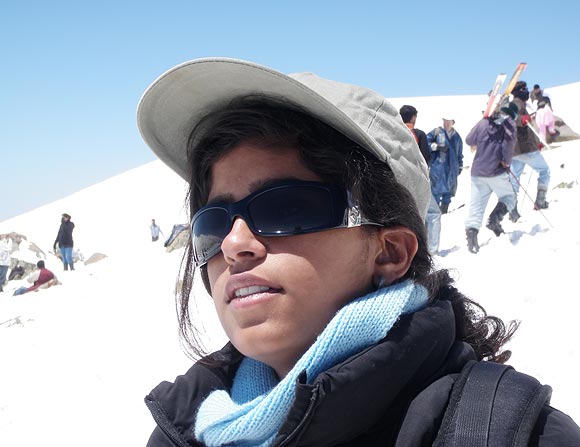 While raising funds for the girls, I realised how much I would be affecting their lives. When I met the kids for the first time a year ago, I fell in love with them instantly.

It was hard to imagine what they had gone through and what else they would have had to go through had they not been given this opportunity.

At the same time, it scares me to think that there are many more girls out there like them in our country. This fear has further instilled in me the desire to work even harder and collect more funds for them, so that I can try and support Ganga Vatika to house more girls.

I would tell other young people that doing something like this, that affects the lives of 12 young girls, gives me a feeling of happiness that can't be expressed.

During my first visit to Ganga Vatika after the girls had joined, we planted saplings together to signify our growing commitment to the cause. While walking out of the garden I held a girl's hand to help her out. For the next few hours that I spent at Ganga Vatika, the girl did not leave my hand! It was a different feeling -- the experience has filled me with indescribable love and empathy for them.