The Harvard grad who's committed to making a difference 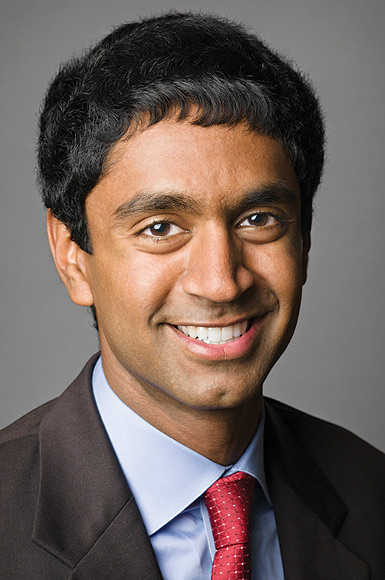 In the third and concluding part of a series on Indian Americans who have won the Paul and Daisy Soros Fellowships this year, Arthur J Pais profiles Vivek Viswanathan. The Harvard alumnus says he wants to use the opportunity to influence others contribute to society.

Part II: An Indian American's quest to reclaim his identity

Vivek Viswanathan's father came to the United States in June 1972, during the turmoil of the Watergate scandal.

"When I asked my dad what he remembered, he shrugged," recalls Vivek.

His father said he was a resident at the time, and had fallen asleep while removing his socks after a 36-hour shift at the hospital.

The more Vivek learned of his story, the more he began to appreciate why his father, in his first years in the United States, did not follow the news from Washington, DC.

Before New York, he had never set foot in a country other than India, and neither had any of his four older brothers. He was 22, had borrowed the airfare money and arrived with just a suitcase, Vivek adds.

'The example that he and my mom, who arrived in the United States in 1980, set for me and my siblings consisted of some elemental lessons: Finding good work to do, doing that work with diligence, and serving others,' Vivek wrote in his Soros Fellowship essay.

'These lessons, rather than a penchant for debating politics at the dinner table, had enabled them to successfully adapt to life in a new country.'

Vivek was fascinated by politics. His parents had emphasised throughout his childhood that he could apply their lessons in any field.

"They did not bat an eye when I left the science research programme in my high school to pursue my interest in historical research," says Vivek, who like his two siblings went to Harvard for his undergraduate studies.

His parents "encouraged my interest in every way, including visits to 12 presidential libraries across the United States."

Vivek, who will use the Soros award to continue pursuing joint degree (JD) and MBA degrees at Stanford, said he aspires 'to make a difference in politics and to one day run for public office.'

'I believe that participation in politics can be frustrating,' he wrote in an essay, but fascinating, an exercise involving difficult trade-offs between short and long-term considerations but one that offers the best way to make a difference for people.'

The influence of his parents is the foundation of his experience as a New American, "animating my activity in college and beyond," he said.

As the programme coordinator, he matched 45 tutors with employees who had similar schedules and language abilities, and organised a monthly dinner and discussion series on immigration policy.

"I also hoped that the programme would develop the ability of employees to become active and engaged citizens after they had passed the exam," he said.

He also organised two voter registration drives at the Harvard Bridge to Learning and Literacy Center.

He recruited student volunteers and contacted nearly 50 Harvard employees who had attained citizenship through his programme, registered many of them for the first time.

Vivek also worked with other programme tutors to create an illustrated guide summarising major historical developments in the United States since the 1950.

He works with the Naturalization Pro Bono Project at Stanford.

"I hope that, in this effort as well as in all of the efforts that I pursue upon graduation," he said, "I can influence others to make a difference in public life in the same way that my parents influenced me."