'I had no money for school fees, but my son is going to IIT' Students from underprivileged families crack the IIT-JEE Advanced thanks to Anand Kumar's Super 30 educational programme. MI Khan speaks with some successful candidates and their parents.

While the intelligent and hard-working youngsters studied for the JEE, their parents were fighting for survival and earning their livelihood by working as labourers, landless farmers, electricians, salesmen, smalltime shopkeepers and magazine vendors. These poor folks never dreamt that their children will become part of prestigious IIT campuses, but thanks to Super 30, a free coaching centre for underprivileged students in Bihar, it was made possible.

Super 30 is an innovative school run by Anand Kumar in Patna since 2002. Each year, Kumar selects 30 meritorious students -- mostly from poor families -- and grooms them for the IITs. The students stay with him; they are provided free food and lodging. And Kumar bears the expenses on his own, with no financial help from anyone.

And the main feature of Super 30 was reflected yet again in this year’s results, announced last Friday -- of Kumar’s 30 wards, 28 cracked the examination and will make it into an IIT.

The mood at Kumar's residence in a congested lane in Patna's Jakhanpur locality, from where he runs Super 30, was overpowering as successful students basked in their newfound glory.

Joy knew no bounds for Bhanu Pratap from Uttar Pradesh. His father Rampyare Pratap is a labourer and the sole breadwinner in the family; they have often had to go without food. Along with Bhanu’s mother Geeta Devi, he was at Kumar's house celebrating their son's achievement. "You have shown us a day we never even dreamt of. We shall always be obliged to you," said Geeta Devi, as her husband nodded.

"I think Anand Sir not only prepared us (for IITs), but also gave us the confidence to excel, even in the face of difficult odds," added Bhanu.

And there are many like Bhanu who were part of the Super 30 this year.

'Here at Super 30 we were all one big family, which I won't forget for life' 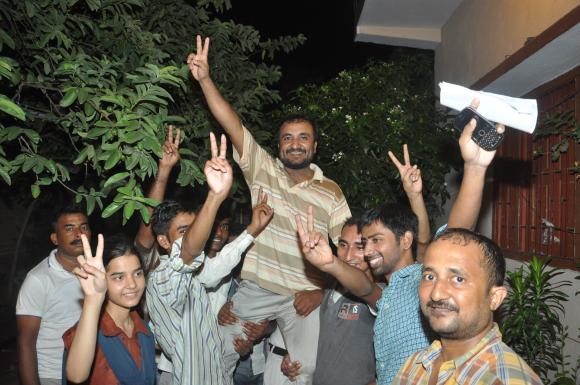 Pranav Kumar from Samastipur district in Bihar is the son a landless farmer. His father Pankaj Kumar works on other people’s farms to earn what can be a highly uncertain income. With financial constraints, Pranav studied in a government school and growing up was tough -- once when he burnt his hand as a child, his family could not even afford proper treatment.

Then there is Ankit Kumar from Bihar's Vaishali district, who lost his father, a lineman in the telephone department, in a road accident last year. At one point it looked like it was all over for Ankit, as his jobless mother could not afford to continue his education, let alone coaching classes. "Somehow I got to know of Super 30 and managed to clear the screening test. Here it was like I found my new father, as Anand Sir and his family looked after me in such a way that I never felt like I was away from home," he said.

Abhishek Kumar's father Ghanshyam is a mechanic. He used to sell refills and ink for pens, but his business suffered when disposables became popular. Now his son wants to become an electrical engineer. Abhishek was quite popular at Super 30 too, as he could quickly repair fans or electric connections, something he learnt from his father. "Here at Super 30 we were all one big family, which I won’t forget for life. In today's materialistic world, who houses 30 students free of cost and helps them become eligible for an institution like the IIT?" he questions.

Shivangi Gupta, daughter of a magazine vendor from Deha, a small village around 50 km from Kanpur, UP, has also seen acute hardships in childhood. To continue with her education was a problem, as her father Viresh Chandra Gupta struggled to make both ends meet. "I was provided all the help I needed staying with Anand Sir's mother, and I finally fulfilled my dream," she said. 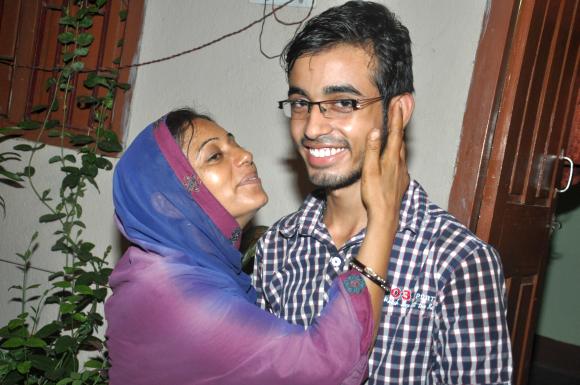 The tears in the eyes of Yasmeen and Farhad Shafi said it all. Their son Hanjala cracked the JEE and they were showering blessings on Anand Kumar. "May Allah give you everything in life for helping poor folks like us. I did not even have enough money for school fees, and today my son Hanjala is set to go to IIT," said Yasmeen.

The parents present at Kumar’s house, many of whom were not schooled themselves due to absolute poverty, were understandably overwhelmed with the success of their children.

The atmosphere was quite sentimental -- students were touching Kumar's feet as he distributed sweets to them, while their parents were showering blessings on the inspirational teacher and his family members.

Sanjeev Mallik from Mahubani district in Bihar was on cloud nine after the success of his son Santosh Kumar. "I am now worried how he will study at the IIT, as I don't even have the money to buy him a new set of clothes or a book. But then when God has brought him this far, he will take care of his future also. I am a private jeep driver and hardly know what IIT is. It is all because of Anand Sir," he said.

A proud Afsar Nath Mishra, a Sanskrit teacher and priest from Banka, held the hand of his daughter Preeti Kumari while conveying the happy news to his wife back home. "She will now be an engineer. She will be our support when we get old. God sent us to Super 30," he said, thanking Kumar and his mother with folded hands. "I don't know how she studied and what she studied. I could not even afford to buy her a dress."

Like Shivangi Gupta, Preeti, who wants to become an IAS officer, also stayed with Kumar’s mother. "To me, she is like a daughter. She will do wonders in life," said Mrs Kumar.

For his part, Kumar told rediff.com that the hard work of his wards has paid off and Super 30 has once again proved that talent requires nothing but the right encouragement and opportunity to blossom.

"Nobody looked at each other as a Brahmin, or a Muslim, or a scheduled caste or an outsider. Super 30 united them all for a common cause, which they championed and achieved together," he said.