He wants to heal the world 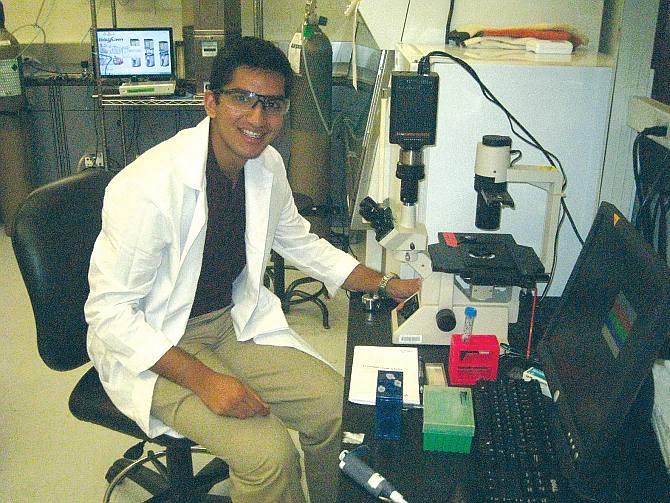 In the fifth part of a series on Presidential Scholars, Arthur J Pais profiles Rajet Vatsa (Read part one, two and three and four here, here, here and here respectively).

Rajet Vatsa, who has spent a lot of his spare time in helping disadvantaged children in America and raising funds for a school in a remote Nicaragua village, chose Harvard College not only because of high academic standard but also the commitment to social justice.

"The modest beginnings in India of my grandparents and parents have inspired my desire to serve others and make a positive impact on the lives of those around me," said Rajet, who attends the Brophy College Preparatory in Phoenix, Arizona.

"I recall one trip from New Delhi to Rajasthan when I was an ecstatic five year-old sitting next to my parents on the Royal Fairy Queen (luxury train). Unscheduled, the conductor stopped the train to make repairs to the engine, upon which attendants flooded the cabins and began closing the windows. My father and I joined the other curious passengers who were struggling to the outside deck. Seconds later, we walked out into another world. Children clothed in mud-stained rags huddled around the train, begging passengers for food, money, anything. My eyes darted to straw huts and fixated on the young kids my own age who were desperately attempting to sell water."

As he grew older, the images coming back to him, he said, and he began to see poverty and inequality also in America.

"And I began to realise and appreciate organisations which are offering quality education to impoverished children," Rajet said. "And I want to be part of such efforts, offering education that empowers young people."

His family background and spiritual upbringing, he said, opened his eyes to the grave mistake of romanticising poverty: Of whitewashing suffering with notions of the 'simplicity and quaintness of those in the developing world,' he wrote in the Presidential Scholarship essay. 'These experiences have ultimately shaped my understanding of my calling to live a life of virtue, courage, and wisdom and have helped me redefine service as not simply giving to others, but rather living for and with others.'

At Harvard, he will be studying medicine, computer science and global health policy.

Among the books that have influenced him most is Mountains Beyond Mountains.

"It is the true amazing story of Dr Paul Farmer from Boston who works with the poorest in Haiti running a clinic and a hospital," Rajet said. "His work has taken him to some of the poorest parts of Africa. He is the kind of person I want to follow."

The awards and fellowship he wins, Rajet said, will nudge him towards his goal of being a doctor who will make a difference in the world around him.

He is a recipient of the Rickover Medal -- "Rickoid of the Year" -- at the 30th annual Research Science Institute; awarded to the student 'who best exemplifies the balance between individual scholarship and community participation.'

Last year, Rajet served as president of Brophy's buildOn club. He along with other students, including a chapter from the University of Oregon, raised $30,000 to construct a school building in Nicaragua and then travelled there to build it.

"Some people might wonder why we had to go to Nicaragua, spending about $10,000 of the money we had raised, and why (we) did not hire more local people to build the school," Rajet said. "But going to Nicaragua was life education. It was also about human relationships and getting our life priorities. Unlike me who had seen acute poverty firsthand when I was 5, my schoolmates were seeing it for first time in this Nicaraguan village which had no running water and electricity."

His inspiration for establishing Brophy buildOn emerged from frequent trips with his family to rural India, he said. He believes access to education is a key solution to poverty.
"Education," he said, "has the ability to empower individuals. Education has the ability to change lives."

Besides managing Brophy buildOn, Rajet is a leader of various academic and leadership groups at Brophy such as the League of Academic Contests, Big Brothers, which helps students from lower income groups find self esteem and improve in their studies. He is a member of the Brophy wind ensemble and the Brophy varsity tennis team. He won first place in the Knowledge Masters Open Tournament, an international academic competition. As a member of the Brophy League of Academic Contests, he took part in the first ever National History Bowl Competition in Washington, DC. A few months ago, he also became an Arizona State Championship tennis player.