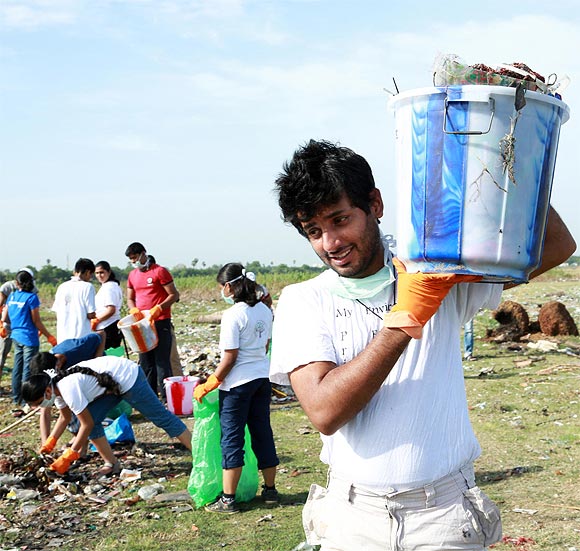 Arun Krishnanmurthy, a social entrepreneur who has only one purpose in his life: to save the environment, animals, wild life and lakes.

When people are conquering jungles, indiscriminately felling trees, irresponsibly mining earth's resources, here is a 26 year old who has dedicated his life to save the environment and wild animals.

Meet Arun Krishnanmurthy, a social entrepreneur who has only one purpose in his life: to save the environment, animals, wild life and lakes. The NGO, Environment Foundation of India (EFI), which he has built along with hundreds of school children is committed to just one thing: saving the environment.

Growing up in a village

Several factors in his childhood contributed to Arun getting attached to animals and nature. The first was growing up in a village on the outskirts of Chennai. Then, having his school education in the pristine surroundings of Good Earth, a school run by the J Krishnamurthy Foundation which taught him how to live in harmony with nature.

The many lakes, ponds and wandering animals he grew up seeing as a child started vanishing as the city started swallowing the surrounding villages. Slowly, the villages started losing their lakes and ponds to huge concrete structures.

It also saddened Arun when high-speed buses that raced through his village mercilessly knocked down cows, dogs and cats on the roads.

The images of the dry lakes, concrete structures in place of ponds and the mutilated bodies of animals made him take a vow in his mind that he would dedicate his life for preserving the environment and animals.

His father also was a huge inspiration, providing him the opportunity to chase his dreams. 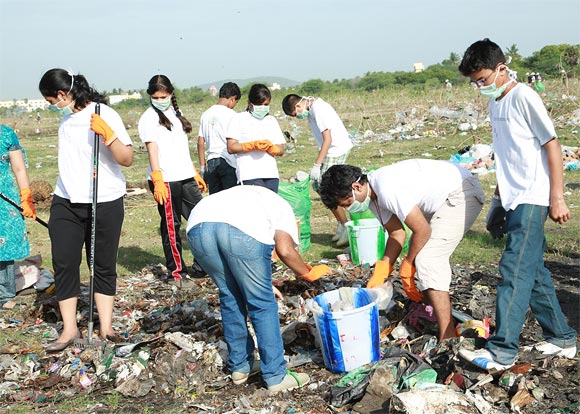 Studying at the Madras Christian College

From the serene beauty of school, he moved to the Madras Christian College to study Microbiology. Anybody who has seen the campus of MCC knows how inspiring it can be to nature lovers. Though Arun was part of many groups of volunteers that worked to preserve environment, nothing gave him full satisfaction.

Working for Google in Hyderabad

All that changed once he moved to Hyderabad. Getting to work with Google when he was not even 20 was a major breakthrough in his life, Arun confesses. The three and a half years in Hyderabad turned out to be some of the most satisfying years of his life.

His work in cleaning and saving lakes started there. “Hyderabad is a beautiful city and it pained me to see the bad condition of the Gurunadham lake there. I approached the government, and the authorities gave me all the support.”

He then went to schools and conducted orientation programmes on environment and in the end, he would ask them to join him in volunteering to work for the environment. So far, he has done 142 such programmes in various schools all over India. “That was when I realised, it is not only me but very many youngsters who are equally interested in taking care of nature. It is just that somebody has to drive the cause.”

He along with 100 students started cleaning the Gurunadham lake in Hyderabad, and after 6 to 7 hours of hard work, there came out 12 tonnes of garbage. “What we did encouraged me to continue with what I believed in. I didn't look at it as an achievement.”

All through, Google was very appreciative of what Arun did for the environment, and even after he left Google and Hyderabad, his association with the organisation continues. Google today is a partner in cleaning lakes.

On why he chose to clean lakes as a major initiative, Arun says, “A lake is not just another water body. When we restore a lake, we are saving many other life forms, and that is the sole reason why we are cleaning lakes. Ultimately, my goal is to save animals, especially wild animals.”

That was why he and his young friends volunteered to go to zoos to keep the environment clean and make the lives of the animals there peaceful.

It was tough moving away from Hyderabad but he had to. “I would say, the city gave me an identity. I was financially independent for the first time, and it gave me an opportunity to do something for the environment.” 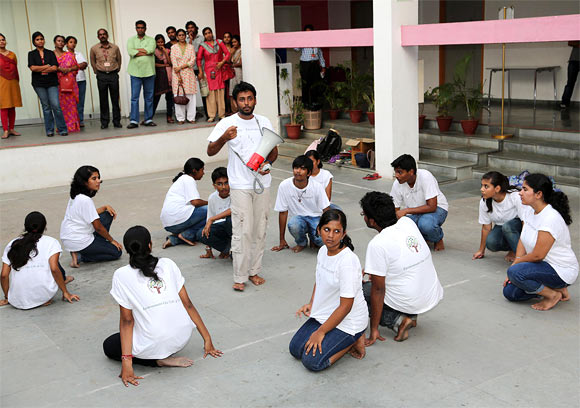 Moving to Delhi from Hyderabad

Even when Arun quit Google and moved to Delhi to study at the Jawaharlal Nehru University, he continued his work of gathering school students and cleaning lakes. In Delhi, he and his young team started by cleaning the Trilokpuri Sanjay Jheel.

“It is true that lakes get dirty again but then, through our work, we are creating awareness among the people in the nearby areas of the lake. There are many who listen to us and there are many more who don't care about lakes,” said Arun.

Earlier, his team used to only clean the lakes. Now they have started fencing the lakes and also, planting trees around the water body so that birds come and nest and live on the lakes.

Becoming an activist and an entrepreneur

Back in Chennai after his studies in Delhi, he decided to plunge deep into environmental work and not do any other job. To make his organisation professional, he registered it as Environmental Foundation of India (EFI).

Now, how to fund EFI, a completely volunteer driven organisation? In 2011, he started his own enterprise -- Krish Info media -- with just Rs 40,000 and bought a laptop and an internet connection. His enterprise develops web based, text based and image based content and business development plans.

He has six freelancers working for him and the company has a turnover of Rs 3 to 4 lakh a month. “We believe that the cause is the hero and not those who work. We share the platform with every other life form, and just because we can talk louder and can walk erect, we can't call ourselves the supreme species. We genuinely want to give back our time, manpower and volunteering efforts. We want result oriented service.”

He also found that more than adults, school children were dedicated, and ready to give their time and devote labour for a cause. It is only because of their interest that EFI continues to support many causes, Arun admitted.

In Chennai, EFI has 47 core members and 212 volunteers. Other than Chennai, EFI has teams in Hyderabad, Delhi, Lucknow, Vizag, Bangalore, Coimbatore, Ahmedabad and Pondicherry, and membership of about 1,000-1,300.

As Arun was a Climate Champion of the British Council, he uses that platform to educate and sensitise students. Now, both the British Council and American Consulates in Chennai, Hyderabad and Delhi are good knowledge partners of EFI. 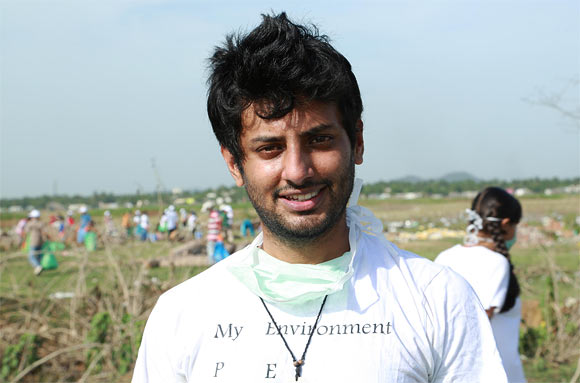 With the intention to run EFI professionally, he wants to recruit people at a later date. EFI now plans to do real time conservation projects for corporates who want to do CSR (Corporate Social Responsibility) activities. “Most of the corporates do not know what to do as their CSR work. They make T-shirts, caps, etc and waste a lot of money. We now tell the corporates to invest in our projects and we will run the project for them. This is the model we plan to build for the future.”

Today, the team cleans lakes, beaches, zoos, plants trees, educates people through street plays and also makes environment-friendly paper bags. But his ultimate aim is to preserve wildlife. By 2016, EFI plans to have animal homes also in Hyderabad, Chennai, Coimbatore and Pondicherry, and 20 lakes to be restored in the cities where they work. They also want to reach out to India’s neighbours like Bhutan, Nepal, etc and do real life conservation activities there.

Arun confesses, “we have set very high goals and we think they are achievable.” When he says “we”, he includes all the school kids who have been with him for the last few years. Those who joined hands with Arun as 7th standard students are still with him even after 4 to 5 years, and he plans to recruit them as volunteers of EFI once they pass out of college. “We want to stay together forever doing our work.”

“I have big dreams and I have nobody to guide me. I am just following my dreams with all these schoolboys, and I am sure, one day, we will be there. We want to establish Environment Foundation of India as an organisation that does real conservation work. I want to die with the satisfaction of having saved animals, and these animals should live because we help them live. I know I am destined to do this job...” his voice was full of hope and optimism.

As we were speaking, he received a text message on his mobile that one of EFI's projects had been approved by the J&K government to educate the state officials on wild life conservation.

It was also time for the EFI 'family' to get ready to clean the 18th lake the next day!