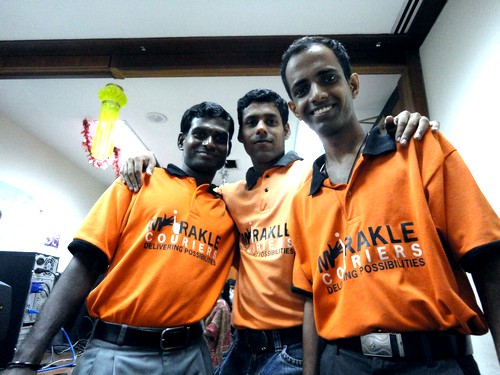 Two years ago Dhruv Lakra started out Mirakle Couriers that is almost exclusively run by people with hearing disabilities. This is the success story of the 32-year-old entrepreneur and his company.

A few days before the country celebrated Eid, Mumbai-based entrepreneur Dhruv Lakra found himself with a rather unique problem on his hands. A Muslim gentleman who'd heard of his courier service wanted them to deliver over 3,000 Eid cards across the city.

Lakra and his team of over 50-odd people were far from ready for this. It was a challenge that few courier companies of that size could've been able to meet. Delivering so many shipments in less than two days was out of the question.

With Mirakle the challenge gets more complex -- all its delivery boys and each of its back office staff is deaf.

Sitting across the table from me, Dhruv Lakra speaks softly and in short sentences. He doesn't like to deviate from the question he's asked and seems like a man of few words.

For now though, Lakra is getting a little fidgety. He's promised me this meeting but his heart and mind are back at the office where everyone is trying to sort out the 3,000 cards that need to be delivered ASAP.

It's a little more complicated as one of the two days they have to deliver is a Sunday, the one day that the staff looks forward to. Lakra knows it will be a tough job trying to explain them the importance of making this work.

So when he returns to the office about 29 minutes later, he will have rolled up his sleeves and along with his staff would be sorting out the cards.

Surely, money is a factor why everyone is working at Mirakle Couriers.

Yet somewhere I'd like to think it isn't so much for the cash that Lakra and his men would be delivering the huge consignment that's just landed on their hands.

For the people at Mirakle it is an occasion they must rise to.

Over two years they've worked hard to build a reputation of being professional and efficient. Certainly, a measly order of 3,000 cards isn't going to ruin that. 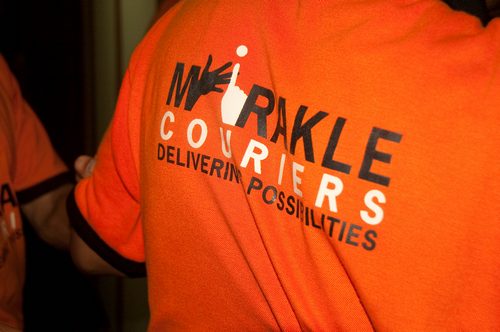 The story of Mirakle Couriers isn't just inspiring but also fascinating -- how the seeds of a simple idea have borne fruits.

Today the company boasts of some prominent corporate houses -- including Mahindra and Mahindra, Godrej, Aditya Birla Group, Vodafone, Infomedia18 JSW, The Business India group and Tehelka among others -- as clients. But while it looks all hunky-dory from the outside it has taken two long years of hard work, patience and persistence to make it happen.

It all began in a local bus a few years ago when Lakra, having returned with an MBA from Oxford and still unsure about his future plans, happened to find a seat next to a young boy.

Much later into the journey, Lakra discovered the boy couldn't hear. They 'spoke' using a piece of paper and a pen exchanging notes. The boy, Lakra recollects, was unemployed.

While this got the then 20-something Lakra thinking about job prospects for the deaf it also struck him that the deaf are perhaps the most invisible among the differently abled people.

In a separate instance when he took a courier delivery without exchanging a single word with the delivery boy Dhruv Lakra hit upon the idea.

"Most people don't talk to courier boys. All we do is take the packet and sign the sheet," he points out adding that not being able to communicate isn't always an impediment in a courier boy's job.

If at all, this has worked to their advantage. While making a pitch to a prospective client, the folks at Mirakle use the social card.

"We tell them if you cannot employ a disabled person, outsource one of your functions to us because we employ disabled people," Lakra says.

Sometimes the pitch works; at other times it doesn't.

Even if they do sell them the idea, there are some who have their apprehensions.

"There's the concern of safety and delivery of the shipments. Some of our clients worry about their shipments getting lost. Convincing them sometimes is difficult."

That's when the big corporate houses Mirakle works with come handy. "It helps to work with big names. When people realise that we work with Mahindra and Godrej, it adds to our credibility. (Also) we're not an NGO. We are offering them a service." 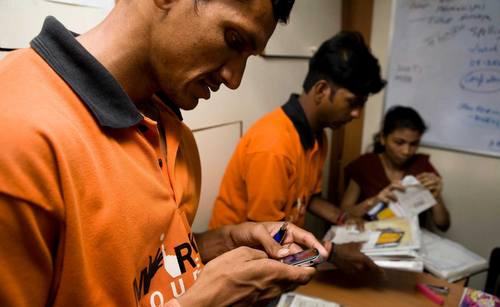 Like most social entrepreneurs, Dhruv Lakra is quick to point to me that his organisation isn't an NGO and is run by the rules of business like any other.

When I ask him if he is disdainful towards NGOs he is quick to point out that he was part of one before starting out Mirakle.

"I think for our kind of business, a for-profit model works better. The thing is disability is closely linked with charity and we need to get that notion out. People also don't always take NGOs seriously and since we are a client service division it helps to be a privately run company than an NGO. Moreover as an NGO you cannot become a vendor."

It has been a difficult ride for Lakra but one that he's enjoyed nonetheless.

When he started out in 2009 with one delivery boy, he worked out of a friend's house and delivered letters himself. Then as business grew thanks to the generosity of Anu Aga of Thermax he managed to get a working space enough for six to seven people.

Today Lakra doesn't necessarily go out to deliver letters and rather focuses on managing his team.

In an interview to Rashmi Bansal in her book I have a Dream, Lakra mentions that to be able to enter the world of the deaf isn't easy.

So, over the years he's even learnt to speak sign language, which helps him bond with them better.

It also helps him communicate with new recruits, most of who come from extremely poor background, have little or no education and are very, very low on self confidence.

"I knew what I was getting into was difficult but you cannot imagine their mental map," he says, his voice betraying signs of exasperation.

"The people who come to me are in their early 20s; they can't hear; some of them are barely fourth grade dropouts and have never once held a proper job. It's very difficult (to reach out to them)."

While the boys do the delivery, the back end operations are handled by the women, all of them in their 20s.

Managing an assorted team of this kind has its challenges. Lakra tells me they meet every once a week to discuss what problems the team faces and they try to overcome it. At the same time they also make sure they don't have such meetings too often.

"Initially there was a lot of handholding but now we're learning to let go because we realise they tend to get over-dependant on us. Earlier if a delivery boy said he couldn't go to an area because he wasn't familiar with it, we'd make an exception. Today we don't. At some level we've come to realise that it is after all their life and they can choose to make a difference," Lakra says. 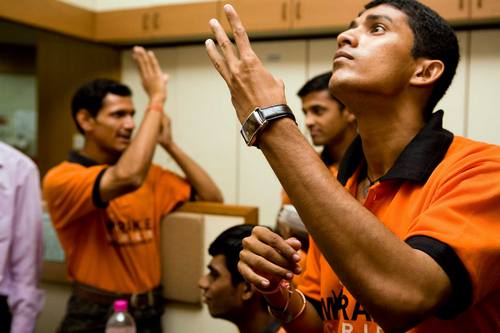 Dhruv Lakra had a choice too. He could've been an investment banker, could've not returned from the UK after his education and could've gone for the conventional route.

Having finished his schooling in Jammu, Lakra came to Mumbai because his parents wanted him to experience the big city life. Here, he spent his college years and soon after, like most of his classmates, joined a private financial services firm.

Two years into his job, Lakra realised he wasn't cut out for it. The job went out of the window and the young fellow decided he wanted to contribute to a social cause.

"I joined Dasra (an NGO) and soon after I joined them I was sent out to Nagapattinam and Cuddalore (in Tamil Nadu). I spent almost four months working in the tsunami-affected villages," he recollects.

After working for over two years with Dasra, Lakra bagged a full scholarship to Oxford for an MBA degree in social entrepreneurship.

On returning to India, Lakra was certain he wanted to start out something on his own but had no clue till the incident in the bus happened.

In his blog, Lakra recollects the story and remembers how difficult life was for the deaf and how 'something as straightforward as a bus became a struggle'.

He writes, "It is an invisible disability. You cannot know when someone near you is deaf as there are no obvious physical attributes, and so it's totally ignored.

It is also a silent (voiceless) disability. There is very little public sympathy for the deaf, and by connection, a severe lack of government support for them in India.

Particularly when it comes to employment there are no opportunities because no one has the patience or the foresight to learn deaf language and culture. This is how Mirakle Couriers was born."

While the initial support of friends and family did help him stay afloat, it was the prestigious Echoing Green fellowship in 2009 that really gave Mirakle the thrust it always needed.

The fellowship amount of about $60,000 aims to 'accelerate social change' by investing in and supporting 'outstanding emerging social entrepreneurs to launch new organisations that deliver bold, high-impact solutions'.

Over two years, the fellowship amount that is released in instalments has largely helped Mirakle grow.

Today the company has two offices -- one in South Mumbai and the other in the western suburb of Andheri and is a thriving business.

Dhruv Lakra's family that has gone through a seesaw of emotions wondering where their son would land up is now not just satisfied but also quite proud of what he does.

Mirakle Couriers has since won the Hellen Keller award for being the 'Role model supporter of increased employment opportunities for disabled people' and won the 2010 National Award for the Empowerment of People With Disabilities.

Yet sitting across the table from me, three days before Eid, Dhruv Lakra is a restless man. There's an urgent delivery of over 3,000 invitation cards that needs to be completed over the weekend.

Exactly 29 minutes into the conversation, Dhruv Lakra excuses himself and leaves. He returns to his office and joins his army of silent women and men as they work through the latest challenge thrown at them.