WhyQ: Meet the teens who set up a business

'Sure, we are teenagers who are doing this part time, but we feel we are making some sort of an impact.'

These entrepreneurs are nowhere near the unicorn club yet.

Problem-solving gives them a high, coding is at the centre of their universe, they have gone through the exercise of investor pitch many times and have faced rejection.

They are co-founders of a technology-led business that started as an idea to mitigate risk during COVID-19.

What sets them apart is that there's no app driving their business, and that they are not eligible to cast vote or hang out in a pub drinking yet.

The founding group had four other teenagers at the time of starting up last year.

They left soon after, finding it tough to juggle studies and business.

Is there a garage in their startup story too like in the case of most celebrated Silicon Valley names?

The company CEO Relan, the youngest of them all at 15, laughs.

"No there was no garage. We met at an IIT Delhi lecture hall where some 100 kids had gathered for an entrepreneurship competition in October 2019."

The New Delhi-based founders have met face-to-face only three to four times, finding their bonhomie on Zoom and Skype.

When asked how it feels to be a boss, Relan, preparing for his Class 10 exams and a recent participant at TEDx, says in a CEO-like manner that the work is divided and that there's no boss.

"The co-founders are busy with their pre-boards," Relan announces while sharing time slots for Zoom interviews for this report.

Tejas Mehta, COO, is in Class 11 and doesn't have the board exam stress.

Mehta, known as the 'jugadu' of the team, joins a Zoom conversation to say, "I am really interested in strategy, business and startups."

He lists commitment to studies as a challenge. Getting the right technology is another challenge.

For instance, the WhyQ business model is based 100 per cent on WhatsApp.

But buying a WhatsApp business API account could take long, he recounts.

The decision to go with WhatsApp was based on a random survey with elderly family members of the founders -- they were asked if they would find it easier to transact on an app or a messaging platform like WhatsApp. 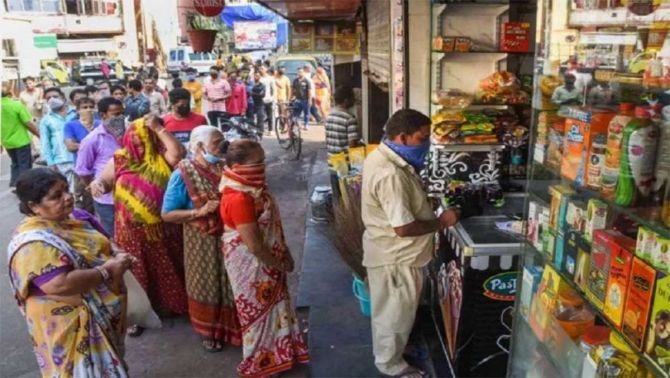 Sara Kothari, who is in Class 10, is the finance and analytical brain of the start-up.

As CFO, she is busy doing the math on funding and investments.

Funding has primarily come from friends and family, though the group is keeping fingers crossed for an angel investor.

"So far, most investors have shown us the door," says Relan, who was exposed to coding as early as when he was in Class 1 and 2, and then he got in it from Class 6 onwards.

He may have been influenced by his computer engineer dad.

For now, the co-founders are not taking home any salary, though there have been students on the rolls when the platform was being developed.

With some few hundred users already trying the platform and a few dozen kiranas onboard, the number of orders on a typical day could be upwards of 100.

Jasraaj Puri, the senior most co-founder and CTO of the company, is a hardcore coder.

Puri talks of making an impact like a seasoned top executive.

"Sure, we are teenagers who are doing this part time, but we feel we are making some sort of an impact."

This is how the WhyQ tech works

Now with the number of Covid cases declining, Relan and team may look at other start-up ideas.

On their wish list are tie-ups with Reliance Jio, Zomato, Swiggy, Dunzo and more.