What are uterine fibroids? 10 warning signs

If ignored, it could also lead to permanent kidney damage and other complications, says Dr Santosh Patil. 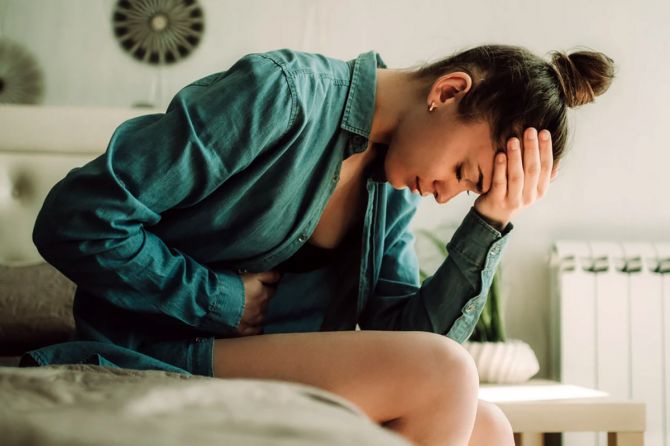 Kindly note the image has been posted only for representational purposes. Photograph: Kind courtesy Pixabay.com

Fibroids are benign (non-cancerous) tumors that can grow in the uterus. They are comprised of dense, fibrous tissue which is fed by blood vessels.

Fibroids are frequent occurrences and are the most common benign tumours in women.

Doctors estimate that fibroids are seen in almost 70 per cent women by the age of 50 years and become clinically relevant in about 25 to 30 per cent of all women aged between 30 and 50 years.

Women can develop one or multiple fibroids that can grow into the uterine cavity, on the uterine wall, and just under the outside of the uterus.

Typically, women who have uterine fibroids have more than one fibroid and they can vary in size. Some are no bigger than a pea while others can grow to the size of a watermelon.

If you notice any of the following signs, please visit a doctor to determine if fibroids could be the cause.

The most common fibroid symptoms include heavier than normal menstruation.

The typical woman with a fibroid uterus may have major flow during her menses for more than four or five days and go through excessive numbers of tampons or pads.

While fibroids can grow anywhere in the uterus, those that grow closer to the uterine cavity are believed to cause heavier menstruation.

The uterine cavity is lined with tissue which is shed every month for a normal menstrual period.

When the fibroid grows either right next to it or indents the cavity, it likely increases the amount of tissue that is shed.

Bleeding between periods could be caused by the presence of fibroids.

As some of the fibroids do get closer to the endometrial cavity or sometimes develop within the cavity, they can be associated not only with heavy bleeding with periods, but even bleeding between periods.

Women with large fibroids may feel heaviness or pressure in their lower abdomen or pelvis.

Often this is described as a vague discomfort rather than a sharp pain. Sometimes, the enlarged uterus makes it difficult to lie face down, bend over or exercise without discomfort.

A less common symptom is acute, severe pain. This occurs when a fibroid goes through a process called degeneration.

Usually, the pain is localised to a specific spot and improves on its own within two to four weeks. However, chronic pelvic pain can also occur.

This type of pain is usually mild but persistent and confined to a specific area.

5. Discomfort or pain during sexual intercourse

The pain may occur only in specific positions or during certain times of the menstrual cycle.

Discomfort during intercourse is a significant issue.

Rarely, fibroids press against the muscles and nerves of the lower back and cause back pain.

A large fibroid on the back surface of the uterus is more likely to cause back pain than a small fibroid within the uterine wall.

Because back pain is so common, it is important to look for other causes of the pain before attributing it to fibroids

If the fibroid is pressing against the bladder it can cause an increased frequency in urination.

Women who find they get up in the middle of the night to urinate, frequently urinate only small amounts, or have difficulty initiating urination could have fibroids.

Fibroids can also add pressure to the ureters, the tubes that carry urine from the bladder to the kidneys, causing urine to backup in the kidney (hydronephrosis).

If the blockage of urine flow is not relieved promptly, permanent kidney damage can result.

Women who have fibroids can experience constipation or bloating as well. Sometimes, fibroids can lead to the development of a hemorrhoid.

Difficulty getting pregnant could be one of the fibroid symptoms to pay attention to, especially if the fibroid is located in the endometrium (the inside lining of the uterus), where the baby grows.

Fibroids that grow inside the uterine cavity can lead to miscarriages and lower rates of conceiving.

Anemia, a deficiency of red blood cells can occur in women that have fibroids due to the amount of blood lost during their menstruation.

In a significant number of patients the amount of bleeding would be so much that it would cause anemia. Anemia can cause fatigue, headaches and light-headedness.

The treatment of uterine fibroids depends on fibroid symptoms. Those who are asymptomatic might not need treatment at all whereas those with mild symptoms can be treated with medications.

Traditionally surgical methods of hysterectomy or myomectomy are offered for the treatment of the fibroids. However, many women with fibroids do not get themselves treated due to apprehensions about undergoing a surgery and its associated complications.

Over the past few years, novel non-surgical method of treatment called as Uterine Fibroid Embolization (UFE) has become widely popular.

In this method, the blood supply to the fibroids is selectively blocked, due to which fibroid shrink over a period of time and symptoms are resolved.

This method is almost as effective as surgical methods of treatment. Besides UFE is lower risk, allows women to keep her uterus, and involves a shorter, less painful recovery than hysterectomy.