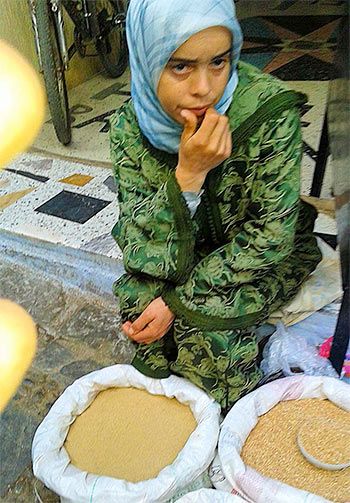 Payal Mohanka travelled to Morocco, that magical place where the past and the present don't jostle but coexist rather beautifully.

Time and space seem to flow seamlessly as I soak in the bird's-eye view of the medina or the old city in Fes.

A virtual concrete jungle as the traditional Moroccan homes (or riads), huddle close to each other.

The ancient city's 1,200-year-old existence makes for a striking landscape. 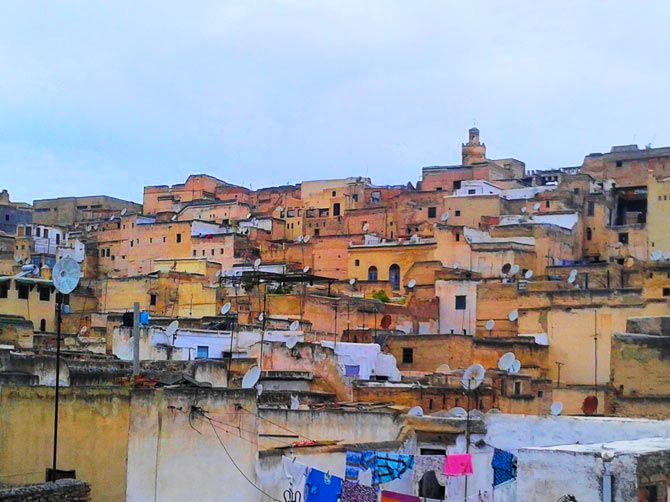 Its medieval texture is dotted with satellite dishes, a stark reminder of our contemporary reality.

Caroline, the proprietor of our guest house, serves us breakfast on the terrace -- a delectable fusion of Arabic and Mediterranean fare.

Two years ago, she purchased one of the decrepit homes and converted it into a guesthouse.

She made Maroc, as the French refer to Morocco, her second home. This country had always fascinated her.

Fes is the second largest city of Morocco with a population of 1.1 million and it has two medinas.

The Fes el-Bali is the largest medieval city in the world with its incredible maze of almost 10,000 winding pencil-thin lanes.

Caroline loved Morocco's proximity to France and the fact that its culture was so different from her own gave Morocco an exotic appeal.

What made her feel totally at home was the fact that after Arabic, it is French that is the most popular language in this north-western African country.

Morocco was a French Protectorate for 44 years.

By the end of 1955, Sultan Mohammed V, the grandfather of the present king, negotiated the gradual restoration of Moroccan independence within a framework of French-Moroccan inter-dependence.

Morocco was transformed into a constitutional monarchy with a democratic form of government.

Simultaneously, the abolition of the Spanish protectorate and the recognition of Moroccan independence by Spain were negotiated.

Morocco, however, retained the impact of these countries.

Today, Morocco is a unique blend of Berber (its original natives), Arabian and European cultural influences.

Morocco's history is reflected in its food as well.

The last several years have seen foreigners buying riads in the medina, renovating them and converting them into guesthouses which are attracting hordes of tourists.

These foreigners comprising French, English, Australians and even Americans own 20 per cent of the almost 200 such guesthouses in the medina.

Residents of Fes gladly swap their dilapidated homes for a modern apartment in Fes' ville nouvelle or new city.

A UNESCO world heritage city, Fes was founded in the 9th century and it reached its height of glory in the 13th and 14 century when it replaced Marrakesh as the capital of the kingdom.

While the political capital was transferred to Rabat in 1912, the old monuments we see in the medina, the magnificent madrasas and mosques have ensured that Fes is regarded as Morocco's spiritual and cultural capital.

Our guide for the day, Abdullah, greets us with a cheerful Subha Ba-Khair, Morning of Goodness, he translates.

"It was in Fes that the Islamic sun rose in Morocco," he points out as he takes us through a soulful journey --- the magnificent Bou Inania Madrasa and the mosque of Moulay Idriss II, who brought Islam from the Middle-East to Morocco in the 9th century.

This city also has the proud distinction of being home to the oldest university in the world, the University of Al-Karaouine, which was founded in 859.

As we proceed on our walking tour, we leave the 9th century behind.

Abdullah informs us that the bustling bazaar where we are standing dates back to the 14th century.

We look suitably impressed as he points to a minaret in the distance and says, "When we reach that mosque we will be in the 17th century."

We savour every step of our walk back in time.

The four stately Gates of Fes with their distinctive Moroccan tiles conjure images of another time, another place.

A colourful collage of congested, chaotic narrow lanes bursting with women dressed in colourful kaftans and scarves covering their heads and men in the djellaba -- a loose-fitting unisex robe, merchants and craftsmen sell a wide range of goods such as olives, dates, figs, spices, oils, rugs and carpets, we wind our way through narrow alleys soaking in the smells and sounds of Fes.

In the midst of the clutter, mules laden with goods maneuver their way up a slightly steep alley while their owner chats on his mobile phone. 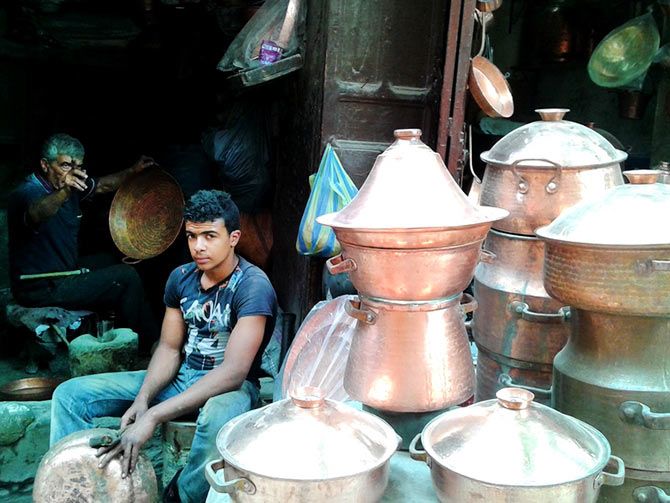 As we turn the corner, we are greeted by the rhythmic pounding of copper beaters while a stack of copper urns are displayed on the side.

The 1,000-year-old Chouara Tannery is one of Fes's oldest tanneries and its terrace offers stunning views of the city. 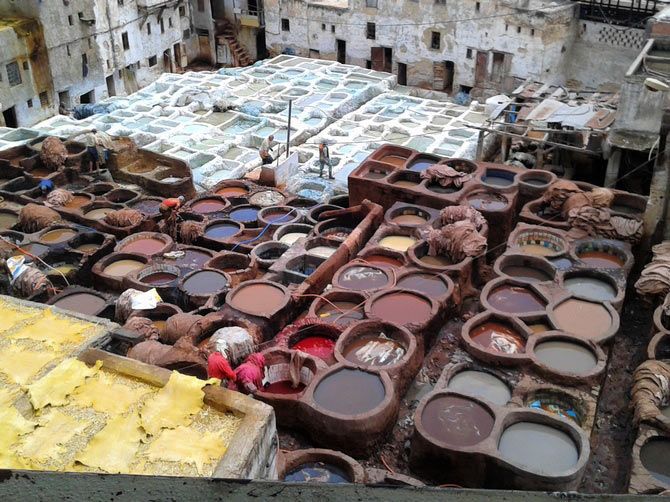 What makes it unique is its refusal to turn to modern machinery. Even to this day, work here is done manually.

Enormous stone vessels are filled with several dyes and liquids.

The hides of cows, sheep, goats and camels are processed and transformed into premium leather products. 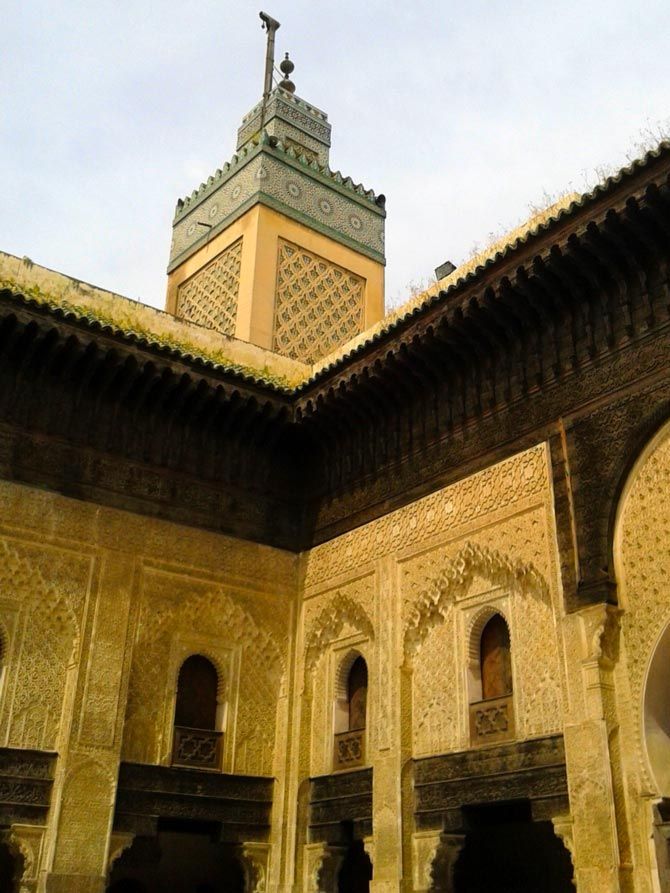 Located in the western part of the country on the Atlantic Ocean, with its French and Arabic style of architecture Casablanca is Morocco's chief port and economic capital.

Our sightseeing begins with the imposing King Hassan II mosque, the largest in the country and among the top three in the world in terms of size. 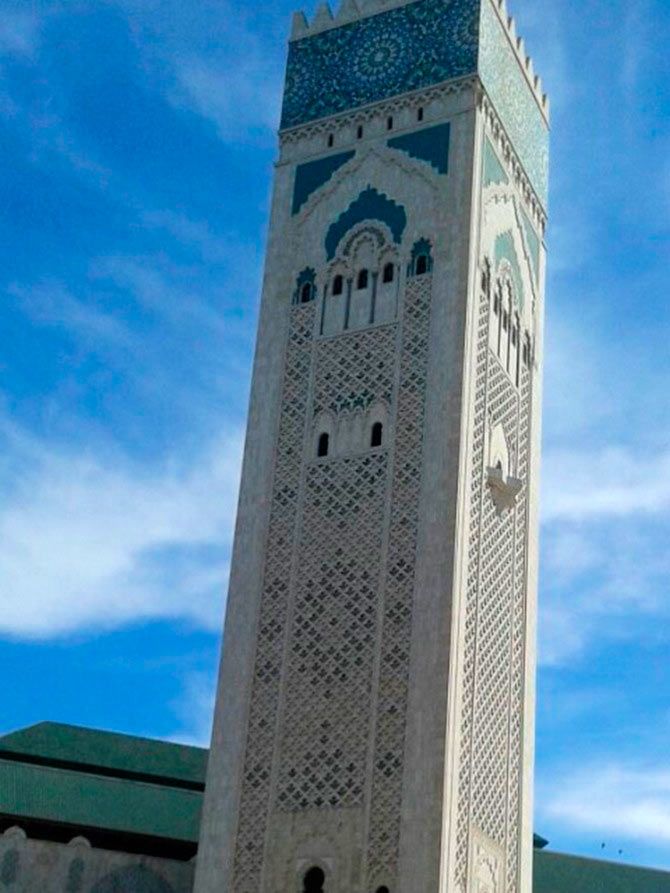 Designed by French architect Michel Pinseau, it has the world's tallest minaret.

On the west side of the Mosque is Casablanca's famed Corniche dotted with hotels, night clubs, cafes where residents and tourists relax with a cup of coffee as they gaze at the ocean.

A truly charming port city is Tangier in northern Morocco.

The 20 mile-wide Strait of Gibraltar separates it from Spain. 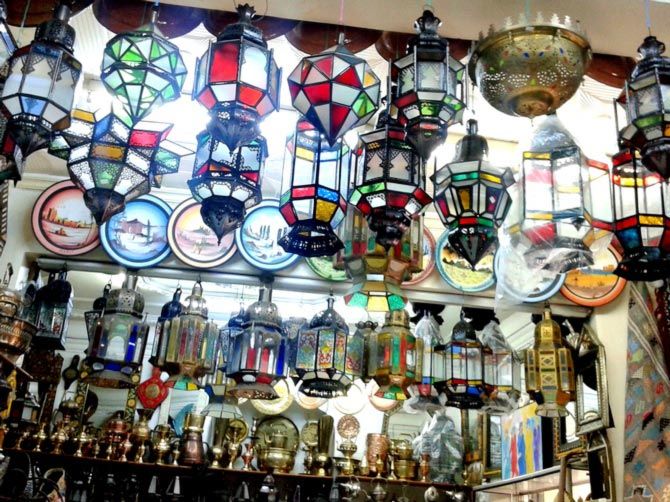 Its medina with its criss-cross maze of narrow alleys and its sprawling souk-selling traditional ceramics, jewellery, filigree bronze Moroccan lanterns as well as the metal and glass ones.

From Tangier, we take a bus tour to Chefchaouen. 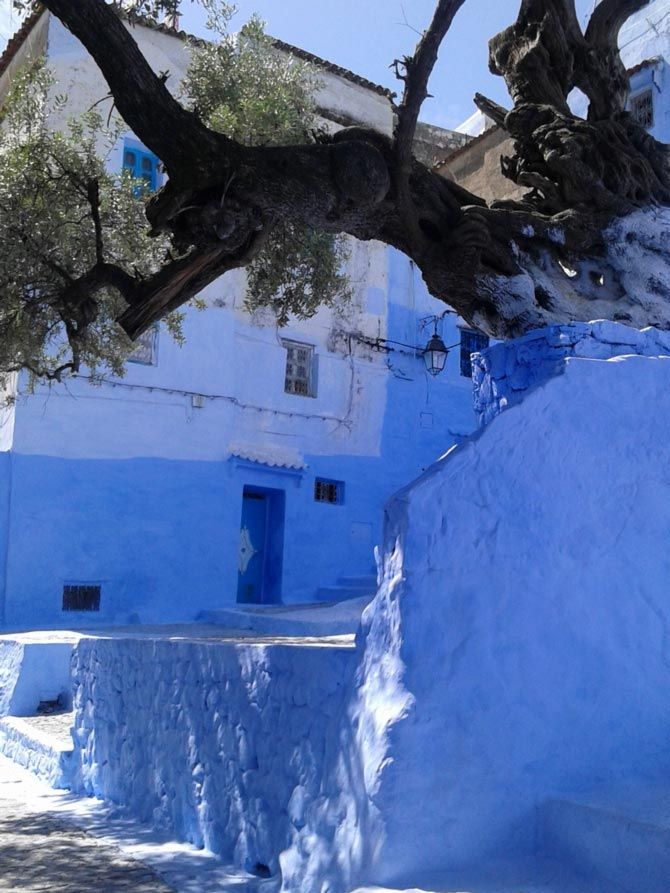 Situated in the Rif Mountains just inland from Tangier, the walls and buildings of this mountain village are painted in shades of blue.

As we walk through the village, we come across a community oven.

A 13-year-old boy comes rushing with his tray of ready-for-the-oven cookies.

The baker puts it into the oven, while the boy waits eagerly for the finished product.

Our guide tells us that women do the preparations at home but the final baking is done in the community oven.

The baker is usually paid in kind... a few of the freshly baked cookies or some of the bread he has baked: an endearing image of rural life.

The high point of the bus tour is the stop at Cape Spartel.

This is the north-western point of mainland Africa. 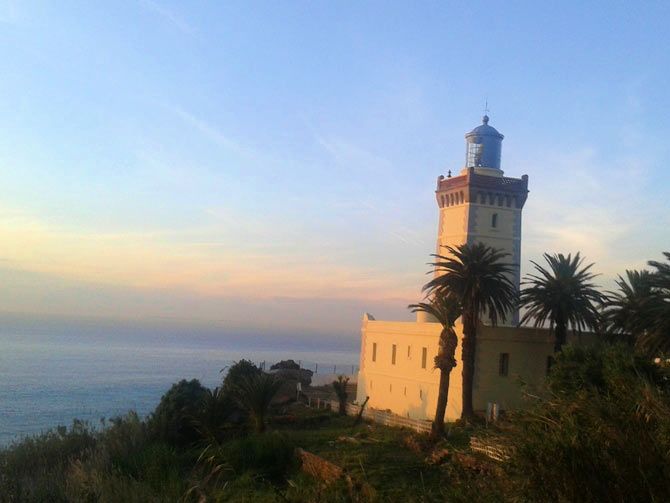 We are greeted by a magical sunset with the lighthouse keeping silent vigil.

This is the point where the Atlantic Ocean and the Mediterranean Sea merge.

It is here that Europe and Africa are separated by the Strait of Gibraltar.

The older people will talk about Raj Kapoor, Shammi Kapoor, Shashi Kapoor and Dilip Kumar; the younger ones are fans of Amitabh Bachchan and Shah Rukh Khan.

As we browse through a colourful collection of ceramics, the owner makes a brave effort to converse in stilted English.

The moment he learns we are from India, he bursts into the Hindi song picturised on Raj Kapoor about half a century ago.

The lyrics make me smile.

Here we are awed by the union of the Atlantic Ocean and the Mediterranean Sea, while this warm elderly Moroccan gentleman is singing about the meeting of the hearts.

Morocco wraps you in its affectionate embrace.