Cairo is a feast for all the senses IMAGE: The sun rises behind a mosque in Cairo, Egypt.
Peppered with Pharaonic sites, soaring minarets, Coptic churches, mosques and mausoleums, history jostles with modernity at every corner of this stunning, teeming city of 20 million people.
Photograph: Ed Giles/Getty Images

Cairo, Egypt's sprawling capital, is a maelstrom of sights, sounds and smells.

Peppered with Pharaonic sites, soaring minarets, Coptic churches, mosques and mausoleums, history jostles with modernity at every corner of this stunning, teeming city of 20 million people.

Dive right in for an immersive experience.

Men in galabiyas (traditional robes) play backgammon and suck shishas (hookahs) outside cafes with pipes stuck in their mouths like oxygen tubes. IMAGE: The iconic Tahrir Square is the pivot around which all of Cairo seems to flow.
Photograph: Wikimedia Commons

"As the cultural and artistic hub of the Middle East, Cairo is known as 'Umm al-Dunya' or mother of the world," our guide Abdel Kawy tells us as we amble across the Kasr el-Nil Bridge towards the storied Tahrir Square, stopping for a moment to take in the view.

The iconic square is the pivot around which all of Cairo seems to flow.

Laid out in the 1860s, around the same time as the Suez Canal, it is a mammoth traffic circle named after Egypt's liberation from the British in 1919.

"Tahrir means 'liberation' and the square has been at the heart of Cairo for more than a century," Kawy elaborates as the televised images of the people's uprising of 2013 held at the venue inevitably flood my mind. 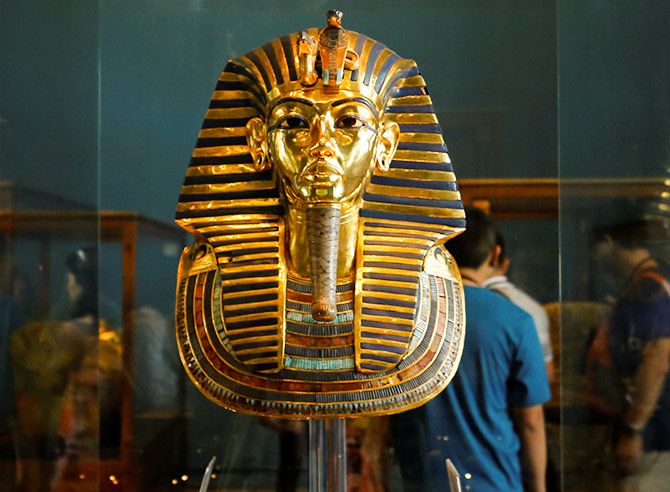 IMAGE: The Egyptian Museum showcases the world's largest collection of pharaonic artefacts, including the treasures of Tutankhamun, one of Egypt's most intriguing monarchs.
Photograph: Amr Abdallah Dalsh/Reuters

For an engaging glimpse into Cairo's past, look no further than its stellar museums.

The honey-hued Egyptian Museum, off Tahrir Square, is a century-old sandstone building showcasing the world's largest collection of pharaonic artefacts, including the treasures of Tutankhamun, one of Egypt's most intriguing monarchs.

The story of Tutankhamun, or King Tut, is a mesmerising one and Kawy narrates it with relish.

"The boy was just nine when he was crowned king, essentially the most powerful human being in the world. Then he disappears when he's an adolescent, and no one has yet been able to crack the mystery of how he died," Kawy says as we move from one artefact-filled high-vaulted room to the other, dazed by the cornucopia of antiquities, treasure chests, jewellery, masks, statues, mummies and sarcophagi.

The inescapable sense of being transported thousands of years back to the age of great pharaohs is surreal.

The Royal Mummy Room, featuring blackened and shrivelled mummies laid out in casks, is eerily spectacular. After spending a few minutes here, I find myself unable to take any more of the ghostly exhibits displayed in muted lighting, and make a swift exit.

If the Egyptian Museum is the big daddy of all of museums, Cairo's constellation of smaller museums -- the Museum of Islamic Art, the Agricultural Museum and the Coptic Museum (which showcases Egyptian Christian artefacts) -- are no less important, offering as they do a remarkable insight into the diverse historical sources of a 5,000-year-old civilisation. 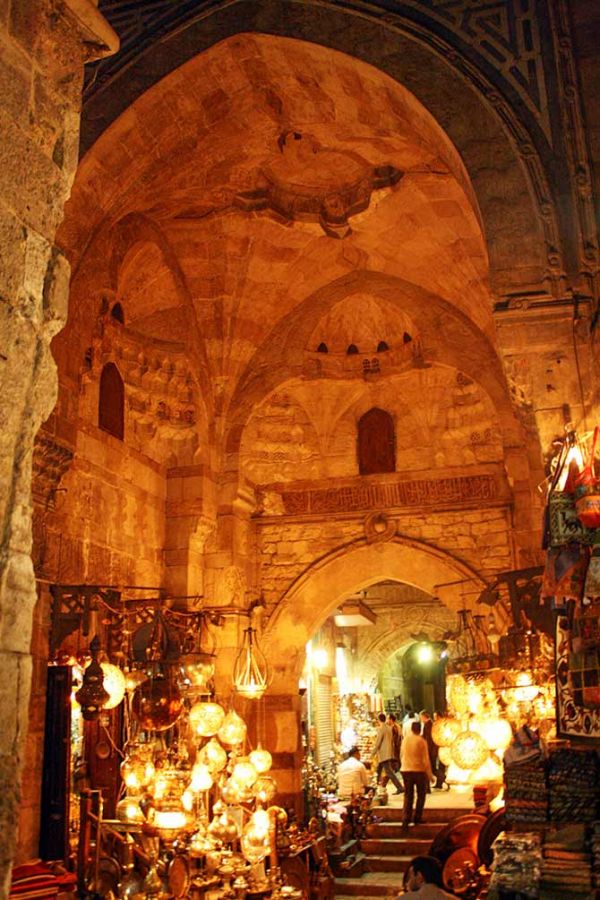 IMAGE: Commercial insanity reigns in Cairo's souqs, where people have been buying, selling and bargaining since 1382.
Photograph: Wikimedia Commons

Historic Cairo is a UNESCO World Heritage Site and its architectural wingspan includes the exquisite mosques of Ibn Tulun and Al-Hakim, ancient madrassahs and mausoleums, bustling alleys and souqs. Oh, the souqs!

Commercial insanity reigns in Cairo's souqs, where people have been buying, selling and bargaining since 1382. Haggle for antiques, ottoman covers, carpets… or perhaps you'd like to buy a camel?

To fully immerse myself in this cultural blast furnace, I negotiate a tangle of twisting alleyways of the centuries-old Khan el-Khalili bazaar where art and commerce coalesce to create an astonishing sensory experience.

The smell of frankincense and ittar suffuses the air. 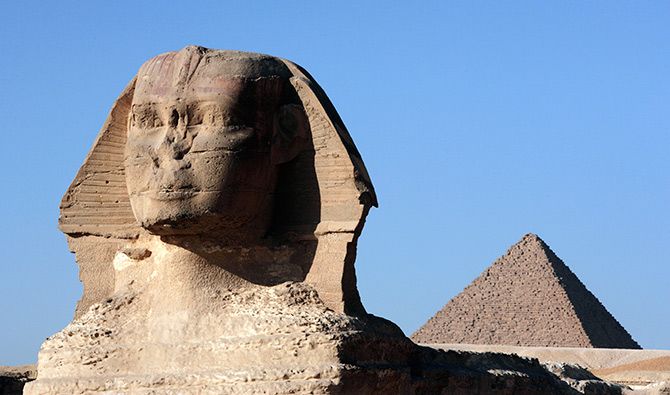 IMAGE: The Sphinx is seen in front of the Pyramid of Chephren in Giza -- one of the most enduring images of Cairo, which is allegorically called 'the Mother of World'.
Also read: Modern science can't unravel the pyramids
Photograph: Marco Di Lauro/Getty Images

Contrasting sharply with the souq's tumult is the beatific splendour of the pyramids of Giza.

Located just outside the city on a plateau on the Nile's west bank, these architectural wonders represent arguably the world's most magnificent man-made structures.

For centuries, this alfresco amphitheatre has symbolised the ancient Egyptians and their remarkable civilisation.

The dramatic setting of the pyramids, silhouetted against Cairo's skyline with an expansive desert panorama on the other side, is breathtaking.

As we approach Cairo's outskirts, the structures rise out of the desert like gods: the pyramids followed by the Great Sphinx. Our car fills with the whirr of cameras followed by a scramble to disembark as soon as the vehicle approaches the venue.

Strolling between man-sized lion paws and exquisite hieroglyphics, I imagine myself in the land of the pharaohs.

The Great Sphinx, an enigmatic creature that sports a lion's body and a human head, is anointed with a royal headdress. Located on the eastern side of the complex, it lies adjacent to the Pyramid of Chephren. The head, we're told, appears smaller than the lion's body due to erosion.

Hewn from a single piece of stone, it is the largest such structure in the world.

No trip to Cairo can be complete without paying homage to the mighty Nile, the world's longest river.

Flowing straight through the city, it splices it into half, its embankments accoutred with sky-tickling buildings. You could take a day-time ride on a felucca (traditional sailboat). Or an evening cruise, at which time the river glimmers at night like a glamorous diva.

We opt for the latter and feast on the glittering sights along the river banks.

Inside the ship, a tanoura dancer whirls incessantly while a belly dancer gyrates to the rhythmic beats of the darbuka (Arabic drum).

Our dinner table -- creaking under the weight of goodies -- showcases Egyptian delicacies like shawarma, ful, kushari and fresh trout that smells of the river.

The evening turns out to be a feast for all the senses. An appropriate metaphor for this dazzling city itself.