'The post office sells Base Camp certificates that serve as proof you were indeed at the spot, if doubting Firdauses ranked among your friends for whom a simple selfie from the spot is not enough.'

Day 1 A date with the eternal beauty: Everest

The distance from Tingri to Rongbuk, the closest halt to the Everest Base Camp, is a little over 100 km. But the journey took around four hours. The start took a while, with the vehicles having to have their engines revved to shake off the cold. 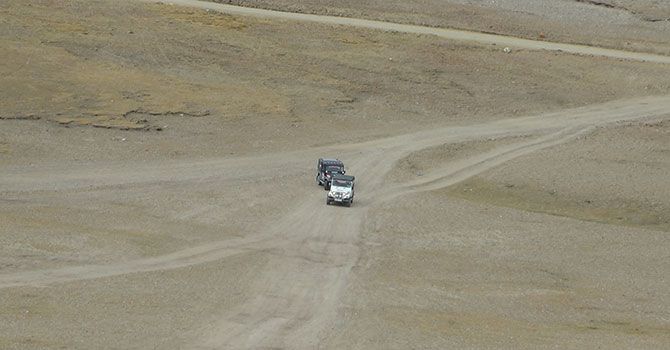 The two Mahindra Thars in the convoy show off their mean moves. Photograph: Priyanka Koijam.

The short journey took so long not because of the late start, but because there was virtually no road connecting the two towns.

Naturally, the terrain is made for SUVs, of which one saw plenty gliding over surface that would baulk a sturdy sedan. Our XUVs, Rexton and Thars were made for such territory, and it showed as they kicked up a dust trail to Rongbuk.

And judging by the oohs and aahs emanating from my motoring friends, this was also the high point of the drive. For it had everything one wanted on a trip like this: challenge, endurance, all framed against the abundant natural beauty. The terrain is made for SUVs which glide over surfaces that would baulk a sturdy sedan. Photograph: Priyanka Koijam.

There were no streams and rivers to make the drive hardy, but trust me, this path is enough to bring out the best in man and machine.

And well jostled, we reached our destination by late afternoon, hoping to make it to the base camp in time, before the peak hid herself behind the lurking clouds. Everything seemed just fine as we repaired to our hotel rooms sans lift, the altitude making heavy duty of the short climb up the stairs.

A typical Chinese lunch later we were ready for the base camp, but seems the Everest was not yet ready for us. Reports came in of cloud cover across the face of the mountain, delaying our journey. The good thing was that in China the sun sets up to 8 pm, thus leaving us with enough time to wait for the final go. Rongbuk also boasts of the world's highest monastery, and a quick visit was possible. The shrine to guru Padma Sambhava itself is nothing much to write home about, smelling dank and musty and populated with eager merchandisers. The Dalai Lama, who continues to be respected across Tibet, and whose monastery in Dharamshala in India is a role model, surely wouldn't want to know more about this.

Around 5 pm we decided to chance it to the base camp, and offroaded the last few kilometres to the parking lot from where the only means of transport to the base camp is the government bus run by the Chinese. This parking lot has tents housing various things -- vending tea to local artefacts. The world's highest post office, where else but near the Everest Base Camp. Photograph: Saisuresh Sivaswamy/Rediff.com

Yes, the world's highest post office is also located here, run by the Chinese, where for a price (5 yuan) you get a post card, and for another four yuan you can mail it to anywhere in the world (my daughter in New York is still awaiting hers).

The post office also sells Base Camp certificates that serve as proof you were indeed at the spot, if doubting Firdauses ranked among your friends for whom a simple selfie from the spot is not enough. The last stretch of the drive to Rongbuk had all the elements of an ideal drive: challenge, endurance and abundant natural beauty. Photograph: Saisuresh Sivaswamy/Rediff.com

Our efforts to reach the base camp from here were futile, since the cloud cover across Everest had only increased; in fact, as we were cooling our heels in a local store with yak butter tea and coffee, it started to snow. Not copious amounts, but just a drizzle, but it was enough to send the team into raptures.

A Chinese 'Passager Facility', aka the restroom, on the way. Photograph: Saisuresh Sivaswamy/Rediff.com

We returned to our hotel with its Chinese dinner and awful toilet (note to potential travellers: Please pack enough Imodium, you will need it), promising to leave nice and early for our morning date with Everest.

Ah, but what's it they say about the best-laid plans of men and mice?