Saurabh Pandey of fotokatha shares some stunning pics he clicked during his visit to Kenya's beautiful game reserve Maasai Mara.

"For most of us, our first introduction to lions was through The Lion King," reveals photographer Saurabh Pandey.

"So, it is only natural that when you visit the African savanna, you're on the lookout for the king of beasts and some semblance to the Disney film.

"Yes, the sunsets in Kenya's Maasai Mara are as stunning and the landscapes as mesmerising as the Disney film.

"Though dubbed the king of the jungle, the truth is that there is no lead lion like the majestic Mufasa. It is in fact the lioness who is in charge.

"That said, a visit to Maasai Mara is as magical (if not more) as the movies, and I did find my own version of a curious cub and romancing cats."

Scroll down to see some of Saurabh's breathtaking pics (and silhouettes) from the Kenyan game reserve. The story dates back to August 2018. After witnessing incessant rains for days, the sun finally decided to grace us.

The weather couldn’t be more perfect. It was a little after sunrise when a lioness walked past our safari vehicle with womanly grace.

Within minutes, we saw a rugged male heading straight toward our jeep. His eyes were glued to the lioness, and he was distracted for just a second.

He threw us a steely look and that’s when I clicked the picture. 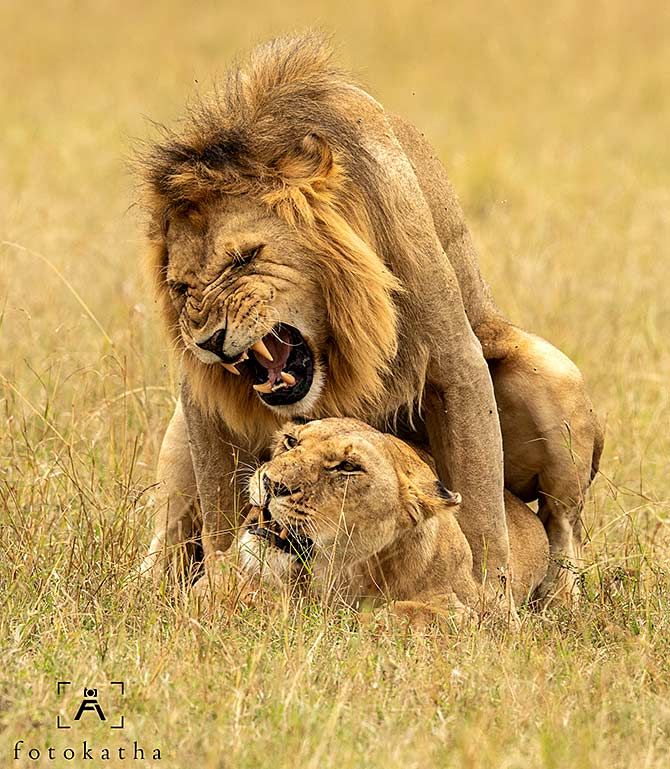 Not the one to be bothered by a couple of tourist jeeps, the lion was a man on a mission. He crossed our car and walked toward the lioness.

We repositioned our car and kept our fingers crossed in anticipation of what was about to unfold. And rightly so, the mating dance began.

A mating pair mates multiple times during the day, at short intervals of about 20 to 30 minutes.

The ritual lasts for about a minute. We knew that if we waited long enough, we could watch them mate again.

After all, it's not every day even in Maasai Mara that you watch the king and queen of the jungle mate. As the lion roared, I clicked this image. 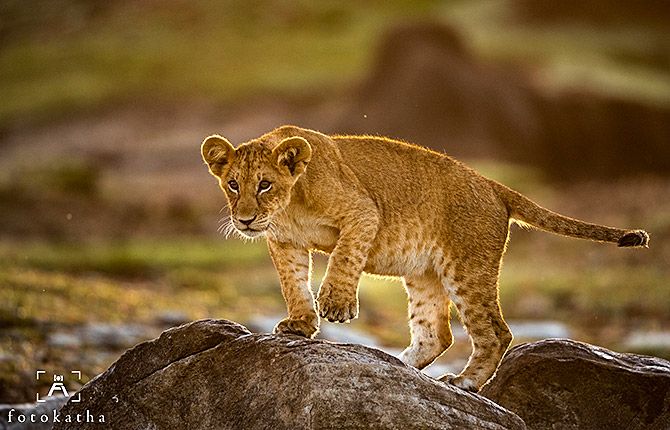 On a sunny morning in September last year, we encountered a pride of lions, christened Ankuyana -- a couple of lionesses and a few cubs in tow.

One of the old lionesses walked into the sun and perched herself around the bushes to watch over the playful bunch.

The cubs were climbing rocks, running around and that’s when one little cub got me hooked. He was more mischievous than the rest and started to stray like all naughty lads do. 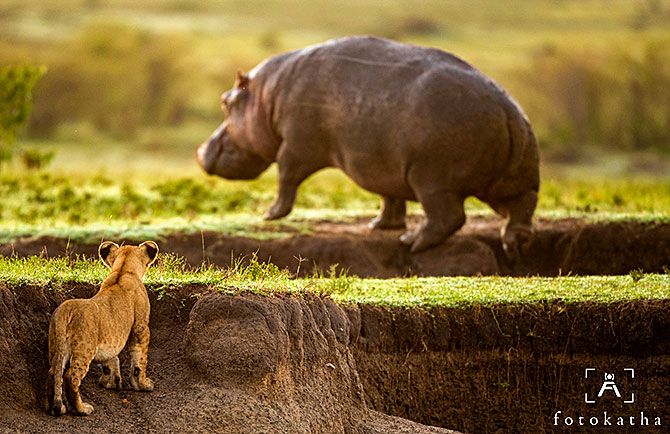 Our little cub spotted a hippo -- one of the most temperamental animals found in Africa -- and began stalking it.

It was way too early for this bratty cub to start hunting but probably he was emulating his mother and the other lionesses from the pride.

Hippos aren't easy prey even for full-grown lions, let aside a cub.

We watched nervously as the cub got too close to comfort. What if the hippo noticed him? He’d be history within seconds.

But before the eager cub got the hippo's attention, a lioness saw that the little one was up to no good. I heard a call and I guess it was the mother asking him to watch out, mind his step.

Gladly, he paid heed and held himself back. He watched silently as the hippo walked past. I was taken by the courage of this little fellow; he was a lot like Simba -- eager to grow up and go on a hunt. 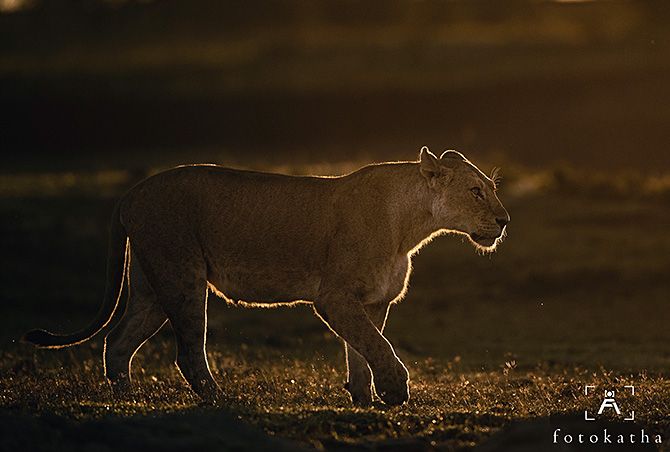 That grace...that poise...that look! The lioness is clearly the one in charge here. 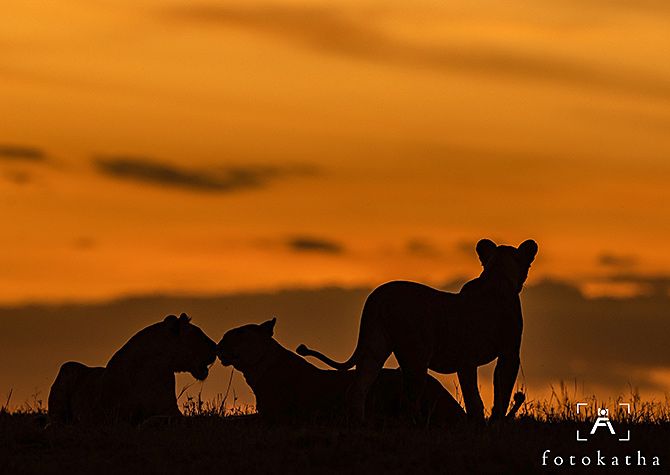 With the setting sun making for the perfect backdrop, I clicked this image of the pride resting in the grassland.

There's not much of a tale to tell here, but to speak in terms of human behaviour, to me it appeared as if it was ladies' night for these three beautiful lionesses.

And as we all know when it comes to friendship and sisterhood, three is never a crowd. 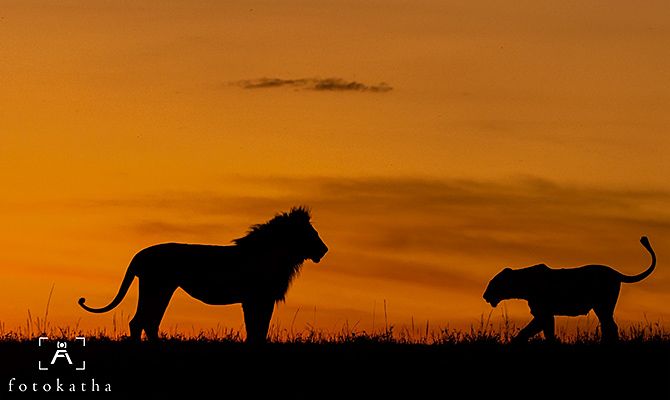 A silhouette of the king and the queen. 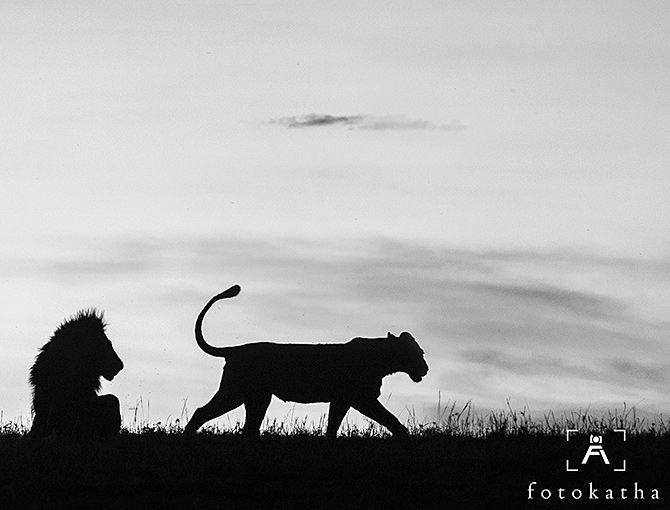 One evening, just before sunset, I was lucky to spot the Topi pride. I waited for an hour photographing the gorgeous lionesses, experimenting with capturing silhouettes, when the male made a grand entry.

He sat on the grass, with his head held high, when one of the lionesses decided to walk up to him.

After a brief encounter, she turned her back and started walking away from him.

I do not know what conspired between the two, but it appeared like the lion was urging his woman to wait, to stay back but clearly she was in no mood for love. 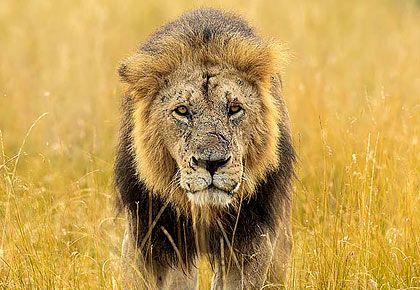 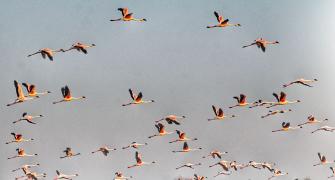 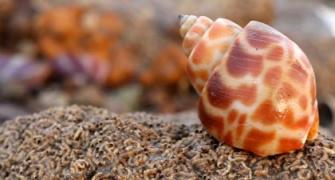 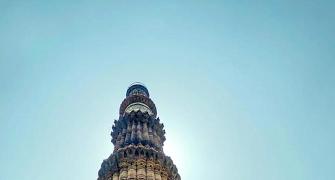 10 photos that will inspire you to travel to Delhi 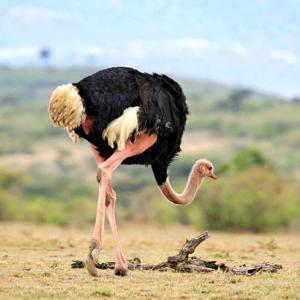 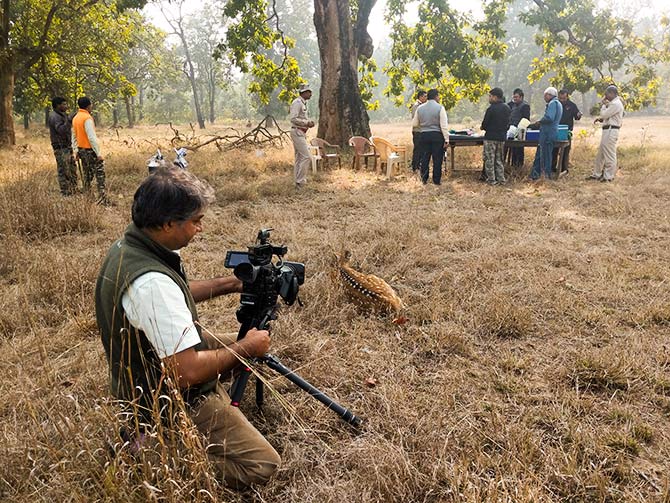