Lakshmi Sharath loses herself in the narrow lanes of a magical city. 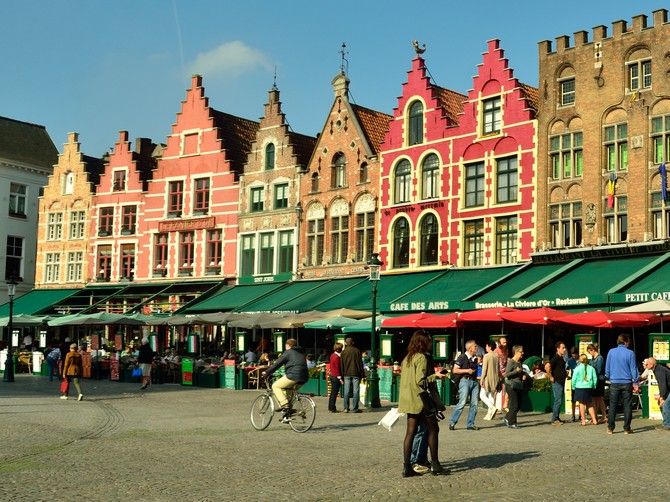 I was transfixed for a moment.

A cute teddy bear beckoned me.

A cranky old man was grinning.

A skeleton lay there in its grave.

A row of houses looked inviting.

And everything seemed so delicious -- from cuddlesome animals to clinging lingerie, from swans to skeletons, from quaint houses to funny faces.

For everything in Bruges is a creamy chocolate.

It took me just an hour to reach this fairy tale land from Brussels.

But it was worth standing in the train for almost half the journey trying to find a seat as a mass of tourists rushed in.

The town looked like a scene out of a picture postcard as the bus dropped us at Markt Square at the historical city centre, a World Heritage Site.

A medieval bell town the belfry dating to the 13th century towered over me at 83 metres with 47 bells creating music.

Adjacent to it was the historium, where the tourists got immersed in the medieval world of Bruges.

Layered with cliches and oozing with charm, this old town was steeped in a world of horse carriages trotting on cobbled streets, encircled with canals which almost seemed to embrace the town. 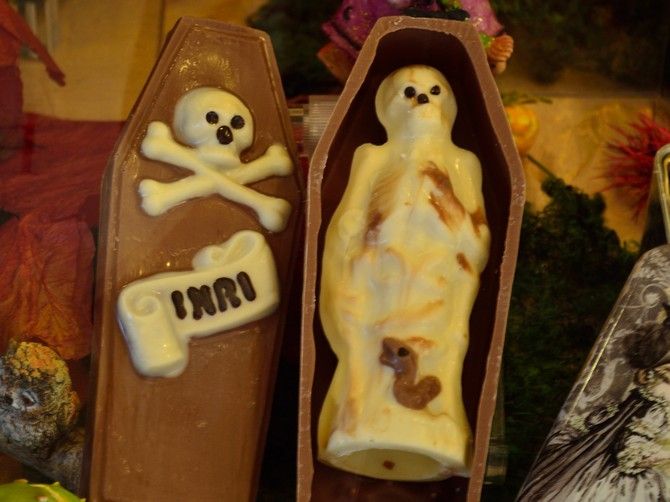 It was a beautiful day.

Bright and sunny as wisps of clouds reflected in the sparkling blue green waters.

I decided to go on a little tour of the old town on a pretty boat.

Pink balloons floated in the air as I found myself in an idyllic world with petite ancient monuments lying still along the banks of the canals.

Swans swam past me.

The voice of my boatman seemed to be lost in the air. He lingered for a while at a romantic hot spot -- the Rozenhoedhaai.

It had a sense of timelessness to it.

But it was in Groene Rei where I left my heart behind, somewhere along the old bridges arching over the waters as the trees caressed them gently -- a scenery that typically characterises Bruges' landscape.

And this is where I heard stories.

Every town has its own little mascot; Bruges has its swans.

As I cruised along the canals, the swans came towards us, almost greeting us to its town.

The boatman said that they had arrived in Bruges more than 600 years ago, around the 15th century but they did not come here by choice, but as a punishment to the locals.

The story goes that a rebellion broke out and the locals executed an administrator Pieter Lanchals and made the king, Maxmillan watch his friend being killed.

Maxmillan escaped the rebellion but he apparently passed a decree later that the canals of Bruges should always have swans floating in them for eternity.

Lanchals apparently referred to "long neck" in the local language and as the family coat of arms featured a white swan, it only seemed befitting to Maxmillan that the town remembered Lanchal through the birds.

But watching them gently floating in the waters, ambling along aimlessly, I could not believe that they could be a reminder of a gruesome story.

A fairy tale land is not complete without its own tragic love story.

After the cruise, I walked along the old town looking for a lake of love called Minnewater.

The heavy hoofs of the horses followed me everywhere as I walked along the labyrinthine network of tiny cobbled streets.

Finally, the trees parted and I could see a placid lake flowing quietly, surrounded by a dense canopy of trunks and branches.

A bridge took us to a world filled with dark mysterious shadows.

It was a wee bit melancholic but with a tinge of beauty.

The trees were still.

The sun slowly disappeared under the clouds.

The lake of love had immortalized the lives of the star crossed couple -- Minna and her warrior Stromberg.

She had died in his arms here as she escaped from her father who wanted to marry her off to a man of his choice.

I stood there for as long as I could get lost in the world of legends.

As the trees gently touched the waters, the winds blew through them creating ripples as the lake came alive.

Walking back, the pretty chocolate shops greeted me.

Most of these shops had been as old as Bruges and the people here proudly claimed that they created chocolates by hand and with lots of love.

Waffles were tempting and the fries of Bruges were virtually souvenirs here as the tiny shops were thronged with tourists. 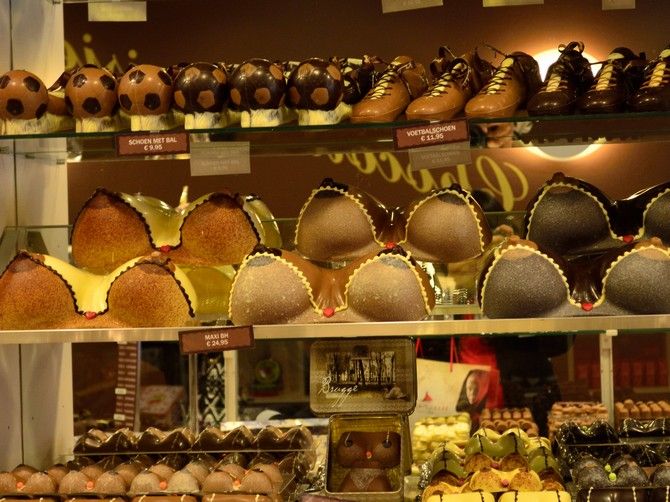 I stopped by at a traditional pub to try the local beers -- a couple of fruit beers and a dark flavoured beer with a Lambic blend.

As I walked along, I realised that Bruges is not just a tourist destination.

It is a Utopia that has been created out of thin air.

Everything about it -- the old bridges, the little benches by the canals, the curio shops, the colourful monuments that seemed straight out of a toy store, the delicious chocolates, the horse carriages -- they all seemed to be an illusion.

It seemed too beautiful to be real.

I spent the rest of the day in a dreamy stupor, walking aimlessly around, until the town took over me eventually.