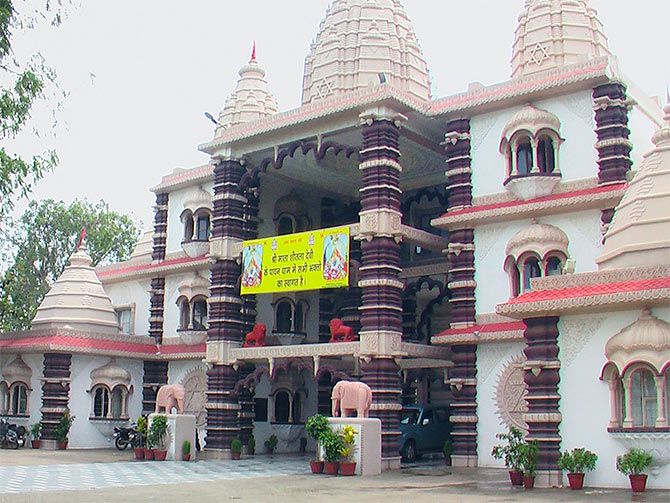 My earliest memory of the Mahabharata goes back to the days when I would watch B R Chopra's eponymous television series every Sunday.

Guru Dronacharya, teacher to the bickering Kauravas and Pandavas, was always just a benign, fatherly figure, torn between playing favourites and forced to be loyal to the kingdom of Hastinapur.

He was above all blame and his character was only marred by his treatment of Eklavya, the guru's loyal student who had to sacrifice his thumb to prove his devotion, and Karna, who Dronacharya refused to teach because of his lineage.

Some 5,000 years after the original Mahabharata is said to have played out, residents of Dronacharya's supposed village in Haryana, Gurgaon, are struggling to recall even local folklore associated with the guru.

"I think there's a Metro station in his name," says a resident of old Gurgaon.

While some believe that the 'gur' in Gurgaon stands for an erstwhile gur mandi (jaggery market), others maintain that it signifies the guru.

But there is little that honours Dronacharya's mythic association with Gurgaon.

Barring a couple of educational institutions named intuitively after a mythic teacher's name, a lone statue in one Tikona Park in old Gurgaon is the nearest to any commemoration.

Jyoti Sagar, chairman and founder of law firm J Sagar Associates and a resident of Gurgaon for 25 years, says that he, too, remembers only the Metro station named after Dronacharya.

"Most parks and stadia in Gurgaon have been named after contemporary political leaders."

In fact, Atul Katarya, a lieutenant who died in the line of duty, has several more chowks and roads named after him.

A peculiar consequence of this absence of Dronacharya from local memory has been the rise of Dronacharya's wife, Kripi, as a cult figure in the region.

Peculiar, because Kripi barely features in the Mahabharata, and even when she does, it is as an extension of the two warrior-teachers -- her brother, Krupa, or her husband, Drona.

She makes an appearance on Wikipedia, too, as an extended reference of these two characters.

But going by the long queues outside the Sheetla Mata Mandir in Gurgaon -- Kripi came to be known as goddess Sheetla Mata over the years -- it is evident that she has found her place in Hindu religion and mythology.

Large groups of men and women of all ages huddle around the massive shrine, offering red dupattas and rice crisps as prasad to the goddess who has now become famous for ridding all sorts of illnesses.

Deftly sorting coconuts and rice crisps into their respective containers, Arun Sharma, the head priest at the temple, is a little perplexed that I want to know about Dronacharya and not Sheetla Mata.

"Many years ago, it is believed that this village was gifted to Dronacharya by king Drupad. They say this is the place where the Kauravas and the Pandavas learnt their martial skills," he says.

When the time came for Dronacharya to seek his reward, Drupad refused to part with his wealth.

"It is said that a panchayat was held to decide on this dispute and, finally, Drupad gave Dronacharya 18 villages. What we know as Gurgaon today was the central village in this cluster," explains Sharma.

And yet, not a single idol of Dronacharya can be seen inside the Sheetla Mata Mandir.

Shyam Singh, a local resident, tells me he has come to offer prayer for his wife who is unwell. But when I ask him if he knows about Dronacharya or Kripi, he laughs and says, "Are you from Kaun Banega Crorepati? I don't know the answers to these general knowledge questions."

Sharma, though, adds that very little remains of Dronacharya in rural Gurgaon and there are no clans who trace their roots to the guru.

All that is left, he says, is an unattended piece of land that was believed to be the pond in which Dronacharya would bathe before conducting archery lessons.

"There is also a palace in ruins nearby that people say belonged to Dronacharya."

The palace is located just a couple of kilometres from the temple, but only a handful of those who live in the area seem to know where it is.

I approach two young men dressed in jeans, t-shirts and shining new sneakers to ask for directions to Mahalwada, the site where it is believed the ruins of the palace are.

They lower the volume of the smartphone -- the latest Yo Yo Honey Singh is blaring from it -- only to shrug and say they have no clue.

Walking inside narrow lanes that are remarkably clean, I reach my destination. The palace walls have large cracks on them, but the structure does not look 5,000 years old.

Even with my limited architectural knowledge, it appears relatively recent, especially the motifs on the doorways and corridors.

Two young boys, who graciously offer me a tour of the palace, warn me of the bats that I may encounter on my way in. Over the years, locals have occupied the palace.

Its current occupant is a supplier of plastic bottles. Unaware of the supposed history, onlookers seem both perplexed and amused at the attention they are receiving.

Lakshmi, who is in her 70s, says that even this tiny connection to Dronacharya is disputed. "This was where Dada Singha (a local ruler) lived around 200 years ago. I don't think Dronacharya had anything to do with this other than the fact that Singha found Kripi's idol buried here," she says.

Kripi seems to have surpassed her husband in local legend too, especially since a trope of miracles, dreams and visitations have made her more contemporary to her followers today.

Dronacharya, without a visual representation, only lends his name to the village, that too indirectly.

Both Sharma, the priest at Sheetla Mata Mandir, and residents near Mahalwada suggest that any "real evidence" of Dronacharya's Gurgaon connect is at Pinchokda Jhod, the site of the pond.

While I have no trouble locating or reading about Sheetla Mata Mandir on the Internet, there's almost no digital trace of Mahalwada or Pinchokda Jhod.

Sharma, too, seems to have little regard for the temple associated with the pond. "You won't find anything there. This is the only temple remotely associated with Dronacharya that people even know about," he says.

Only a local paan shop owner seems to know where this temple might be located.

For Sohail Hashmi, writer, filmmaker and activist, the question to ask is whether Dronacharya was a historical or mythological figure. But Bibek Debroy, economist and author of the Mahabharata series, has a counter to this argument.

"Gurgaon was a village and history is always written from the perspective of towns. For this reason, one may find limited mention of Gurgaon in the Mahabharata. And this is why one will find archaeological evidence in Mathura or Dwarka, because these were capitals of the kingdoms."

But this neither proves nor disproves the history of Gurgaon and its association with Dronacharya, he adds.

With a red flag over its dome, the only sign that this temple in Bhim Nagar is dedicated to Dronacharya is a board for the office of a school that reads Shri Guru Dronacharya Nishulk Shiksha Kendra.

Located on a busy street, with its usual urban chaos, I almost mistake the temple for the office of a local political leader -- her face is prominently printed on a large hoarding for a charitable trust that works for the rights of the girl child.

Inside the temple, Chhote Jha, the priest and the lone occupant of the premises, appears to be irked both by my presence and by my questions about Dronacharya.

"He was the first warrior in the whole universe," he says. "The work that NASA and ISRO do today is his legacy. When we have all that, why do we need a flashy temple like the Sheetla Mata Mandir?"

Jha's words bring to mind literature written by P N Oak, a Hindu-revisionist historian who claimed that the Taj Mahal was originally a Shiva temple (called Tejo Mahalay) and Australia was actually an uninhabited island for storing weapons (originally known as 'astra alaya.'

Jha hints at the monetary fruits that his temple seems to be losing out on, but swiftly changes the topic to fickle public memory.

"Eklavya once made an idol of Dronacharya and learnt his martial skills. Today, only those who truly want to learn from Dronacharya will do that."

There is not a single idol of Dronacharya in the entire temple precinct.

At the site of the supposed pond, vegetation grows over uneven land. There is no signage to demarcate a site of seeming religious significance.

A stairway leads down to the untended land, with a doorway that is named Baba Khatu Shyam Dwar. This doorway, constructed in 2013, leads to a satsang hall, but the plaque mentions nothing about Dronacharya.

At least the voice of a woman announcing the arrival of the Metro train at Guru Dronacharya station keeps his name alive in public memory.