Deepak Gupta grows chemical-free food and wants farmers to go back to the practices they once knew but have forgotten, says Aditi Phadnis. 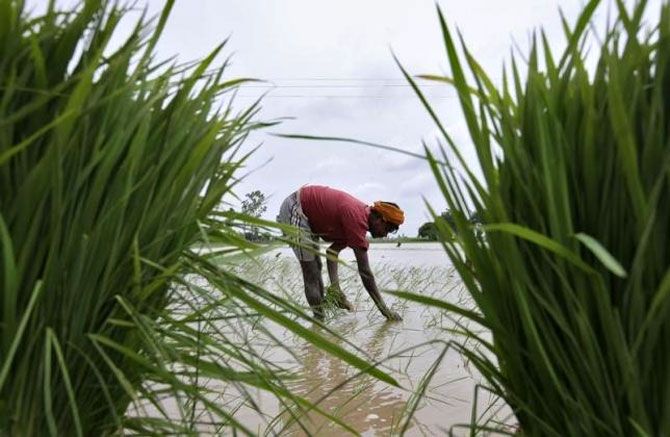 IMAGE: "Natural farming uses desi Indian seeds and the crop itself serves as seed for the next crop; it is farming the way our ancestors used to do. True, labour costs are higher. But what you produce is pure and additive-free," says Deepak Gupta. Photograph: Reuters

As career changes go, it is nothing short of dramatic.

Banker Deepak Gupta has turned farmer. Not just any farmer -- he grows and retails only organic fruit and vegetables. And not any organic either -- natural farming only.

As a child whose father was in the railways, Gupta travelled all over India during his growing-up years.

In the early 1980s, he studied in Delhi's Shri Ram College of Commerce, did an MBA from XLRI and worked at HDFC Bank and ICICI before winging it to Johannesburg and Toronto as a banker.

International exposure led to a deeper appreciation of the way things were done at home, especially when it came to lifestyle.

The organic food movement in the West was the result of consciousness that chemical poison was leaching into human bodies, causing mutations and leading to diseases such as cancer.

After Gupta and his wife Smita returned to India in 2012, they decided to get into organic farming though they knew nothing about it. Their company is called Organic Maati.

"I came to know that there was a farmer in Sonipat who was growing organic vegetables," Gupta says.

"I had his name and 'Sonipat' as the only coordinates. I drove there. I drove for miles but just couldn't locate him. It took an hour on foot to finally find him. His name is Ramesh Dagar and he taught me a lot."

Gupta's other guru was Subhash Palekar, the Vidarbha-based proponent of Zero Budget Natural Farming that goes beyond organic farming and uses only desi seeds and cow manure, thus costing next to nothing by way of inputs.

Organic farming follows a mechanical template: If you've left land fallow for three years, used no chemical fertilisers and inputs (and a couple of other to-dos), your produce qualifies as organic.

"GM seeds produce more, are hardier and need less labour, but they are expensive and good for only for one crop," he explains.

"If one crop fails, you are bankrupt -- you have nothing. Once you get hooked on to GM, you keep returning to them -- and then it is pesticides, chemicals and the whole shebang. Can that really be good for you?

"Natural farming uses desi Indian seeds and the crop itself serves as seed for the next crop; it is farming the way our ancestors used to do. True, labour costs are higher. But what you produce is pure and additive-free." IMAGE: Organic Maati is yet to break even. But Deepak Gupta and his team is getting there. Photograph: Kind courtesy Deepak Gupta/LinkedIn

He realised that chemical-free food was just one part of an experience that more Indians needed to go through.

So Smita launched a line of clothes for babies that uses only vegetable dyes. A range of personal body-care products has just been launched.

Gupta has embraced the world of back-to-basics by launching a farm experience anyone can have without actually owning a farm; he takes land on rent, cultivates it for fruit and vegetables, paying locals to do what they do best.

For a small sum, anyone can be the "prince" of that piece of land, enjoying 50 per cent of the produce and treating farm visits as weekends away from the stress and pollution of cities.

But does it earn him any money?

"Not yet," he says. Organic Maati is yet to break even. But the team is getting there.

"We are very small currently, with only 15 families in the rental farming model," he adds.

For him, what is rewarding is that more and more farmers are waking up to farming practices they once knew but had forgotten and are producing natural and/or organic produce, re-learning from Gupta.

He is content, knowing that once they scale up their operations, he would be able to make it a commercial enterprise -- and be at peace with the earth.