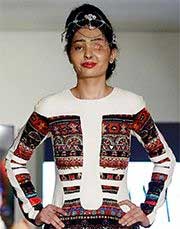 'I don't know how I managed to get home, but when my mother first saw me, she fainted.'
'Just because someone ruined your face doesn't mean you stop being beautiful.'
'Life goes on.' 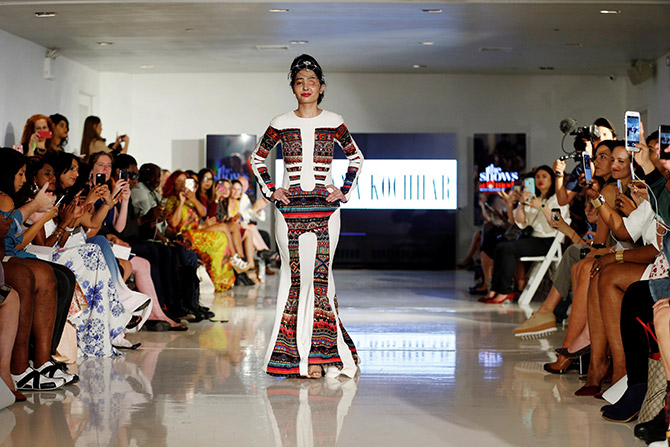 IMAGE: Reshma Qureshi presented a creation from Indian designer Archana Kochhar's Spring/Summer 2017 collection during the New York Fashion Week. She was greeted with a loud cheer and applause.

Seated in her tiny home in Kurla in north Mumbai, Reshma Qureshi has plenty of unanswered questions.

"How come it's easier to buy acid than get the right shade of lipstick?"

"Why can't people treat me normally, just like they would treat other girls my age?"

Reshma is just like any girl her age. She shares the same excitement of a 20 year old who will be visiting New York for the first time.

Ask her why she is headed to New York and she says, "I will be walking at the New York Fashion Week."

"Earlier I had never taken any interest in modeling," she adds, admitting that she still has to rehearse for the show.

Amidst the excitement Reshma is pretty clear about the message she wants to convey at NYFW: Stop the sale of acid in India.

Rediff.com's Anita Aikara talks to the braveheart and acid attack survivor about her transformation, life post the attack and her dream to help reinforce the ban on the sale of acid in India. In 2013 the Supreme Court banned the open sale of acid in India, but it is still freely available in most parts of the country. 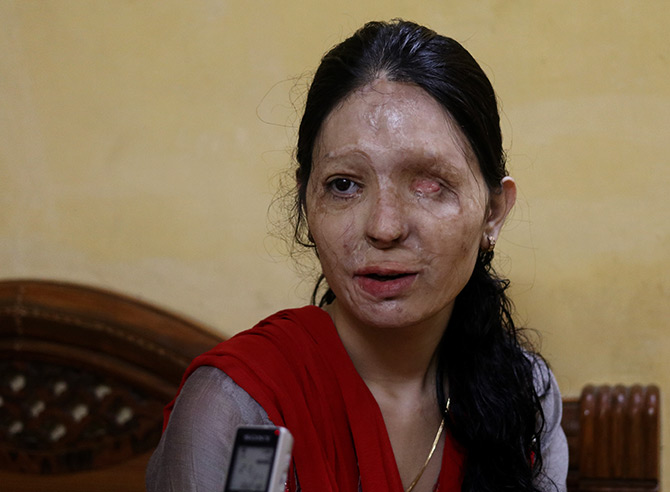 IMAGE: Reshma Qureshi at her home.

Are you excited to walk at the New York Fashion Week?

When I walk, people will see me in this state and yet accept me.

That will definitely boost my confidence and that of the many acid attack survivors who will be watching me.

There are many such survivors who are scared to step out of their homes for the fear of being mocked and judged.

Once they see me on the ramp, I hope it will give them the courage to confidently step out of their homes.

Look at me. Did I do something awfully wrong? Then why should I hide my face?

The opportunity to walk at NYFW came through thanks to Ria Sharma from the NGO Make Love Not Scars.

It's my first trip abroad and I'll be there for two weeks.

I don't know who I'm walking for. I also don't know what I will be wearing on the ramp, that shall be decided once I am in New York. But I am very excited.

At the fashion week, there will be several people taking interviews. I plan to spread awareness about acid attacks and talk about why acid should not be freely available. 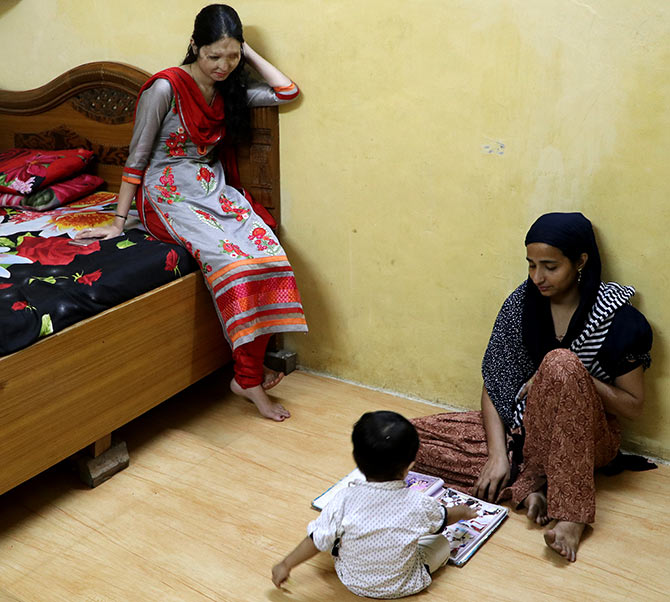 IMAGE: Reshma looks on as her sister plays with her nephew, Ayaan.

It has been over two years since you were attacked...

My sister and her husband were having some domestic issues around that time. He used to harass her and also beat her.

So my family decided to get her home. My sister had a four-year-old son and we put him in a school. But they took the child away and so we had to file a case against them. The day of the hearing, they attacked me.

I was with my sister and was going to write my exams. My brother-in-law was waiting for us with his cousins. They caught my sister's hand. She yelled and asked me to run. Scared, I started running when they caught me by my hair, threw me on the ground and doused my face with acid.

I yelled in pain. I cried for help, but people just turned a blind eye. They gathered around us and watched us in pain, but not a soul stepped forward to help.

Lying on the ground, I cried, hoping help would come soon. 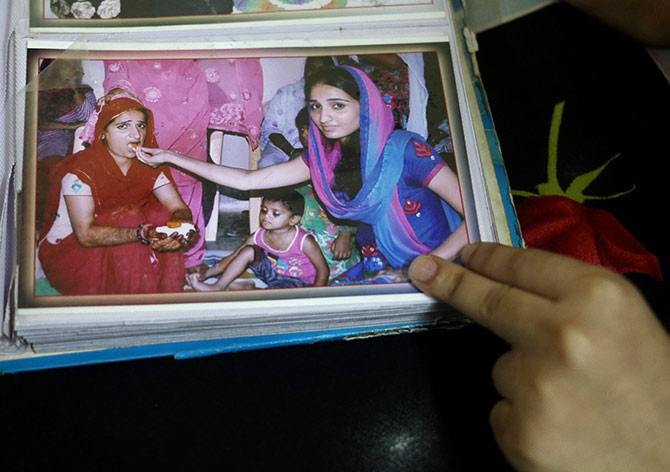 IMAGE: Reshma, right, before the attack, at her sister's wedding.

I don't know how I managed to get home, but when my mother first saw me, she fainted.

I was taken to a small hospital nearby, but they refused to admit me. They wanted an FIR (First Information Report) filed. For the next 5, 6 hours I sat at the police station in pain.

You had to be present at the police station in that condition?

Yes, I had to sit there. No hospital was willing to admit me. After seven hours I was sent in an ambulance to a government hospital.

By that time, I was not able to see anything. I feared that I had lost my vision. My face was swelling up.

Then my father and brothers admitted me to a private hospital. I was there for four months.

During that time I could see with both eyes. But soon I stopped being able to see with my left eye. I think the hospital didn't act quickly and they ended up ruining the vision of my left eye.

My father, who is a taxi driver, sold his vehicle to pay my medical bills.

I was then brought to Mumbai and a surgery was done at a government hospital. I was admitted in the night and the next morning they did the surgery. The doctors feared that I would lose my sight completely and rushed ahead with the surgery.

I was discharged after 15 days.

Coming back home didn't feel the same. My life changed and I went into depression.

For nine months I ate less, spoke little and didn't step out of the house.

Almost nine months after the surgery I got to know of Ria Sharma through Facebook. She is the founder of Make Love Not Scars (it is dedicated to helping victims of acid attacks by offering them medical, legal, financial and psychological aid).

She spoke to me for three hours and counseled me. Getting funds was a challenge, but Ria helped me greatly with that.

When I met her, my face was in a really bad condition. She helped raise funds for the treatment. 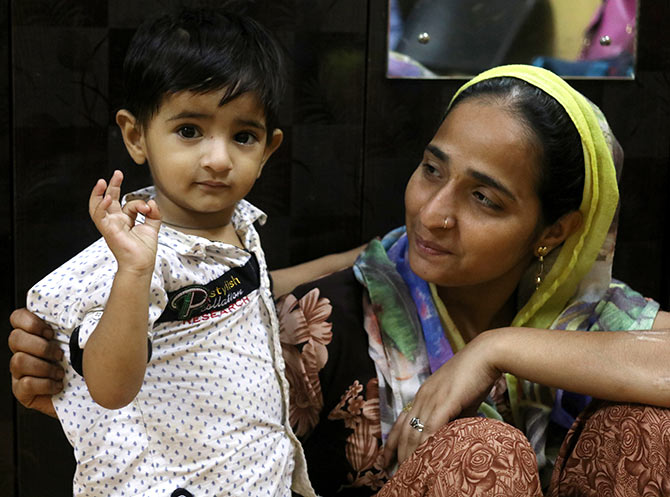 IMAGE: "Wow," says Ayaan when you ask him how Reshma looks.

How did your family react to the attack?

My family was very upset after the attack. My parents were in shock.

I am the youngest among three sisters and two brothers.

My father was extremely affected by the attack. But I decided to take control of my life and they too started being strong for me.

When I'd step out, I would get a lot of curious stares from people, which I still do.

It became difficult to step out without being noticed and stared at.

I often wonder why people look at me that way. What's my fault?

People would tell my parents that my life is ruined. They would taunt me.

I often wondered why people don't support the victim?

Why do they taunt us and add to our grief?

I insist that people treat me normally, just like they would treat other girls my age. We are no different.

If people come forth and support the acid attack survivors, they will feel good. But that rarely happens. That's why most of these survivors stay inside their homes.

Today, when someone gives me a judgmental look, I just ignore them.

But there are many who welcome me with a smile.

Recently when I was travelling from Mumbai to Delhi, three people on the flight wrote messages telling me that I'm beautiful. That was so sweet and I was thrilled to read those messages.

I'm glad that there are some people who understand us too. 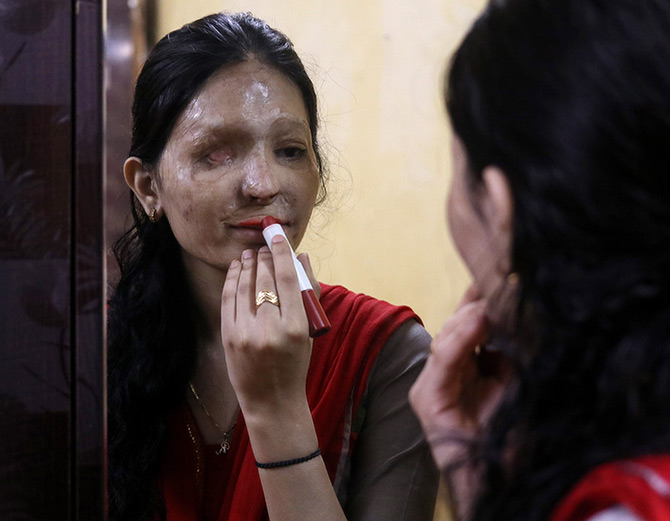 Do you feel beautiful?

When I arrived in Mumbai and was on my way to Sion Hospital (a municipal hospital in north-central Mumbai), I looked at the mirror for the first time post the attack.

I was scared and looked away. My face before the attack kept coming to my mind, and I failed to have the courage to accept reality.

I was angry and got upset with my parents for no fault of theirs. But they never gave up on me. They kept saying that they will see me through this difficult phase.

Now I don't hesitate to look at the mirror. Today I believe that I am truly beautiful and my face is very special.

No. Once my doctor had taken me for a fashion show in Mumbai (this was after the acid attack). I saw models walking down the ramp and felt happy seeing them.

Today I have got an opportunity to walk for NYFW and that makes me really happy.

I haven't practiced or rehearsed for it. I will just go with the flow. 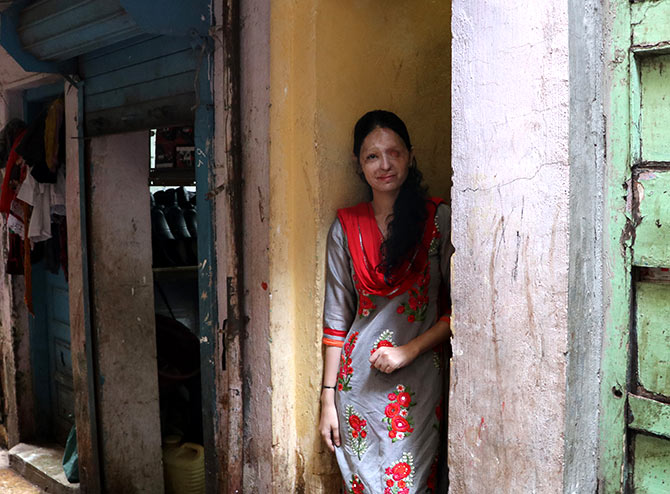 IMAGE: Reshma at the entrance to her home.

Did you have any dream? What was it?

I had dreamed of becoming a teacher.

I was working towards it too. I had completed my 10 standard exams. I was in the 11th standard, when they threw acid on me.

After that I struggled to get on with life.

What happened about your dream? Would you want to still pursue it?

After the attack, I want to help other survivors come out of their trauma. I have gone through a lot of pain and would want to help these survivors.

Somewhere I left my dream behind after the attack. But maybe in the near future if I got a chance, I'd like to get back to studying and pursue my dream to become a teacher.

I find it difficult to read, but I know that I will manage. 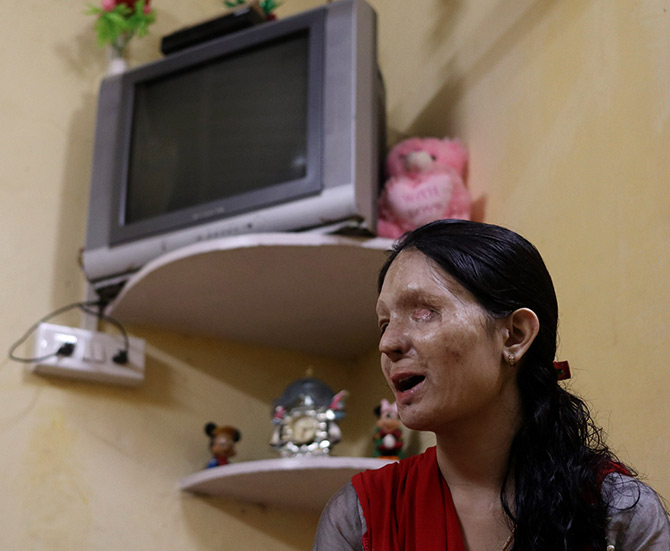 IMAGE: She enjoys watching Hindi television serials, but doesn't have a keen interest in Bollywood music.

Is the court verdict out yet?

The last I heard was that it got delayed. I am not following it and don't know much about it.

My parents were in Allahabad for the hearing, but they will be returning to Mumbai, so that they could be around when I am leaving for the US.

In 2013 the Supreme Court had banned the sale of acid, yet it is sold freely. When we go to buy medicines, they insist on a prescription. But acid is available easily and is very cheap.

You are a video blogger, who is giving helpful online beauty tutorials. How does it feel being in front of the camera?

There was a time when I didn't apply any make-up on my face. But today I enjoy putting make-up. My favourite lip colour is red.

I made an online video (Beauty Tips by Reshma) on how to apply make-up and that did very well. Then I did three more videos. Thankfully those videos did well too.

When I shot the first video, I was extremely nervous. There were so many cameras and lights, I didn't know what to do.

When the video was out, I watched it and read the comments. There were many women who had such good things to say and they supported me. That made me feel really good and it boosted my confidence too.

Your videos do have a powerful message hidden in them...

Yes. I urge my viewers to help enforce the ban on acid. I have also mentioned in the video that lipstick is available easily in the market just like concentrated acid. IMAGE: Reshma with her brother at the airport before boarding the flight to US.

A lot of people have supported me. I want to return the favour and support the many acid attack survivors who are out there.

Acid attack survivors should understand that they have done no wrong. The person who attacked us was wrong.

The survivors should just try to live life without fear and pursue their dreams.

Just because someone ruined your face doesn't mean you stop being beautiful. Life goes on.