'What struck me was how content the hermit seemed in his little cave, not at all self-conscious in proclaiming that it was the grace of Shiva that had brought him to Tapovan and it was Shiva who would look after him.'
Shyam Saran, India's former foreign secretary, relives his trek to Gaumukh and Tapovan. 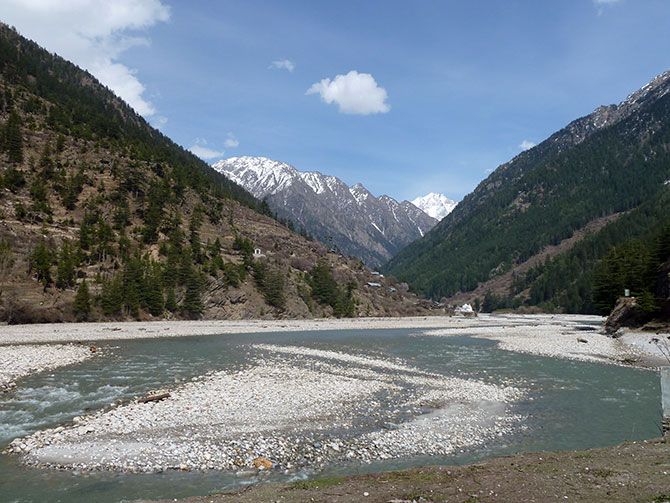 IMAGE: The Bhagirathi, with the majestic Himalayas as the backdrop. Photograph: Kind courtesy Time Traveller

In my several years of trekking in the Himalayas, I somehow never got the opportunity to visit one of the most sacred and revered places of pilgrimage: tThe Gaumukh glacier where the holy Ganga is born.

And further ahead, across the glacier and climbing a sheer cliff face of a thousand metres, is the pristine alpine meadow of Tapovan, whose ethereal beauty was for me mostly hearsay from envied trekking companions.

In the last week of October, I finally made the long awaited journey to this hallowed land.

It was no doubt a test of physical endurance, but also a spiritual quest, connecting one in ways that are indescribable to a landscape where every step speaks to legend and the congealed piety of millions of pilgrims making the same journey through countless centuries.

It is the landscape that compels humility. At other times, one may feel one's being stretched to immensity in the company of lofty mountains. I have felt this before on other treks in the mountains, but this had an added intensity.

The drive from Uttarkashi to the pilgrim town of Gangotri, along the Bhagirathi, is picturesque. With this road, Gangotri is accessible to hordes of tourists and pilgrims and is now a substantial town.

The Gangotri temple is a fairly modern structure that stands at the site of a more ancient shrine. The evening aarti was ruined by the play of multi-coloured disco lights and booming loudspeakers.

Perhaps this is what the goddess needs in order to gather a modern throng of devotees for whom a mere aarti with the pealing of temple bells is insipid. 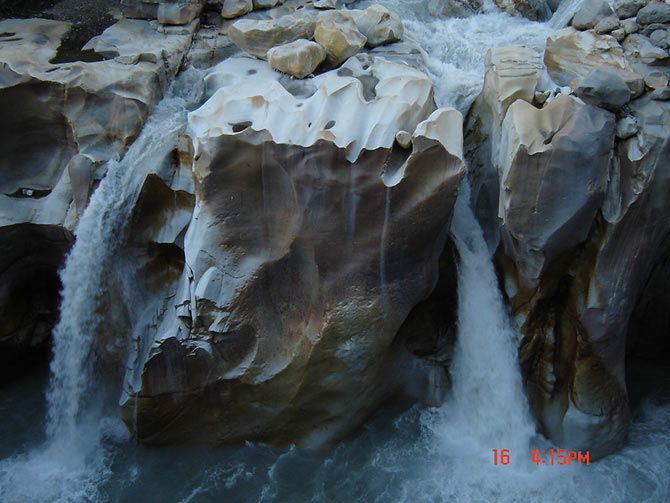 After spending a night at Gangotri, which is at about 10,000 feet and fairly chilly at this time of the year, I was on my way to Bhojbasa, the base for Gaumukh.

I started early because this was a long trek, about 15 kilometres, though without any steep climb.

The weather was perfect with not a cloud in sight.

The snow-capped Sudarshan peak that dominates Gangotri was etched sharply against the blue of the sky.

The trail runs along the Bhagirathi whose valley is a deep gorge, clothed in deodar, maple and oak trees. There were patches of yellow, rust and red as the trees changed colour with the approaching autumn.

About half way on the trail, the Sudarshan disappears behind an intervening cluster of peaks and, slowly but grandly, the three peaks of the Bhagirathi mountains come into view. Hereafter, they dominate the landscape right up to Gaumukh and Tapovan.

These mountains represent Sage Bhagirath who broke the raging descent of the celestial Ganga by receiving her on his outstretched thigh. Otherwise, the earth would have been swept away in a massive deluge. 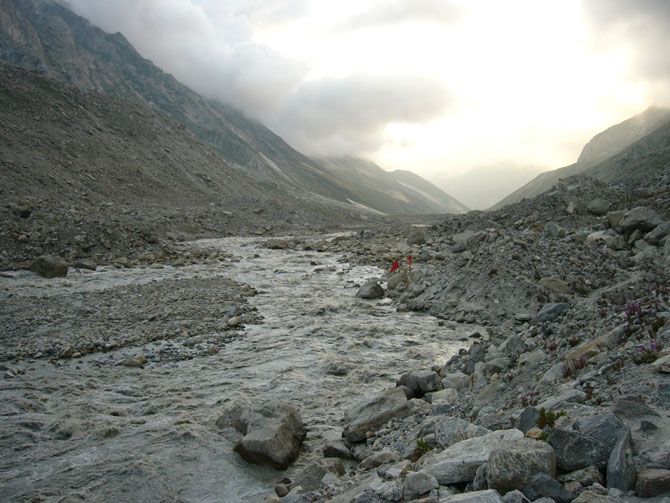 IMAGE: Another incredible view of the Bhagirathi. Photograph: Siddhanth Dhariwal

It was nearly four in the afternoon when I straggled into Bhojbasa, which has a cluster of sheds and tourist dormitories.

Bhojbasa gets its name from the forests of Bhojpatra trees that once covered this high-altitude valley but were mostly cut for timber or were washed away in floods and landslides.

It was encouraging to see that Bhojpatra saplings were being planted once again on the bare banks of the river. They will take a long time to grow to maturity.

Bhojbasa was bitterly cold and it became even colder as the evening advanced -- several layers of clothing seemed inadequate.

Next morning, I took off on the two-hour journey to Gaumukh with the Bhagirathi still by my side.

The serrated ice wall that is the snout of the glacier soon came into view. It is a massive amphitheatre of ice from whose floor melting ice soon becomes a raging stream.

It is an awesome sight, with Gaumukh framed by the Bhagirathi peaks in the background and the sacred Sivalinga peak, now visible on the right, witnessing the birth of the sacred river.

To get to Tapovan, one has to literally cross the glacier, over a two kilometre stretch. It is treacherous, even dangerous, because there are ice crevices, boulders and slippery patches of moraine.

After this arduous crossing, there is an almost vertical cliff face to be climbed, nearly 1,000 metres high, with no visible track in sight. I slipped a couple of times on loose pebbles, but finally made it to the top. 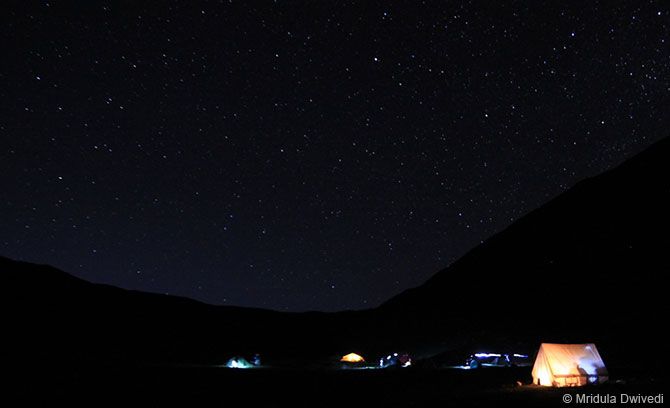 IMAGE: A view of the Himalayan night sky at Batal. Photograph: Mridula Dwivedi

It was an incredible landscape, a rolling meadow ringed by soaring mountains on all sides, with the three peaks of Bhagirathi and the conical symmetry of Sivalinga facing each other.

In the distance, I could see a whole herd of blue sheep grazing on the sparse grass that covered the ground. I walked closer to them and they seemed unafraid, watching me with curiosity.

As the sun began to set and the mountains changed colour from white to pink and grey, temperatures fell to below zero. And yet, I was enthused enough to venture out of my tent later that night to feast my eyes on the night sky, densely studded with sparkling stars and the Milky Way reflecting the sacred river below.

The next morning I paid a visit to a young hermit who had made his home in a cave just below the Sivalinga mountain.

The cave had been converted into unusually snug and comfortable living quarters, lined with wool and felt, and with thick rugs on the floor. He was 26 years old, had come from Gangtok and had taken a vow of silence for five years.

We managed to converse using sign language and when that failed, by writing on an exercise book. He had spent more than a year in Tapovan and meditates six to eight hours a day. He stays in the cave even during the winter.

I asked whether he had found his cave in an earlier recce. He said he hadn't, but had arrived in Tapovan answering the call of Shiva who had also directed him to the cave.

Once in a few months he would trek down to Gangotri to buy supplies but otherwise stayed in his cave.

What struck me was how content he seemed in his little cave, smiling easily, and enjoying the distraction we provided as his visitors and not at all self-conscious in proclaiming that it was the grace of Shiva that had brought him to Tapovan and it was Shiva who would look after him.

Tapovan, the home of the ancient sages, still works its magic on people.

I trekked back to Gangotri over the next two days, staying the night at Chirbasa ahead of Bhojbasa, in a campsite surrounded by oak and chestnut trees. It was pleasant and warmer than Bhojbasa.

It had been a difficult and arduous trek, but memorable nevertheless. Having touched infinity, one finds the finite somewhat more tolerable.

Shyam Saran, the former foreign secretary, is currently chairman, Research and Information System for Developing Countries, and senior fellow, Centre for Policy Research. He is also an avid trekker. 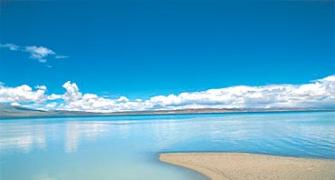 IMAGES: The breathtaking colours of Himalayas 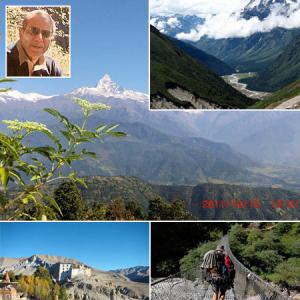 Travel: My top 5 trekking trails in the Himalayas 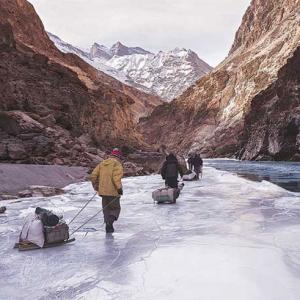