I was taken aback by the kind of influence these fictional characters were having on my four-year-old daughter and how blindly she was trusting them.

Her fragile mind was believing something that was not real and it came as a huge shock to me, says Avantika Kukreti. 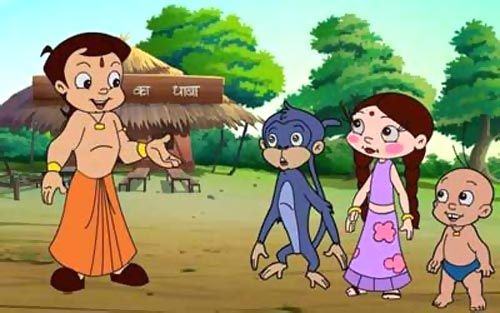 This February, we as a family, took a big decision to cut the cable connection and throw TV out of our lives for sometime.

For the last couple of months I was noticing that my daughter was becoming too fond of TV, so much that she would refuse to eat until the TV was switched on.

Another thing that was worrying me as a mother was that she used to get so engrossed in the shows that she would hold her pee and stools till the time there was an ad break! And, being a gadget-savvy kid, just like the other kids these days, she had mastered the art of using a remote with ease and would not even wait for me to switch the TV on for her.

I also started noticing that she was ready to do anything to watch her cartoon -- even refuse to go out to play in the park.

Then Chota Bheem came into her life and she wanted to have laddoos like him to become strong. But when I told her laddoos do not make you strong, she refused to believe me as "Chota Bheem says they do"!

And I don't even want to get into the horrible language that is used in these shows these days!

Even my daughter started using terms like "aye ladkee", "badtaameezz", "bevkoof" and some such words that we never use at home otherwise!

Needless to say, I was taken aback by the kind of influence these fictional characters were having on my four-year-old daughter and how blindly she was trusting them. Her fragile mind was believing something that was not real and it came as a huge shock to me!

That was the day I decided to put a cap on it. I would not let fictional characters take over my daughter's life and influence her. And I must say that it has been a good decision so far.

I must say the first few weeks were terrible. We would come home after picking her up from the daycare and she would demand to put some cartoon show for her and cry.

While initially it was a tough task convincing her to do something else, she slowly started accepting it.

Gradually, I asked her to do an activity that she likes like reading a book or playing with her toys or just sitting with me in the kitchen or living room and discussing the day with me.

Of course, it didn't happen on its own. I had to first discuss my daily activities with her and then she started opening up and, guess what, I entered into a world that was unknown.

She started telling me stories about her friends and how she's gotten fond of this one friend of hers and would talk endlessly about her. Then she told me about the teachers that she likes and why she does not like it "when I don't pick her up on time from her daycare".

Then came the invisible pets…

She would often say that she really liked being the "leader of the day" in her class and how she needs to take care of the little babies in her daycare as they were "really small". And, that she had some invisible pets that she takes care of "but it's a secret and only mummy can know about it".

These conversations were eye-opening for me and I would often feel a lump in my throat. I was surprised to see that my little girl was so expressive and had so many stories to share with me, which were all lying at the back of her mind all this while! And TV was the reason for it!

We also started spending more time on the dining table and I came to know that she was really fond of "peanut butter, cheese, porridge, lady finger, chhole, rajma and parontha".

We started having long, hearty meals and felt more close as a family. And, even after all this talk, we would still have free time to read books or sometimes play partner games on the iPad or just laze around on the bed doing nothing but indulging in some TLC.

TV is such a time-killer

Slowly, I saw that my daughter became a happier and more talkative child than before.

The most important fact that came out of this exercise was that TV can be such a time-killer.

We never knew we had so much time at our disposal and we were wasting it for something that was giving us nothing in return.

And while I do let my daughter watch better YouTube shows such as Peppa Pig, animated songs and movies, I am never getting the cable contract renewed again! Neither should you!

Lead image -- a still from Chota Bheem -- used for representational purposes only.