Reshma Qureshi's face was destroyed by acid. It did not stop her. 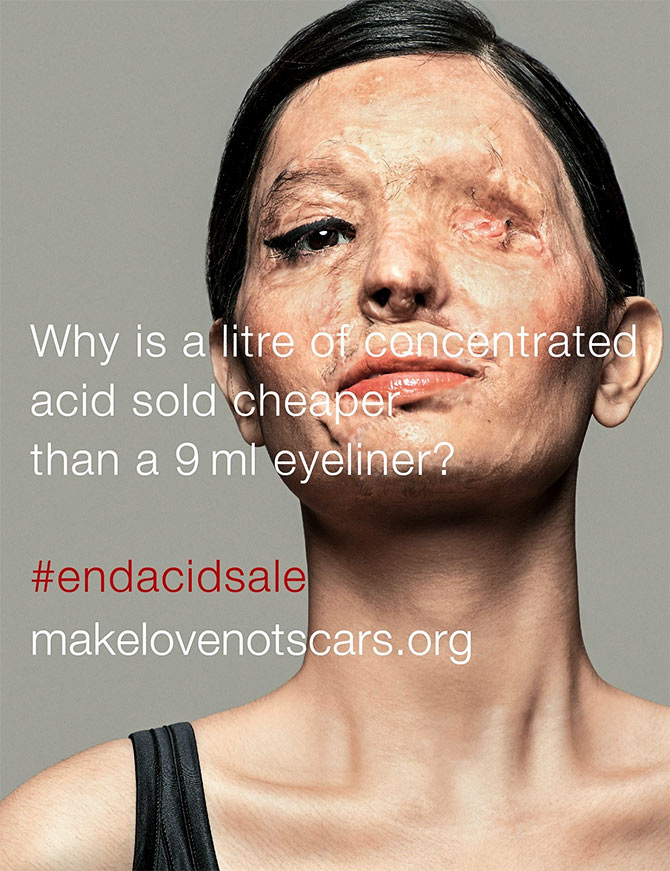 IMAGE: Reshma Qureshi overcame odds in an unjust world and dared to change it.

It was the first time she boarded an international flight and the 20-year-old took the journey to New York alone.

This opportunity came to her two years after she was attacked with acid on her way to her examination centre.

In an excerpt from her book Being Reshma: The Extraordinary Story of an Acid-Attack Survivor who Took the World by Storm, she reveals what it was like to walk the NYFW ramp and become a role model for millions. Scroll down to read an excerpt from the book. 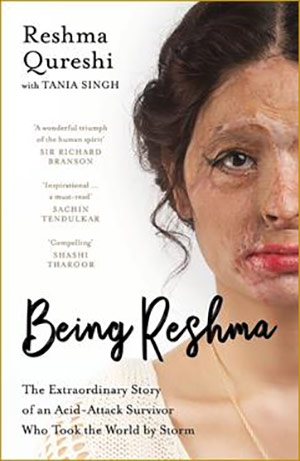 I was supposed to be in New York for around a week, and in that week, I was repeatedly surprised to find such immense kindness in people.

From the moment I landed here, I began to notice how much people smiled, even at total strangers. This was highly refreshing.

I felt normal, and more importantly, I felt attractive. We left the airport and got into a car that smelled like lavenders. The leather seats were so cosy.

I fell in love with the local taxis. The roads were clean and there was little traffic.

Ria laughed and said that the cab drivers believed this to be traffic.

'Tell them to come to India,' I said. I started to miss my family.

I know they would have loved to see New York.

We reached the Carlton Hotel where we were going to stay in one of the suites. Ria had already checked in for both of us.

As we rode up the elevator, I was stunned by the lavish, luxurious interiors.

I entered my suite and gasped. The large windows overlooked the city of New York.

I could see people, all kinds of people, walking faster than I had ever seen people walk in Mumbai. The buildings sparkled under the sun.

I was too tired to eat and we fell asleep.

I was supposed to be in New York until 12 September.

Ria had told me that a documentary crew would be following us around through my entire stay. The next morning, we woke up early.

The documentary crew arrived at the suite and Ria introduced me to everyone. The crew had members from Europe and America.

The director, Livia Alcalde, was renowned for her beautiful imagery, and had won numerous awards at the Global Music Awards, the European Film Festival, the International Film Festival, among others, and the Director of Photography, Greg Harriott, was an Emmy Award-winning cinematographer.

The team was also graced by the brilliant assistant director Alejandro Cortés, and the incredibly efficient producer Chiara Nardone.

Ria had also invited a friend, Anaaya Udhas, to help us during the next few days.

I was jet-lagged, but we did not have a moment to spare. The fashion show was to take place on 8 September 2016. Pre-show appointments for interviews were lined up all through 7 September.

The documentary crew filmed me getting dressed for B-rolls and took some interviews until around lunchtime. After lunch, we set up for pre-show interviews with the media. The schedule was intense.

Ria acted as my translator, and by the end of the day we were both exhausted and fell into a deep sleep.

I don't think I ate anything except for some fruits the whole day. The following morning, I woke up around 7.

I was on edge, bursts of anxiety resulting in shaking hands and restless toes.

What I am about to say probably won't make sense to some of my readers, but that morning I almost feared what lay ahead.

I knew walking the runway was not just simply that, it wasn't just about fashion; it was the beginning of a global mission to change how certain people were perceived.

Today wasn't simply about a statement on acid attacks; we were going to redefine how people should be judged.

I already knew that parts of the media would sensationalize the walk and that the real battle was only just beginning. An acid attack in itself is vicious, but what follows is a toxic barrage of stereotypes, pity, and discrimination.

The documentary crew met us again at our suite in the morning. Ria and I made our way to the venue along with them.

We stepped into the green room and Ria and I looked at each, stunned. Extreme stress was flying all around.

Each model was being attended to by at least four hair and make-up professionals, organizers were barking orders into cell phones and walkie-talkies, photographers, videographers, and journalists were recording every minute of every activity, and while we were busy assessing the stress of the situation, my documentary team had already set up their cameras and were recording my reactions! 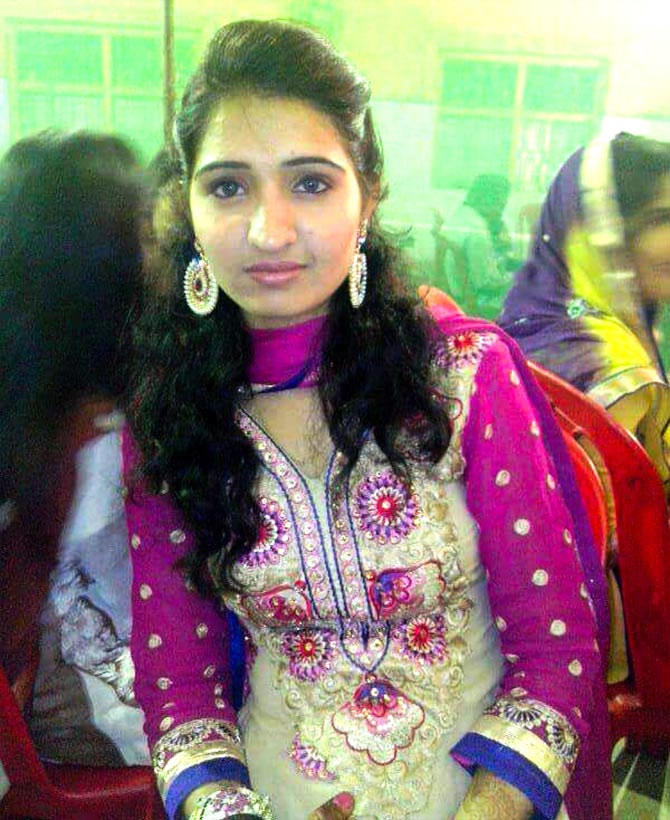 IMAGE: A pic of Reshma before the acid attack.

I had never seen such busy people in my life, not even in hospitals! Things were moving faster than I could breathe.

Many people believe that fashion is superficial, but in my experience, it is one of the most cut-throat, competitive, and dynamic industries to be in. I was shown to a chair.

A producer went up to Ria and gave her quick instructions before walking away.

'You will be trying on a few outfits to see which one fits you best. There will be two shows. One in a few hours, and one in the evening. You will have to get your hair and make-up done after the outfit is finalized. I've told them to be careful with your face and eyes. Interviews between shows and during hair and make-up as well.'

'When will I breathe?' I asked.

Ria laughed loudly and translated my joke to everyone present.

No one else seemed to find it funny and Ria and I exchanged embarrassed, amused expressions.

I was shown to a changing room where I tried on three outfits. At last, I was given a beautiful white fish-cut, floor-length gown with full sleeves and intricate embroidery.

I had never worn anything this beautiful before. I then made my way towards the hair and make-up section. Photographers kept flocking in my direction, hoping to capture a striking image of the world’s first acid-attack survivor to walk the New York Fashion Week. Which they did.

One of these photos later made its way to the cover of Newsweek magazine in the Middle East.

As I was getting my hair and make-up done, I was thrilled to see Sunny Leone opposite me, also getting ready for the show! She was to walk the ramp with me!

At some point, she walked over to say hi. I was so nervous I could barely greet her back. She hugged me and called me an inspiration.

This was the first time someone I admired had called me an inspiration. I hugged her right back. She is an open book, warm and friendly, and I felt so comfortable around her.

A few months later I would meet my idol, Shah Rukh Khan, along with Ria, Tania, and some other survivors: Basanti, Mamta, and Sapna. He, too, called me an inspiration.

From watching the people I admired on television screens, I had come to stand next to them, brush shoulders with them. Destiny is bittersweet, cruel and kind; it leaves you no clues about the path that you will one day take with effortless ease.

You figure it out on your own, and later, you can look back and connect the dots, but in our present moment, who can tell what destiny has in store for us?

I had never walked the runway before, and for fifteen minutes, a choreographer guided me down the ramp and taught me how to pace my walk, when to stop and turn, and where to stop for good photographs.

Fifteen minutes was hardly anything and I felt nervous. Soon, we were all asked to remain quiet backstage as the show had finally started.

Music was pumping through the doors, the models were all standing in order, and I continued to hold Ria’s hand.

'Don't worry,' she whispered. 'I'll be standing on the other side when you exit.' 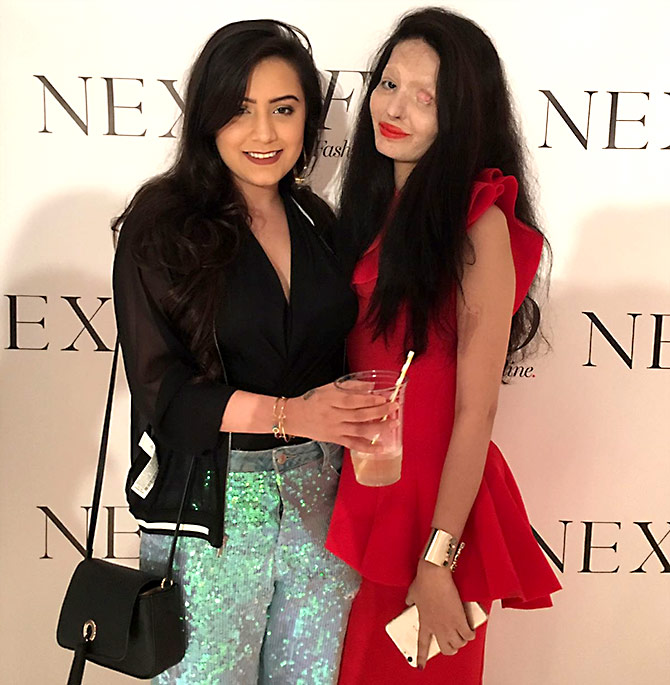 It was my turn. The choreographer gave me the green light to start moving. My heart was pounding, but there was no time to stop and think.

I took a deep breath, remembered why I was there, and stepped up on the ramp. It was over before it started.

All that nervousness faded away and was replaced with flashing lights, thunderous applause, and a deep sense of pride and fulfillment. I got off the stage, my eyes fixed on Ria. We hugged.

We didn't say a word to each other but we both knew that the real battle had just started.

#TakeBeautyBack was now trending on Twitter, and the next morning I woke up to find my face splashed across the New York Times and the New York Post.

Ria immediately went online and the documentary crew filmed my reaction as we gauged the magnitude of the coverage.

Time magazine reported: 'This was not Qureshi’s first time standing up as a survivor of acid attacks. She has been making beauty-advice videos on YouTube, which last year doubled as a public service announcement for an effort in India to stop acid from being available for sale in the open market.’

My debut at the New York Fashion Week made headlines across the globe and was reported extensively by the BBC, Cosmopolitan, the Guardian, Hindustan Times, the Times of India, Daily News, India Today, Buzzfeed, Elle, the Daily Telegraph, People, and many more.

Once again, we had triggered a global conversation, only this time we were not targeting the government so laws could be amended and enforced; we were speaking to the masses and demanding acceptance, to be treated just like everyone else.

Excerpted from Being Reshma: The Extraordinary Story of an Acid-Attack Survivor who Took the World by Storm by Tania Singh, with the permission of the publishers, Macmillan Publications. 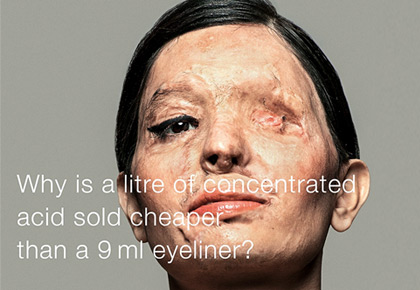