News
Business
Movies
Sports
Cricket
Get Ahead
Money Tips
Shopping
Sign in  |  Create a Rediffmail account
Rediff.com  » Getahead » These teachers are changing the world. Have you heard of them?

A teacher inspires, mentors and shows you the path of righteousness through courage.

On Teacher's Day, here's our humble tribute to the remarkable teachers who have made a significant difference to society. 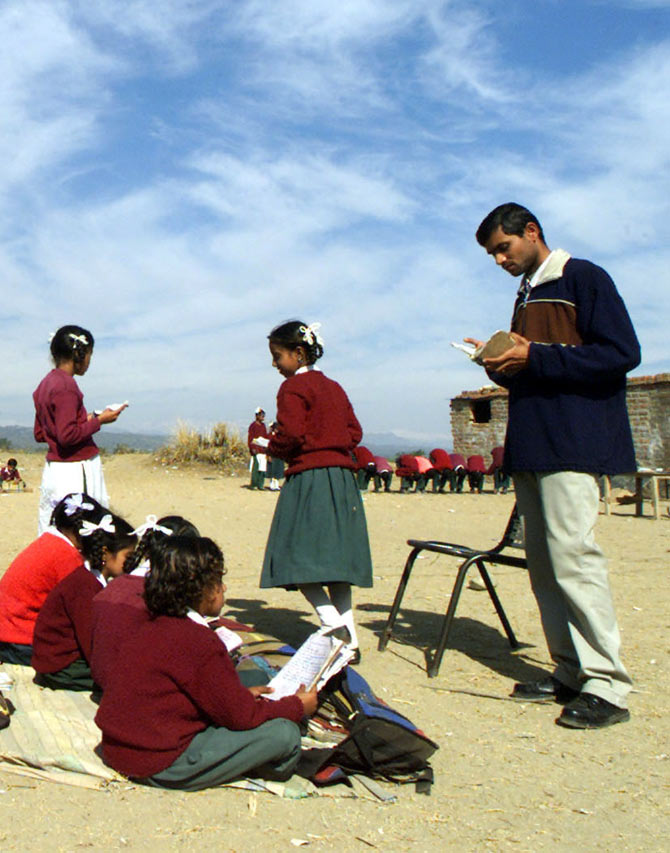 His teacher was Plato, who in turn had been tutored by Socrates.

Aristotle himself was teacher to Alexander, commonly dubbed as history's greatest ruler.

So he knew what he was talking about when he said, "Those who educate children well are more to be honoured than they who produce them; for these only gave them life, those the art of living well."

But William Arthur Ward took this sentiment one step forward when he said, "The mediocre teacher tells. The good teacher explains. The superior teacher demonstrates. The great teacher inspires."

On Teacher's Day we chronicle the stories of such amazing teachers who inspire by example.

Some of them you have perhaps heard of. Others are much more obscure.

But all of them have dedicated their lives to their cause in total abandon.

And in the process have achieved staggering levels of greatness. In the north 24 Parganas district of West Bengal, very close to the international Indo Bangladesh border, lies a small hamlet of a village called Sutia.

All sorts of illegal border activities are rampant here, as are criminal and gang insurgencies.

These are doubly encouraged by the general lack of interest of the law enforcers, given the obscure location of the village.

In fact the local goons thrive from support extended to them by the politicians and police members of the area.

As such the populace has been living in suppressed terror for decades.

But in 2002 the local gang of criminals hit upon an ingenious method to stem any form of dissent whatsoever -- rape.

If any individual refused to tow their line or threatened them with police prosecution, then the women in their family were subjected to this punishment.

If it was a woman who spoke out in the first place, then needless to say, the consequences were even more brutal.

Families could live with murdered kinsmen, but rape violated their honour.

It was the worst possible outcome. And the most effective silencer.

The two masterminds of this plan were Bireswar Dhali and Susanta Chowdhury.

Under their aegis, more than 80 women had been gang raped and many more molested.

Barun Biswas was a soft spoken teacher from Sutia who was attempting to break through this armour of apathy the only way he knew how -- through education.

Legions of students thronged to his classrooms and house every day to hear him speak and be inspired.

Biswas initially wanted to be a civil servant. He had started with social work in college, as a past time. But by the time he was done with his BEd and Master's, this was a way of life for him.

He knew that social activism was what he wanted to do. So even though he cleared his Civil Services Exam, he forged on ahead as a teacher.

When Dhali and Chowdhury’s gang activities got too much to be borne for Sutia, he single-handedly mobilised the terrified town with his passionate speeches and fearless activism.

He filed FIR’s which no one else dared to and got the rapists jailed and prosecuted.

Though he was nearing forty, he refused to take on a wife or start a family because he said that no woman in his family would be safe from the clutches of these monsters.

He formed a movement called the Pratibad Mancha (Stage of Protest) to encourage others to come out and speak.

He spoke eloquently of how silence breeds apathy.

The only way for Sutia to break out of the clutches of evil was for its residents to come out and take a stand. He and his band of students worked tirelessly to protect and promote justice.

Biswas knew that his life was in danger, so he travelled in a crowd always. But he refused to tone down his activism like he had been warned countless times to.

On the night of July 5, 2012 he was waiting for a train at the Gobardanga Railway Station.

Here in full view of the public, he was shot in the back.

He still would have lived had he received medical attention in time. But as lay there on the tracks losing volumes of blood, the goons who shot him threatened anyone who came to help with the same fate.

Biswas tried to use his cell phone to call for help, but was too weak to do so.

In the end, a great burning fire was thus extinguished.

Biswas's sacrifice was not in vain.

Thanks to him India and the world knows about the horrific crime den at Sutia.

The perpetrators are behind bars. And his students, the most invaluable part of his legacy, live on.

In 2013 a movie based on life, titled Proloy (Destruction), was released by Venkatesh Films.

It has gone a long way in telling the story of one of the greatest men that ever lived- Barun Biswas.

By the time he was nine Ali had realised that education was his passion.

But the sad state of literacy and indifferent attitude to learning in the tiny little village in West Bengal that he hails from greatly disturbed the little boy's mind.

He decided to do something about it.

Born in a poor family himself he had no money and no other resources, other than his conviction, which could aid him in upholding his ideals.

Armed with only that he set up a school where children from the village could come and learn to their heart's content.

No fees were charged and he did his best to supply them with books and other necessities.

There was no money for salary to be paid to teachers.

So Ali and his friends studied during the day and taught the other children in the evenings.

Today, the school has been in existence for quite a number of years and boasts of about 800 students.

There are five teachers, all aged between thirteen and eighteen, and are students themselves.

The government promised to sponsor the midday meal of the students but mostly he has to depend on private donations to keep matters afloat.

It has been a struggle so far but the endeavour has had its rewards.

At 16, Babar Ali became the youngest principal in the world.

It was indeed a hefty honor and a heavy responsibility. But, most importantly it was a worthy legacy.

Since then he has given a Ted Talk and spoken extensively about his endeavours on various platforms.

He is currently 22 and in college.

In the evenings of course he does what he has been doing for the past eight years -- teaching students in his parent's backyard.

Those who declared Babar Ali to be the world's youngest principal did not know about the existence of little wonder Bharti Kumari.

Kumari is now 16 years old and lives in Bihar. She became a principal at the age of twelve!

Bharti Kumari walks two miles to school every day and then passes on the knowledge to fifty village kids, ranging from ages four to ten.

She teaches them Hindi, English and mathematics.

Just like the pupils of Babar Ali, these poverty stricken kids would have had no access to education, had it not been for their industrious little headmistress.

Bharti herself had a rough entry into the world when she was abandoned as an infant at a railway station in Bihar.

But her adoptive father is proud of her.

Although extremely poor himself, he encourages both her own schooling and teaching and has made it clear that he won't be pushing his daughter into early marriage which is otherwise the norm in Bihar.

Living in the poorest state in India and in a land ruthlessly ravaged by Maoists, the little hero is aware of the dangers threatening to disrupt her noble cause.

"How will we get educated if we get scared?" is her response to questions about her fearlessness.

She has decided that she will be dedicating her life to teaching.

With education as her passion and knowledge as her weapon, she is surging ahead to make her homeland a better place to live.

Evandro Joao Silva was a Brazilian teacher who helped poor boys escape the poverty and violence of their lives through music.

He and his students would play music to raise money for charity that treated sick children for free.

On October 18, 2009 Silva was mugged and shot to death by robbers in Rio de Janeiro.

CCTV footage revealed that two police officers were patrolling the area when Silva was shot, but they didn't intervene, thinking him to be a homeless man.

An image of Silva's devoted student Diego Frazao Torquato playing the violin (originally featured in the Brazilian newspaper O Globo) at his beloved teacher's funeral became a heart warming memory of a student's tribute to his mentor.

Like so many others of his ilk, Silva had helped Torquato escape his violent impoverished crime ridden environment with music.

Diego had contracted pneumonia and meningitis at age four.

Consequently, he grappled throughout his childhood with memory and motor impairments.

Despite this, encouraged by Silva, he managed to learn the violin.

Born and raised in the slums of Parada, Diego hoped the violin would help him see the world.

Sadly, a year after Silva's death, Diego died of leukaemia.

At his funeral Diego's friend said, "I think the legacy of Diego is hope, it is the willingness to change, to transform." That legacy was Silva's gift to Diego.

ALSO READ: 7 things you should never tell a teacher 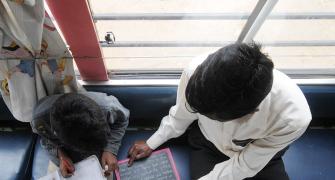 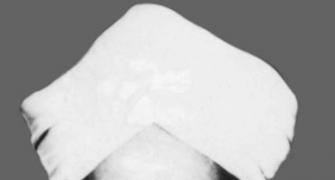 What would you like to tell your favourite teacher? 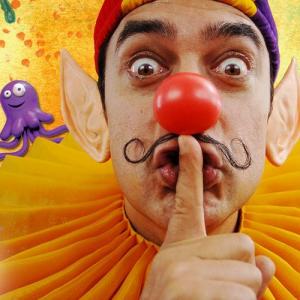