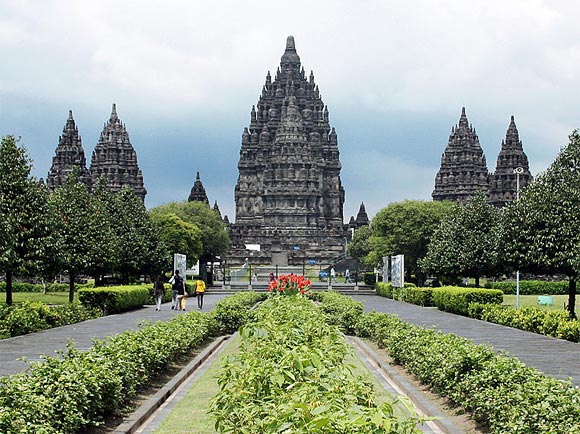 To mark the festival of Maha Shivratri, here's a list of temples dedicated to Lord Siva in various parts of the world.

When I began writing, I was almost sure that I would not find enough Shiva Temples outside India to write about.

How wrong I was.

Lord Shiva is present everywhere and the innumerable temples dedicated to Him across the world confirms this belief.

This temple, built by Rakai Pikatan of Mataram Kingdom in the 9th century, is not only one of the largest temples in SE Asia but is also the largest Hindu temple in Indonesia.

The name 'Prambanan' comes from the word 'Para Brahman' which in Javanese stands for the 'supreme brahmin'.

The temple is dedicated to Brahma, Vishnu and Shiva.

It has a 47metre high building in the centre of a large complex and houses many individual temples.

Originally, there were 240 such temples but many are in ruins now.

The temple dedicated to Lord Shiva is located in the innermost section of the compound and is the largest structure. 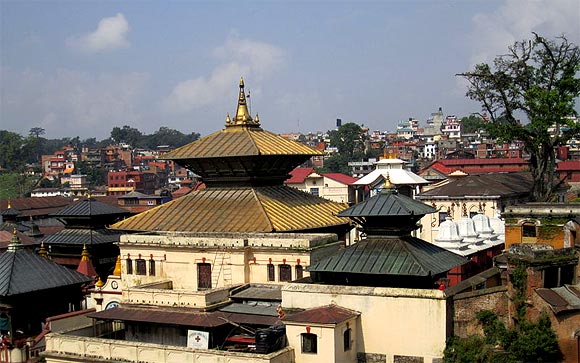 Pashupathinath means Lord of the Animals.

Chronicles reveal that it was constructed in by Jayadeva 11 way back in 753 AD.

Reconstruction of the temple happened around the17th century due to enormous damages caused by termites.

Inside the temple is a meter high lingam that has four faces.

Despite being a Hindu temple, its uniqueness lies in the fact that it a Nepalese pagoda style architecture wherein sloping roofs made of cooper with gold covering rest on wooden rafters.

It has four entrance doors all of which are covered in silver sheets. 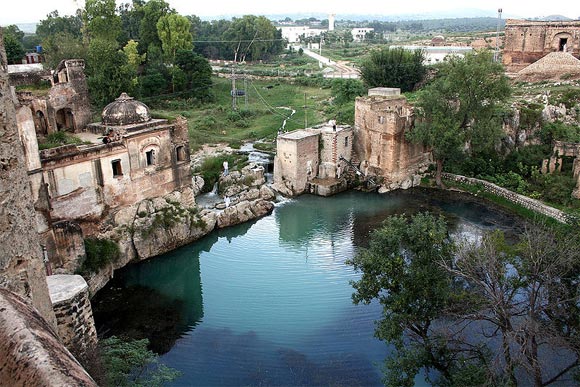 This temple located in the Chakwal district of Punjab near Lahore in Pakistan is to have been in existence since the days of the Mahabharata.

The Pandava brothers is said to have taken refuge here during their days of exile.

Legend has it that when Lord Shiva's wife, Sati, dies He cried so much that two pools were created.

One is located in Pushkar and the other was formed here.

It houses seven temples of which the temple dedicated to Lord Shiva has been built on a square platform and the entrance has a recessed round arch.

The temple complex also has a sacred pool for bathing. However since 2012 this has been drying up due to excessive use of the ground water for industrial purposes. 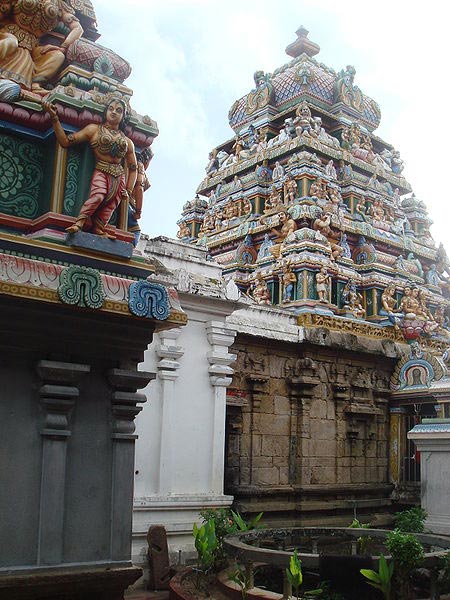 This temple is said to have been in existence since the days to the Ramayana.

It is said that Lord Ram prayed to Lord Shiva here after he won against Ravana.

It is a temple complex comprising of five temples.

Of these the one dedicated to Lord Shiva is the central and the biggest one.

This temple has been destroyed twice in the past by the Portuguese before it was finally handed over to the Jesuits who rebuilt it.

This temple celebrates Shivratri and Navratri with a lot of grandeur. 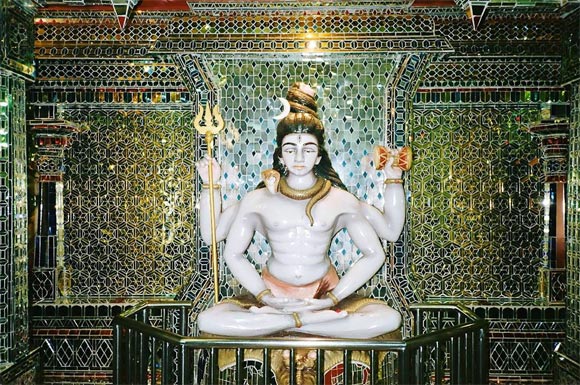 Constructed in 1922, this is one of the oldest temples located in Johor Baru.

The land on which the temple stands was bequeathed to the Indians by the Sultan of Johore.

Initially it resembled only a hut but over the years it has grown to become a grand one.

The most unique aspect of this temple is its creative, intricate and neat glass work.

As for the sanctum that houses the deity of Lord Shiva, over 3, 00,000 Rudraksha beads have been pasted onto the wall.

Some of the other Shiva temples in Asia are:

However this was destroyed in 2008 by what the police had then confirmed as a 'fire set on purpose'. It was one of the oldest Hindu temples to have been built in Nadi (Fiji) way back in 1905. Since its destruction the Sri Siva Subrmaniya Temple built in 1926 and again redesigned in 1986 has become an important place for Hindu worshippers. The 13th and the last Jyothirlinga was gifted to Australia in 1999 by the then King of Nepal -- the late Birendra Bir Bikram Shah Dev.

Together with this was gifted 7996 hymns arranged in eight volumes especially to be sung in praise of this deity.

According to the scriptures, construction of this lingam had to be in the southern hemisphere which symbolised the 'mouth of the snake', the snake being like an ornament around Lord Shiva's neck. Hence Australia was chosen.

This temple's foundation was laid on Shivratri in 1999 in Minto -- Sydney's suburb.

Its uniqueness lies in the fact that it is the only cave temple to have been constructed by man.

Together with the 13th Jyotirlinga, the temple also houses the replicas of the other 12 Jyotirlingas.

In all, the temple complex has 1128 smaller temples all of which are related to Lord Shiva.

Inside the main sanctum is a 10metre deep vault where there are two million notes written by hand saying 'Om Namah Shivaya' from devotees. 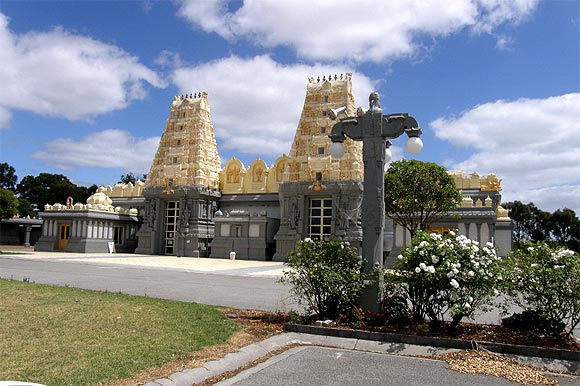 This land was chosen as per the shastras which say that in order to build a Shiva temple it must be a virgin land.

The first puja was performed in early 1986 following which the construction of the two primary shrines dedicated to Lord Shiva and Vishnu began in 1987.

Since then, after years of planning by the Hindu Society of Victoria and the hard work of a team of skilled craftsmen from India, the Shiva Vishnu Temple at Carrum Downs was opened to devotees in 1994.

For the opening ten priests from Kanchipuram and Sri Lanka were called to perform pujas.

This temple's architecture is the combination of Hindu and Australian traditions.

Very recently in 2012 its Cultural Centre was also completed.

Within the temple around 32 deities are worshipped based on elaborate rituals and Indian festivals like Holi and Diwali is also celebrated with a lot of grandeur.

The temple also helps in the development of the youth through its well maintained library and spiritual classes. 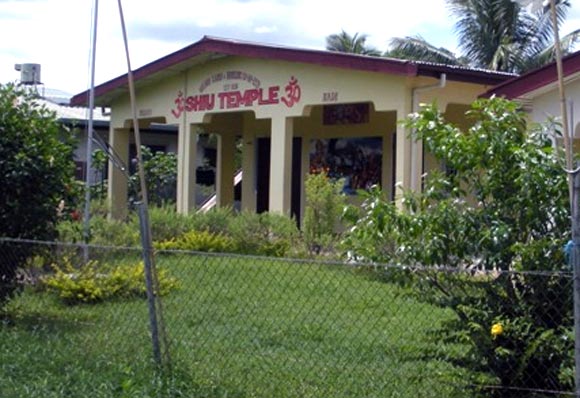 The establishment of this temple in New Zealand not only promotes the appreciation of the Sanatan Dharma amongst the devotees but also acts as a centre for advancement for the youth by providing free Hindi classes every Sunday.

This temple was born in 1998 after a plot of land was purchased by the Sanatan Shivarchan Trust.

This temple was constructed according to the Hindu scriptures under the guidance of Acharya Maha Mandleshwar Swami Shivendra Puriji Maharaj or Yagya Baba as he is called in India.

The deity of Lord Shiva in this temple is in the form of Navdeshwar shivling.

The temple remains open from 8 am till noon and again in the evenings from 5 pm to 7.30pm. 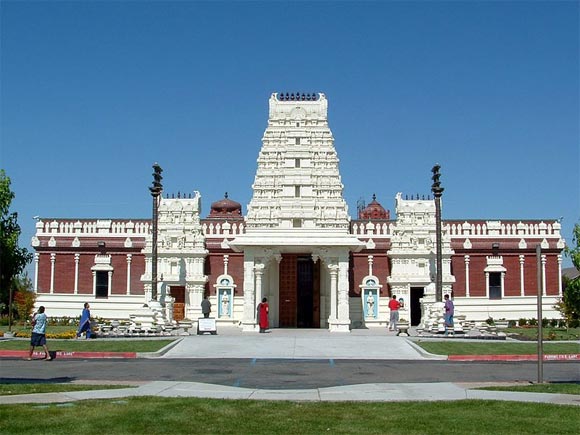 It is one of the biggest Hindu temples in the Bay Area.

With respect to architecture, this temple incorporates the best of both North and South Indian Hindu temples.

Once you enter the temple you will notice deities of innumerable Gods and Goddesses -- Shiva, Ganesha, Durga, Aiyappa, Lakshmi etc.

Most of the idols were donated by the Tamil Nadu government in 1985.

The main gopuram of the temple was completed in 1992.

The courtyard within the temple complex is neat and clean and the atmosphere here is tranquil. The temple also serves Prasad to all its devotees.

Some of the other Shiva temples in the USA are: 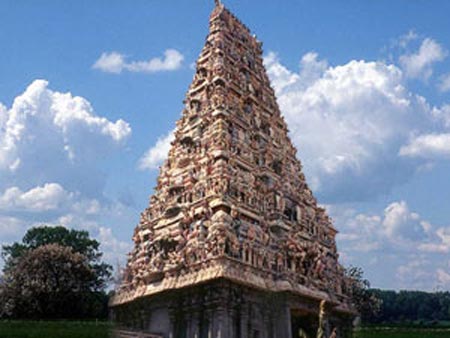 This is a small temple that is located on the first floor of a building. However it is clean and quite well maintained.

Deities in 'garba griha' behind the Shiva Lingam are Nataraja and Shakthi. Statues of two Nandhis also stand beside that of Lord Shiva.

The temple is open for prayers from 7 pm to 9 pm on Tuesdays, Fridays and Sundays.

Shivratri is celebrated here with a lot of geity.

This temple is on the third stop once you get bus number 74 from Bucheggplatz. 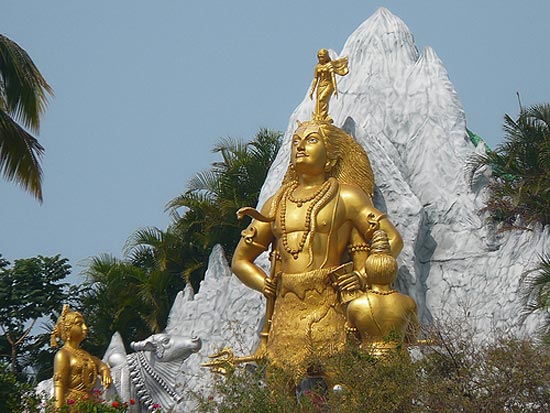 This is a very recent creation that opened its doors for the devotees on June 4, 2011.

This temple has the deities of Lord Shiva together with Lord Ganesha, Goddess Durga, Haumanji and the likes.

The deity of Lord Shiva is in the form of a Panch Mukhi Shivling and is kept at the core of the temple.

It also has a langar hall that can hold 150 people and serves langar to the people every Sunday.

Some of the other Shiva temples in Europe are:

Some of the Shiva temples in South Africa are:

For all those reading this feature, if you have visited any or know of any Shiva temples situated outside India then do share with us. We would love to hear from you.