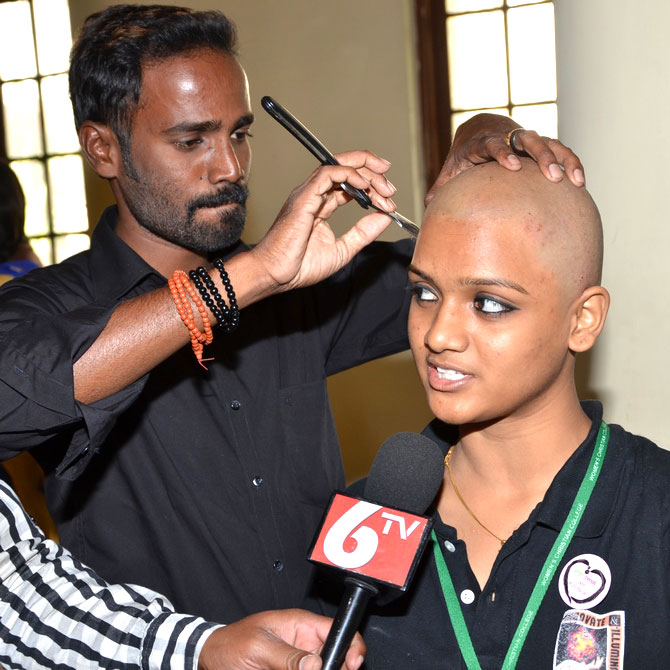 Image: Rennee Saradha shaves it all off for a cause
Photographs: Courtesy Tangled, Haircut for a Cause S Saraswathi

Why would you shave off your head for someone you haven't met and probably don't know of?

It wasn't for fashion; it was for a cause.

Read on why women in Chennai have been donating their hair all of this month.

When something as simple as a bad hair day can make you unsure of yourself, imagine the plight of the millions of cancer patients, who can only watch helplessly as their precious hair falls off in clumps leaving behind ugly bald spots.

For some, the treatment that can save them from the disease is more dreaded than the disease itself because one of the side-effects is hair fall.

"It may sound unbelievable, but there are many, especially youngsters, who prefer to lose their life rather than their hair," says Ramya Ramachandran, the Rotaract Club secretary of the Women's Christian College, Chennai.

The Rotaract Club recently launched Tangled -- an initiative designed to create awareness about the importance of donating hair for cancer patients.

Film producer Siva (of Veeram fame), actor Parthiban, and Mirchi Siva, were among the celebrities present on the occasion.

Ramya Ramachandran (20), a student, along with Rotaract president Rennee Saradha, project chairperson, Sumaiya Fathima and the faculty coordinator, Dr Margaret Mary, are the driving force behind this very innovative initiative.

"Youngsters find it very difficult to accept the loss of their hair. They lose their self-esteem and prefer to forgo chemotherapy because of the fear of its side effects.

Wigs ensure that their body image does not change. It makes them feel better about themselves. It helps them get through this very difficult phase in their life." 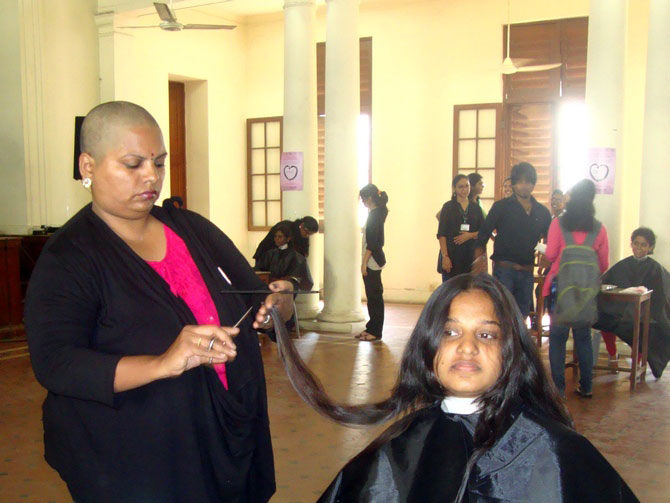 Photographs: Courtesy Tangled, Haircut for a Cause

Sumaiya Fathima, also a psychology student, admits that initially they were unaware of the importance of wigs.

She was part of the team that underwent training at the Adyar Cancer Institute to understand the disease, its treatment and side-effects.

It was at the institute that she learnt how wigs can help improve the quality of life of cancer patients.

"We were stunned by the figures," she says.

"Dr Surendran, psycho oncologist at the ACI explained to us that on an average 100 people in the age group of 16-25 underwent chemotherapy at the Adyar Cancer Institute every month.

"We also learnt that most of those who underwent treatment came from such backgrounds that buying a wig that costs anywhere between Rs 15,000 and Rs 20,000 was totally out of the question."

The project thus aims to create awareness about the problem and to provide wigs to those affected by chemotherapy. The response has been generous

Green Trends, the popular unisex hair and style salon that has branches all across Tamil Nadu, is one of their biggest supporters.

Mr Gopalakrishnan, business head of the salon chain was very receptive to the idea of being part of the project. The salon's stylist was trained to cut the hair in a particular manner.

Since February 4, Green Trends has been actively engaged in the collection of hair. Donors can visit any branch of Green Trends in the city to make their donation. A minimum of eight to 10 inches of hair is required.

Sumaiya herself donated 13 inches of her hair and says that it was a wholly satisfying experience. "If my hair can bring a smile to someone's face, and more importantly, save a life, then it is worth it," she says. 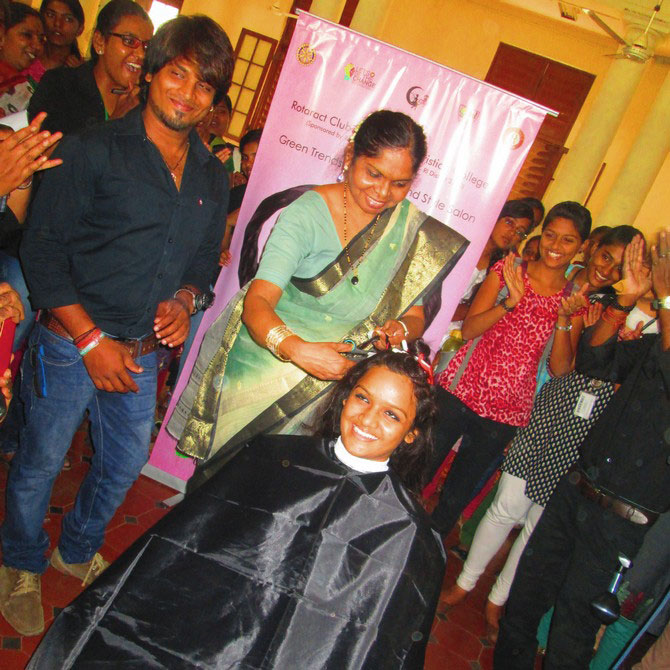 Rennee, the 19-year-old president of the Rotaract club stunned everybody when she tonsured her head for the cause. The project has been her baby since its inception in June last year.

Rennee says that the project has been inspired by 'Locks of Love', a US based NGO that has been accepting hair donations to make wigs for underprivileged children for over 15 years now.

"Every year as part of the community service Avenue of the Rotaract Club, we have to conceptualise and work on a specific project to earn credits.

Her sister Monika (17) came across Locks of Love and it got Rennee thinking.

"A project of this kind has never been attempted before, at least by students.

"We had several meetings, collected all the vital information about what was required from the Adiya Cancer Institute, and got the approval from the college."

The decision to tonsure her head was not a difficult one, she said.

"I felt bliss while donating and have no regrets because hundreds of good souls have rendered their tresses for our project.

"All that we can think about right now is to make the wigs as soon as possible to crown those warriors.

"It has been a collective effort and there are so many people who have extended their wholehearted support and invaluable assistance towards this cause."

The donation drive was to be held between February 4 and 14, but seeing the response, Green Trends has decided to extend the deadline to the end of the month.

Dr Margaret Mary, the faculty coordinator of the Club, says that the project has taken many months of hard work by the students.

"The first phase was creating awareness. The students visited schools, colleges and corporate houses to explain the growing need for wigs and the importance of hair donation.

"We are now in the second phase with the hair donation drive in full swing. The third phase will be the making and distribution of the wigs," explains Dr Waller.

She says Rennee's donation was a huge inspiration.

On the inaugural day there were 148 donations from students, faculty, as well as parents. Two other girls also tonsured their heads.

"By the end of the first week, we had over 800 donations.

"There have been students who have taken their entire family along with them to donate hair -- moms, aunts, friends, friends of friends.

"It is heartening to see so many people coming forward for a good cause," says Dr Waller.

"The hair donation drive has undoubtedly been a huge success, but the most challenging phase of our work begins now," Sumaiya says. 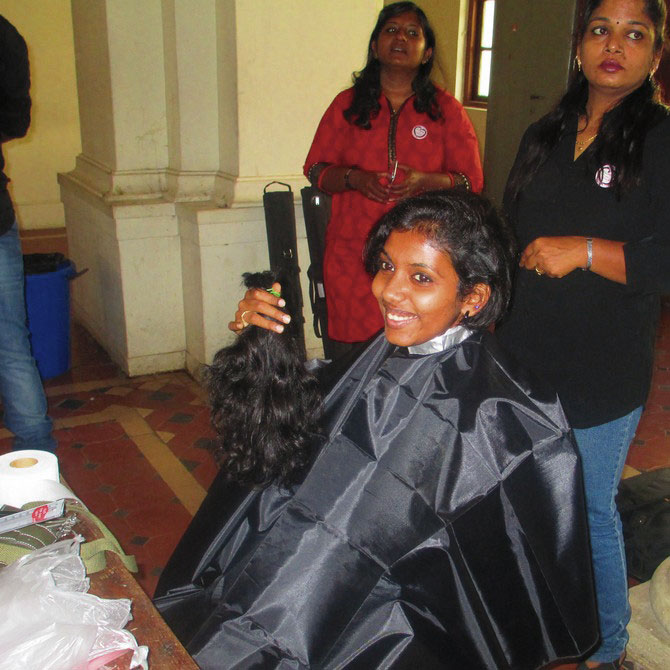 Image: Ramya Ramachandran holds up her contribution
Photographs: Courtesy Tangled, Haircut for a Cause

All the collected hair now has to be stored.

George B Cherian of Raj Hair, a Rotarian and chief exporter of hair wigs in India, has offered his help with the wig making.

"Our goal of making 200 wigs will require about Rs nine lakh. Mr Cherian has agreed to sponsor some of the wigs and so have several other Rotarians and Club members.

"A lot more is required and we would very much appreciate all the help and support we can get," Sumaiya says.

Rennee is confident that things will fall in place.

She says work on the initial set of wigs will start soon with the money collected so far.

Women and children are first in line for the donated wigs.

Measurements have to be taken and the wigs made according to individual specifications.

The plan is to start distributing the wigs by the end of March.

"It may not be a cure, but if it helps to restore some kind of normality to their everyday life, then I would consider this project a huge success," Rennee says.