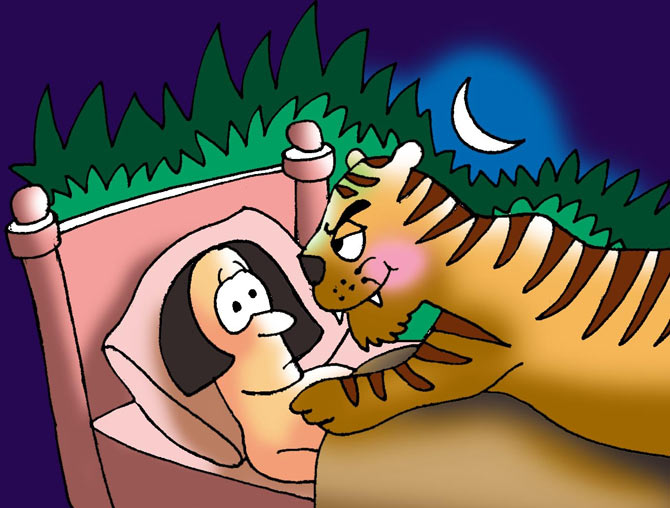 In her next entry, Divya Nair shares what she learned from her interaction with a gynaecologist. Illustration by Uttam Ghosh.

Today, I am going to write about the fears and anxieties I am sure every girl goes through at some point in her life.

Some of these fears she would discuss with her best friends, for others she may rely on so-called expert columns and reference material (read videos) available online.

But most of it is best learnt through experience and one’s own mistakes.

My earliest introduction to sex education was when I was in the seventh grade at school and although it helped debunk a lot of myths, it left a lot of questions unanswered.

The girls and boys were separated and put in different rooms. Although we never found out what was discussed in the guys’ class, in the girl’s room, representatives from a leading sanitary napkin brand told us how the napkins soaked liquid and how we were supposed to use it.

We were each given a colourful book where we first learnt the meaning of the word ‘adolescence’ and how the female body undergoes changes, both physical and psychological.

Before any of us could ask any questions or seek clarifications, the class teacher interrupted the session. She wound it up by telling us that after puberty, girls have to be careful while interacting with guys.

This was advice I got from my parents, elders and senior cousins, without being told why.

Although the session was aimed at educating us about sex and human anatomy, no one told us the meaning of sexual intercourse, or explained the process, or its after effects, a piece of information that is crucial to every adolescent girl and boy.

With just a month left for my marriage and too much (mis) information floating around in my head, I thought it was appropriate for me to meet an expert to understand and debunk the myths about menstrual cycle, contraception, pain during pregnancy and of course, infections.

For the benefit of brides-to-be like myself, I am sharing with you excerpts from my interaction with gynaecologist Dr Kiran Coelho, consultant, LilavatiHospital, Mumbai.

There are four important things a bride-to-be must know. One of them is about the menstrual cycle.

Even two weeks before their date of marriage, girls come to me asking me to help them pre-pone or postpone their menstrual cycle because they have to take part in some ritual.

I’d like to tell them that if possible, avoid disturbing the natural cycle because it could eventually disrupt your subsequent periods.

But in the event that you have no option but to alter your menstrual cycle, always postpone it rather than pre-pone.

If you pre-pone, you might start getting periods twice a month, which is risky and not advisable.

Another reason not to disturb your cycle is that most tablets are progesterone intensive and cause bloating. If your aim is to look thin on your wedding day, you may end up gaining a few kilos because of these tablets.

In the first few months of marriage, you will have plenty of rituals to attend, so you may want to alter your cycle more often. Popping a pill may be a temporary solution, but frequent use of these tablets might trigger polycystic ovarian syndrome – a condition that affects fertility in women.

Contraception – the W and H of it!

The second thing I want to talk to young brides about is contraception and why it is essential to plan the first baby on time.

Contraception is essential because every couple wants to postpone their first child for some time so that they can enjoy married life.

Technically speaking, the ideal age for a woman to deliver a child is between 18 and 25 years.

Considering the fact that an increasing number of girls are prioritising their career goals, the average age of marriage for girls has increased from 21 to 25 years.

Ideally, a woman should have her first baby before the age of 30. After 30, that is from the age of 30 to 35, ovulation begins to become rarer -- the female eggs start to age and there are chances of developing fibroids (a type of tumour).

In women who conceive after the age of 35, there is an equal chance of abnormal foetuses, kids being born with Downs Syndrome and several other complications.

So, if you are getting married in your 30s, it would be advisable not to wait for more than six months before conceiving.

Is there a solution? Of course there is!

Women who get married late (after the age of 30) and want to delay childbirth can go for an Anti-Mullerian Hormone test.

This test tells you about the quality of eggs, the ovarian reserve and how safe or risky it is to delay the process of childbearing.

Speaking of planning and delaying pregnancy, there are two types of contraception available -- oral and barrier.

Oral contraception comprises creams, patches, pills and vaginal rings for women. For men there are male condoms, and spermicidal creams and gels, both of which restrict the male sperms from entering the female egg.

Patches (strips of sticky paper that releases synthetic oestrogen and progestin hormones that help prevent pregnancy) are unfortunately not available in India because of the climatic conditions here.

Oral contraception is by far the most advisable method because it is healthy, helps regulate the menstrual cycle, and its failure rate is 0.01 per cent.

An increasing number of third generation oral contraceptives available in the market today are patient friendly and have minimal to negligible side effects.

The barrier method is inapplicable to young couples because it involves inserting an intrauterine device like copper-T into the body, which is usually done after the birth of the first child.

But there is a possibility that with time, the metal will rupture inside the body, causing severe complications like allergies, cramps and bleeding in varying degrees. The failure rate in this method is six per cent.

Heard of fear of intercourse?

In India, among married couples, between two to five per cent of females suffer from vaginismus – a condition where the pelvic floor muscles involuntarily tighten out of fear or refrain.

At the same time, an equal number of men suffer from erectile dysfunction – a condition where the male is unable to sustain an erection.

Both these conditions hamper a young couple’s sex life. The fear could be due to anxiety, lack of information, extreme expectations or due to some untoward incident of molestation in the past.

During such times, it is important that the couple discuss their anxieties and consult an expert.

I’d suggest to both young men and women not to have unrealistic expectations from each other.

Maybe you have read about orgasms in a fantasy novel, but reality can be a lot different. For lovemaking, it is important for the couple to first accept and then respect each others’ concerns.

The greatest myth men have about female virginity is about the intact hymen.

The hymen is a thin membrane in females that is subject to rupture not entirely due to physical intercourse, but also due to sports activities that exert pressure. It would be incorrect to conclude that if a woman’s hymen is ruptured, it is due to intercourse.

Thirty per cent of females, in the first few months of marriage, stand a good chance of developing infections like honeymoon cystitis.

This is usually reported in newly married couples who have frequent intercourse after marriage.

Since the female urinary tract is relatively smaller than that of men, too much of intercourse can cause damage to the tract, causing pain and infections.

If it’s your first time, there are several lubricating gels available in the market that you can try.

If you experience pain, you must report it to a doctor and get it healed before it aggravates. There is nothing to hide or fear about it. It’s a part of life.

Before you get married, during the time of courtship, read as much as you can about the human anatomy and its functioning.

I recommend self-help books such as Ideal Marriage: Its Physiology and Technique by Dr Theodoor Hendrik van de Velde, and The ABCs of Marriage: Building a Solid Foundation for Marital Success by Tim Gustafson.

You can also read my book Creative Love. It includes a special chapter on 101 ways to have sex without intercourse, which a lot of people have thanked me for.

At the end of the day, marriage is about trust, respect and love for each other. For an active marriage and sex life, you need to love your own body for the way it is and feel proud about it.