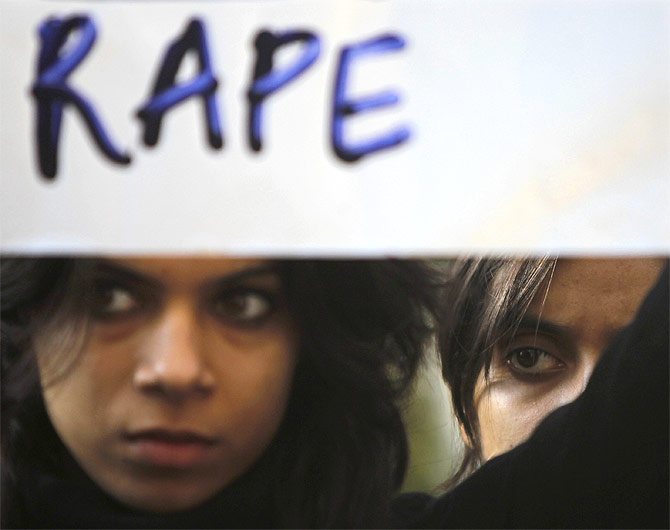 We should be scared, very scared by Samajwadi Party leaders' public statements about sex and rape, says Paloma Sharma.

Mulayam Singh Yadav and Abu Azim Azmi's very public statements (here and here) about sex, rape and punishment were not a case of foot in the mouth.

Either they mistook the interviews they gave for open mic night at Ranjit Restaurant, Bar and Rape Dungeon or they were catering to sections of their loyal vote bank.

Yadav and Azmi knew exactly whom they were speaking to when they made their respective statements, with Yadav claiming that rape is a mistake that bechaare boys make sometimes in the naivety of their youth.

Azmi went on to give a terribly confused interview to a Mid-Day journalist, claiming that women who are 'raped with their consent' (it's called sex, Mr Azmi) deserve to be hung to death.

Yadav also promised to repeal the newly enforced Criminal Law (Amendment) Act, 2013 -- popularly known as the anti-rape law -- if the SP is voted to power.

The statements made by both men cease to shock after hearing RSS chief Mohan Bhagwat's India-Bharat theory of the occurrence of rape, Khap panchayats' chowmein excuse and Mamata Didi's belief that every case of sexual assault under her reign is a Maoist conspiracy.

Politicians and persons of prominence who claim to be 'social leaders' have made it a habit to mouth off against women and in favour of a rigid and oppressive gender hierarchy that hides behind a gold-plated sign that says 'Indian Culture' in bold, capital letters -- in Devanagari, of course.

Netas have known for long what we are beginning to understand only now -- that men control the votes. In urban India a woman's vote might be her own but the liberty of voting as per one's wishes is not a luxury every woman -- or even man -- can afford.

Documentaries such as Nishtha Jain's Gulabi Gang and Neha Dixit's Misogynists of Mewar show how predominantly upper caste men -- usually the chiefs or panchayat members of the village -- control an entire community's votes.

If the village chief, the community head, the religious leader is appeased, votes will swing a certain way.

And repealing the anti-rape law is a form of appeasement.

As Shobha De pointed out in a recent column in The Asian Age, "Rape is a political perk".

A patriarchal system is obsessed with controlling women's bodies.

Sexual assault is all about power and rape is a way of establishing dominance -- it has absolutely nothing to do with sexual urges.

However, when a woman takes control of her own sexuality and engages in an intimate relationship with a person of her choice, it threatens the status quo because consent eliminates the power of force and the thrill of dominance.

Azmi went on to justify his recommendation of hanging all partners engaging in pre-marital sex by saying that it is the law according to his religion. The last time I checked, this country was still governed by our Constitution.

If Mr Azmi wishes to live in a country where religious law and the law of the land are the same then perhaps he might like to choose another place to reside in. India is a secular nation and it will remain that way.

As much as we'd like to laugh off the declarations that the distasteful duo have made, we better take them seriously.

Yadav and Azmi are seasoned politicians. Their words were not an act of foolishness -- they actually believe what they say. Moreover, they are voicing a belief that is still ingrained in many sections of their electorate. This will certainly come in handy around election time.

It is also a show of solidarity for those politicians who have been accused of sexual assault -- and there are quite a few. According to this report published in The Guardian, one out of every five candidates contesting elections this time are facing criminal charges.

Yadav's promise to be the saviour of sexual offenders and Azmi's claim that women are equally responsible if they are sexually assaulted, along with the daily doses of misogyny that leak from political podiums week after week, pose a grave threat to the massive wave in support of women's rights and equality that has been rising ever since the brutal gang-rape of 23-year-old physiotherapy student in Delhi.

The new government that comes to power after the elections will have to deal seriously with a situation where systematic violence has been inflicted on women and girls for so long that it has reached the levels of an epidemic.

According to this Al Jazeera article, it is estimated that 60 million women are 'missing' from India's population.

Sex-selection, female infanticide, malnutrition and violence against women are responsible for the 'missing' women.

That's more women than the total population of a small European country.

Right minded women and men must exercise the opportunity this election presents to vote out those who view women as expendable, third-class citizens.

We cannot afford to waste another five years waking up to a new case of horrific sexual assault every single day.

But it is significant that such an important and major issue has not found its way to the centre of any party's election manifesto except as a token mention in some.

Impassioned election speeches do not show any concern for the issue except as a passing mention by the more sophisticated candidates.

As the Al Jazeera article mentioned above put it, most Indians don't even recognise the extent of the problem in their own country.

What worries me most is that if these are the beliefs that the ruling party of Uttar Pradesh enshrines, and maybe other political parties all over India, will there ever be a country for Indian women?