It is true! I HATED my brother 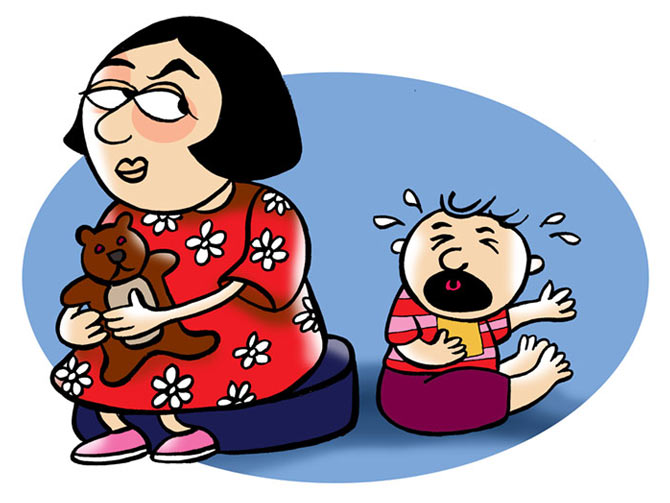 To the world, my younger brother was a bundle of joy – he was fair, looked cute and adorable. To me, he was an intruder – someone with whom I had to now share my gifts, toys and parents.

Ahead of Raksha Bandhan, Divya Nair tells us why it was difficult to find a place for her younger brother in her heart.

My parents believed in 'Hum Do Hamara Ek'.

Papa had lost his parents early on. After marriage, he and Amma had wanted just one kid.

Be it girl or boy, they'd give him/her all the love and attention in the world.

I was born in February 1986 and my Papa leapt with joy, distributed sweets and welcomed visitors with a tireless smile.

He would come home at 4 am tired and sleepy from his night shift and crash in bed, waking up only at noon.

But now that I was there, Papa would take me in his arms and watch me for as long as he could.

Despite his meagre monthly income -- Amma had to quit her job when I was diagnosed with jaundice -- Papa showered me with the choicest of gifts and clothes.

I was pampered and continued to be the centre of my parents’ attention for five long years.

Although my parents ignored it, I was becoming extremely possessive of my belongings.

I hesitated to share my toys or food with other kids in the chawl we lived in.

When someone came home, I'd hide my toys under the bed and make a face if asked to share a chocolate.

I’d cry, fight and throw tantrums if my parents failed to get me something I desired.

Needless to say, my parents were embarrassed with my behaviour in public. Scolding and punishing didn't help.

My maternal grandmother advised them to think about a second child so that I would know what it means to share and care.

When Amma was pregnant, she innocently asked me if I wanted a baby sister or a brother.

I said I wanted a sister because I wanted to play with dolls, and perhaps wear identical clothes, just like they showed in the movies.

As luck would have it, Amma delivered a baby boy.

I was very disappointed and had no qualms expressing it.

The day he was born, I threw the baby napkin on his face and said: This is not my brother.

That was just a part of the cruelty I unleashed on my baby brother.

To the rest of the world, he was a bundle of joy -- just as I had been five years ago.

They loved and cuddled him, told me how he was fair, bubbly and had cute little feet. How could I not love him?

I just could not.

I saw him as an intruder, a strange person who came between my parents' undivided attention for me.

Much to my grandmom's disappointment, I hated to share toys with my brother.

If my friends or relatives tried to tell me that my brother was 'cute' I’d suggest that they adopt him and take him to their home.

The list of cruel things I have done to my brother would perhaps reserve my ticket to hell, but that did not stop me.

When my baby brother was still a few months old, Amma went for a bath and asked me to take care of him.

I used the opportunity to pinch him.

Just so that his cries wouldn’t reach Amma, I rolled him in the mat he was lying on and looked away as if nothing had happened.

Fortunately, Amma sensed something foul and came out and rescued him.

She understood what I had done but did not scold me. She did realise, though, that my brother wasn’t safe in my hands.

This continued for the next few years. When Amma was away, I’d threaten to switch off the cartoon channel and make him cry.

Just before Amma came back, I would wash his face and dab some talcum powder and threaten him not to complain to Amma.

I don’t know why my brother never complained to Amma about me. He would insist on playing with me and sharing his toys with me.

Everyone who knew our family could see how rude and cruel I was, but no one understood what I was going through.

It took me a good six years or so to realise what I had done and to mend my ways.

Perhaps my brother's selfless ways and unconditional love changed me.

When he was six years old, he taught me that he would never let me down.

For days I had been helping him rehearse the lines for a class one fancy dress competition, but on the day, he fumbled.

I was very upset with him because he'd failed me in front of every one.

The next year, he made me proud by bagging the first prize.

The first person he hugged that day was me -- not my Amma, not my Papa.

My eyes filled with tears. Suddenly I felt the elder sister awaken in me like never before.

I felt the responsibility to protect, to encourage and be there for him -- in good and bad times, just like he had been there for me -- tireless, hopeful that some day I'd love him back.

It came a little late in life, but I realised what it meant to have a brother and call him family.

Dear brother, if you are reading this, I hope you forgive me for all the times I failed you as a sister.

I wish you a very happy Raksha Bandhan.

With each growing day, may our bond grow stronger and deeper.

Dear readers, do you have a picture of you with your sibling? You can post them on Rediff ZaraBol -- #Sibling-Photos!

Don't forget to post a message for your sibling along with it and we will publish the most interesting photographs on Rediff.com!

So what are you waiting for?