Sign in  |  Create a Rediffmail account
Rediff.com  » Getahead » 2 States: She asked me never to call her again!

2 States: She asked me never to call her again! 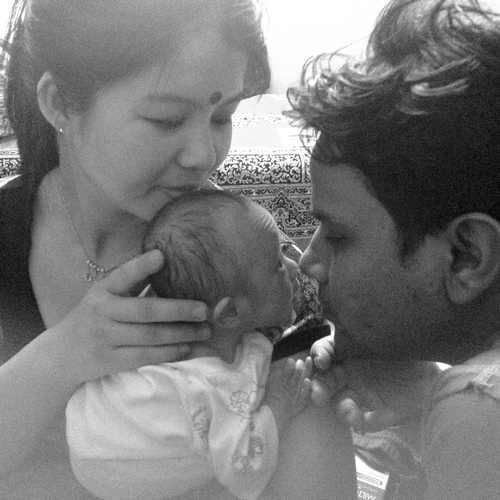 Image: Abhishek Misra with his family

We asked you, our dear readers, to share your 2 States stories with us. Here is Abhishek Misra's story!

I first saw her during my first year of graduation and something told me that she was the one.

Back then, I did not know which state she belonged to but I deduced from her features that she was from the North East.

My admiration for her was a secret that only few friends knew of... till a friend of mine mentioned it to a friend of hers.

A month later, when I called up the girls' hostel to thank some of my friends there for their birthday wishes someone decided to hand the phone to her.

Three years passed and I had all but given up hopes of ever speaking to her again.

In my final year of graduation, some helpful friends managed to get us to talk to each other and on the last day of my graduation… the last 30 minutes out of the four years that I spent at college that I learnt that she loves me too!

Long-distance calls, SMSes, mobile phone conversations in 2004 cost me all my savings and the money I borrowed!

Her parents were absolutely against the idea of us getting married!

After several arguments, requests, threats, pleadings and hours and hours of long distance phone calls, not to mention rock solid support from my siblings, her father was convinced.

We married in February 2011 and are now proud parents of a lovely baby boy who we hope will understand that states and boundaries are just a state of mind!

Are you a north Indian who's married a south Indian or vice versa?

How did you two meet?

How did your families react?

Was there enough drama for a Bollywood movie or a bestselling book? :-)

Email us the stories of your inter-cultural marriage!

Write to getahead@rediff.co.in (Subject line: 'My 2 States story') along with a picture of you and your spouse, and we will publish the best stories right here on Rediff.com!