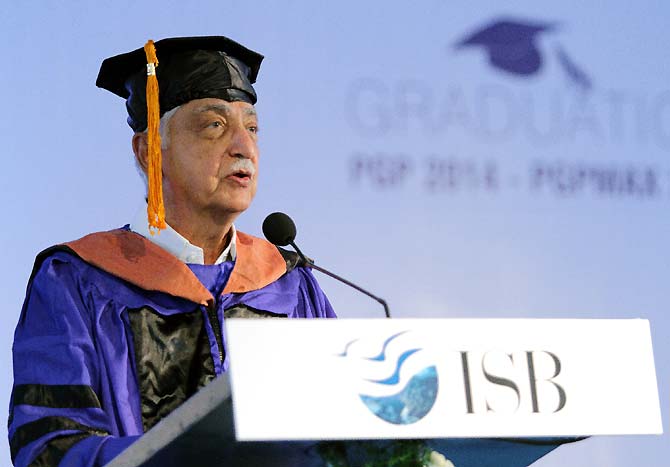 Image: Azim Premji addressing the students of the Indian School of Business in Hyderabad on their Graduation Day.
Photographs: Courtesy isb.edu

All of us here are privileged, some more some less.

I think that privilege gives us not only a responsibility, but the way I see it an opportunity, to help those around us who face inequity, injustice and deprivation.

And I do believe, that if each of us does whatever we can, within our capability, capacity and our constraints, to reach out to even one of our fellow underprivileged citizens, it can make an enormous difference to our country.

Good afternoon. It's a great pleasure to be here with you.

My congratulations to all of you who are graduating today. Let me also congratulate this excellent institute where you have been studying . In the past two decades, very few high quality academic institutions have been built in India, and ISB has definitely proved itself to be amongst the leaders.

Today as I stand here I recall a personal incident from way back pertaining to another excellent business school like this one.

It was in the mid-1970s Wipro was a small company making vegetable oils. We had just begun to diversify into manufacturing soap. I was then about as old as some of you
are today.

I realised early that if Wipro had to grow we had to build a good team. I intuitively knew that strategy and other important issues could be worked out if Wipro had the right people.

At that time that meant the IIM Ahmedabad.

So I set out to recruit from IIM Ahmedabad. You can imagine how presumptuous I must have appeared to the management at the IIM.

I was in my early twenties, running a small business which no one had heard of.

Hindustan Lever, the leader in our product category, and other similar blue chip companies were clearly the places which business school graduates wanted to join.

Lever, then perhaps 100 times our size, did not even know we existed.

Suffice it to say we were not taken seriously. I was not even given a chance to have a dialogue with the students.

That was the first time we tried and we came back empty handed.

But I did not relent and I also did not change what I was saying about the company.

I presented Wipro with absolute candour, which I have continued to do.

We kept trying. We also tried at other good institutions like TISS. We tried at different  campuses, and we also attempted to recruit those who had recently passed out.

After three whole years of trying, we finally succeeded.

It started with a couple of people, and then over a period of time, the trickle became a steady stream.

By the early 1980s, we were being invited to all the top business school campuses for recruitment.

Business school graduates who joined us were given a clear understanding of the company they were joining.

We made sure that they knew exactly what Wipro stood for.

I think it's because of this that most of those who joined us in that period stayed on through their careers.

Many of them played a determining role in shaping Wipro.

The thing about being comfortable with who and what you are, and presenting that with candour, has always stood us in good stead.

In fact now our clients tell us that this is one of the big advantages that they find in dealing with us, vis-a-vis our competitors.

That brings me to my next point. The point is about the critical importance of things that we consider ordinary.

'The drivers of all success are: hard-work, perseverance and basic honesty' 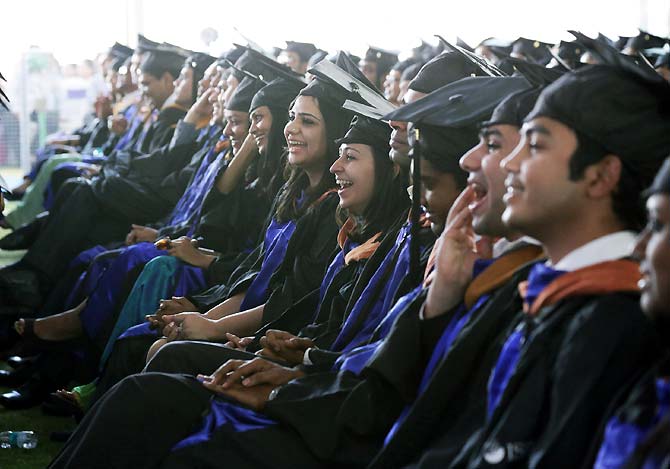 In the world of today, we seem to be caught with the notions of the extraordinary.

What I mean is that we are always thinking of what could be the next big idea, what innovation could be done, how we will stand out and be different and so on.

We seem to getting in to a mode of thinking that success comes from extraordinary things.

My experience suggests that this is quite wrong. Innovation, big-ideas, being different, all have a place -- and sometimes can be very important. However what really builds and sustains success, are the much ignored ordinary things.

The three ordinary things that we often don't pay enough attention to, but which I believe are the drivers of all success are: hard-work, perseverance and basic honesty.

As I look back at the past 30-40 years of Wipro, I can hardly remember any decisive turning point that came from some single big idea or great innovation. Everything was built with steady, painstaking work.

Over the years I have been privileged to have met and worked with some of the most successful people in the world.

What is clearly common to all these people is what I have called the ordinary things.

Many of them have startling brilliance or extraordinary creativity, but these are just flashes.

What makes them what they are, is hard-work, perseverance and basic honesty.

'If we all search towards a common goal with like mind and common purpose, the difference must and will show' 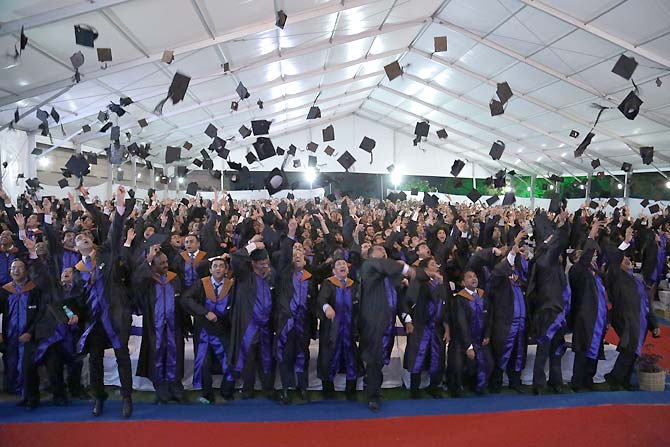 Image: Students of ISB Hyderabad toss their hats in the air on their Graduation Day.
Photographs: Courtesy isb.edu

Recently I visited a place called Surpur, which is about four hours driving distance from here.

Surpur is a block head quarter in Yadgir district in north Karnataka.

The Foundation that I have set up has been working in that area for over eight years.

The main objective of our work is to improve quality and equity in education in our rural government schools, in which our poorest and most disadvantaged children study.

In one of the villages which we visited, the government school had organised a 'baal mela', a children's fair.

Perhaps it was nothing that would impress anyone who goes to one of the more privileged schools in Hyderabad or other urban areas.

But when we remember that this was a small village of marginal farmers, in one of the most backward areas of the country, where most of the children were first generation school goers in their families, it was very gratifying to see.

The sense of excitement was infectious.

The entire village had been involved in organising the fair. There was enormous enthusiasm.

The fair was full of models and charts to explain various concepts in science.

The school teachers were running around busily.

What amazed me was the passion with which the entire village was engaged with the event.

It was an eye opener as to the resilient spirit of our people, which can be sparked with just the little intervention from outside.

From the baal mela, we went to visit another government school where we shared the mid-day-meal with the children.

It was simple and tasty food. This meal is prepared at a budget allocation of Rs 3.40 per child.

While we were eating, I observed that three small children were accompanied by even younger children, who were eating from their plates, the older ones feeding the little ones.

I was told that they were siblings who were too little to be in school.

They came to school because their parents were both out in the fields working as hired labour with no one at home to take care of them, but mostly because that was the only way they could get a half way decent meal in the day.

The school understood the situation and accommodated these young children in the meagre budget that it had.

I cannot think of too many schemes where the taxpayer's rupee has been better spent.

How distant the world of those children eating the Rs 3.40 mid-day-meal seems from the world that awaits you after your graduation, but it is not really. It is very much part of our world and one which we often find it easier not to see.

There is extraordinary inequality, deprivation and injustice all around us, and I think we need to be conscious of this reality, because it is highly intelligent and capable people like you who are key to making our country better.

I don't think this will happen just by each one of us doing their job well. That may be a good place to start, but I think it is necessary to have some genuine social engagement. You may ask why?

I don't have a simple, compelling answer. To me, it seems that all of us here are privileged, some more some less.

I think that privilege gives us not only a responsibility, but the way I see it an opportunity, to help those around us who face inequity, injustice and deprivation.

And I do believe, that if each of us does whatever we can, within our capability, capacity and our constraints, to reach out to even one of our fellow underprivileged citizens, it can make an enormous difference to our country.

Finally, all battles are fought in the mind, and if we all search towards a common goal with like mind and common purpose, the difference must and will show.

Let me end by wishing you all the very best, for a life and career that is fulfilling to you, and also makes this world a better place.