Stress, aches, pains are some of the reasons for sleeplessness today.
Fret not! says Nikita Puri. 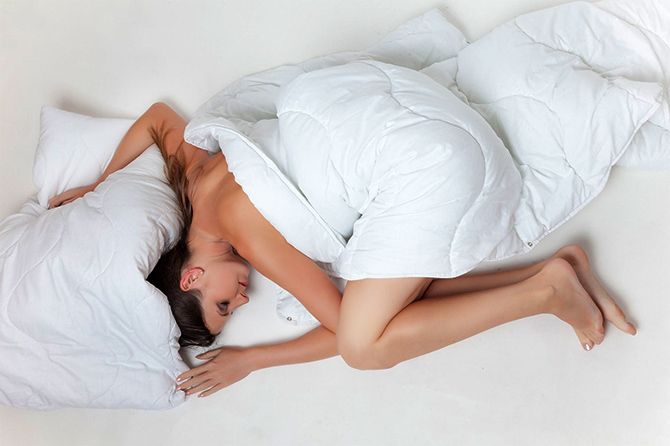 In the Indian context, studies on sleep and sleep deprivation are few and far between. When market research agency Nielsen conducted one in 2010, it found that 93 per cent of urban Indians in the age group of 35 to 65 were sleep deprived.

While a majority of participants in the study felt their work suffered from a lack of sleep, some even said they fell asleep at work.

Seven years later, the scenario has not changed for the better.

Getting a good night's sleep, it seems, isn't as easy as it is made out to be.

Take a quick look around and you'll see the professional who's struggling between work and home, or the student who's cramming up for entrance exams or just Netflixing one TV show after another.

Or the neighbour who can't sleep because of stress and anxiety, or the parent struggling with joint pains or breathing troubles -- there really is no dearth to the number of reasons that crop up when it comes to something as simple as sleeping.

"Sleep is very important for health and well-being, both physical and emotional; sleep is essential for survival itself," says Bindu M Kutty, head of the neurophysiology department, National Institute of Mental Health and Neurosciences, NIMHANS.

"We live in a 24x7 society that is largely sleep-deprived. Most sleep only for five to six hours and that results in a sleep deprivation of one to two hours every day," says Bengaluru-based Dr Kutty.

Ideally, for the body to restore and rejuvenate, we need at least seven to eight hours of sleep daily.

Stress, aches and pains and arthritis are just some of the reasons for sleeplessness and insomnia today.

"Using the right essential oils can help to a great extent in addressing some of these conditions, thus resulting in better sleep," says Rupal Shabnam Tyagi, a Delhi-based aromatherapist. Previously a software professional, Tyagi has been practicing aromatherapy for over a decade.

In cases of hormonal imbalance and cluttering of mind, sandalwood oil does a lot of good, for instance, says Tyagi.

Likewise, lavender and marjoram oil aid in combating sleeplessness, or even when the nervous system hasn't had enough rest.

"When fatigue is the cause of your sleeplessness, clary sage works very well," says Tyagi.

References to aromatherapy, a method that uses essential oils extracted from plants, herbs, trees, flowers healing, can be found in records of older civilisations from India, Egypt, China and Greece.

In 1910, a French chemist named René-Maurice Gattefossé badly burned his hand during an experiment and plunged it into the nearest tub of liquid: A vat of lavender oil.

Gattefossé, who is considered the father of modern aromatherapy, documented how quickly his hand healed without scarring, and went to experiment with essential oils.

In 2012, when Delhi-based Nikki Kapoor's chocolate-coloured dog Duchess lost use of her hind legs owing to arthritis and hip dysplasia, the veterinarian suggested putting her down.

That's when Kapoor stumbled onto aromatherapy while searching for an alternative medicine for Duchess. Five days after massage and aromatherapy sessions, the dog started walking again.

A two-time cancer survivor living with three auto-immune diseases, Kapoor's faith in aromatherapy has only blossomed since.

"Allopathic medicines are a great help, but the long-term side-effects of these aren't to be taken lightly. Starting from the paint on our walls to our hair dyes and the water that we drink, there's so much that goes into our bodies that we are not even aware of. I look at aromatherapy as a holistic way to balance that out," says Kapoor.

While Tyagi's line of aromatherapy blends are available under the brand name of Wikka, Kapoor's line is called Navarasas: Both are available online.

To aid with sleep, one of Kapoor's blends, called Sleepy Time Mist, is a bed and linen spray that has distilled water, clary sage, lavender and frankincense.

"We are often so wired and stressed that the brain doesn't get the time to quieten itself. This combination sends signals to the brain asking it to relax," explains Kapoor.

Aromatherapy works best when you consult an expert and figure out what fragrances are accepted by your mind.

The first step is to identify the reason behind the condition's symptoms, and then identify which oils are likely to work best.

Essential oils are extremely volatile and quick-acting: They enter the bloodstream within seconds of application and course through the body within minutes.

These can be taken via inhalation or massage and they act as free-radical scavengers, thus providing anti-aging benefits.

Every essential oil has an affinity towards a different part of the body.

Eucalyptus is known to help the respiratory system, and peppermint has positive effects on the digestive system. But a do-it-yourself route shouldn't be adopted for specific medical conditions.

"Remember that essential oils are extremely potent and can irritate the skin if not diluted with oil," says Tyagi.

Distilling five to eight tonnes of raw plant material produces just about one litre of the oil, so there are contraindications to bear in mind.

Spice oils, like those made with clove and cinnamon, are best avoided by those who suffer from high blood pressure.

Rosemary, too, helps in increasing blood circulation, so that should also be skipped.

Similarly, floral oils should be avoided during pregnancy since these are uterus-stimulating oils.

Also, there's a vast world of difference between essential oils and fragrances.

"Fragrances, perfumes and mists are easily available and are more affordable than essential oils, but these don't offer the healing benefits that the oils do," says Kapoor.

If allergies keep you from being rested, try chamomile.

If it's stress, opt for lemongrass and bergamot and to de-clutter the mind, go for sandalwood.

There's a therapeutic oil for all of us; one just needs to find the fragrance that can heal their body.