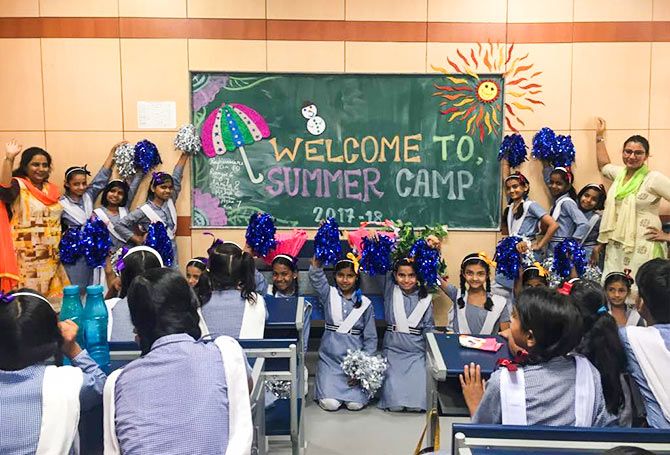 For some time now, educationists and development sector watchdogs have been questioning as to why scholastic outcomes remain poor, in spite of the government's inputs into schools and a countrywide rise in school enrolment rates.

Why is it that the 2016 ASER report still shows that one out of every four Class 8 students can't read texts meant for Class 2?

Saajha, a Delhi-based start-up, has come up with an innovative programme that could offer at the least a partial solution -- it empowers parents to become more involved in school functioning and creating a better learning environment for their children.

Conceived in 2012 by Abhishek Choudhary and Saransh Vaswani, both Gandhi Fellows, and Prashast Srivastava, an Indian Institute of Management-Ahmedabad alumnus, Saajha works directly with parents and communities associated with 82 municipal schools in Delhi.

It trains them to participate and maximise the role of school management committees, or SMCs, mandated by the Right to Education Act, 2009.

Consisting of parents, teachers, social workers and the local MLA, these have since emerged as potent tools for improving school infrastructure and involving the community in the education of their children.

Here's how it does this. IMAGE: Saajha trains parents to start libraries, organise reading melas, volunteer in their children's schools and work towards improving the sanitary conditions in and around the school. Photograph: Kind courtesy Imran Ali/Twitter

Incubated at Pratham, one of India's largest NGOs in the field of education, Saajha's approach is tailored for first generation learners whose parents feel unable to contribute academically or provide an environment conducive to learning.

Srivastava and others train parents to start libraries, organise reading melas, volunteer in their children's schools and work towards improving the sanitary conditions in and around the school.

Seeing their parents and community invested in their education gives students an added impetus to study hard and do well.

For parents too, this involvement is empowering.

"Before our intervention, many parents felt they had no role to play in their child's education," says Srivastava.

In several instances, its interventions have proven to be transformational.

Consider these examples: Mumtaz Begum has started a library for children in her east Delhi neighbourhood after attending a Saajha summer camp.

"I'm illiterate, but want to encourage my children's generation to read books," she says.

Another parent from a south Delhi neighbourhood, Sushma, has been instrumental in getting the municipal authorities to remove the unhygienic food vendors outside her children's school.

"I've also pressured them to clean up the garbage dump outside school," she says.

Shahida Begum, along with other members of her SMC, goes door-to-door to convince dropouts to return to school.

"Recently, to ensure parents came for the parent-teacher meeting to school, I had its date and time announced on the loudspeaker of the neighbourhood mosque," she says. 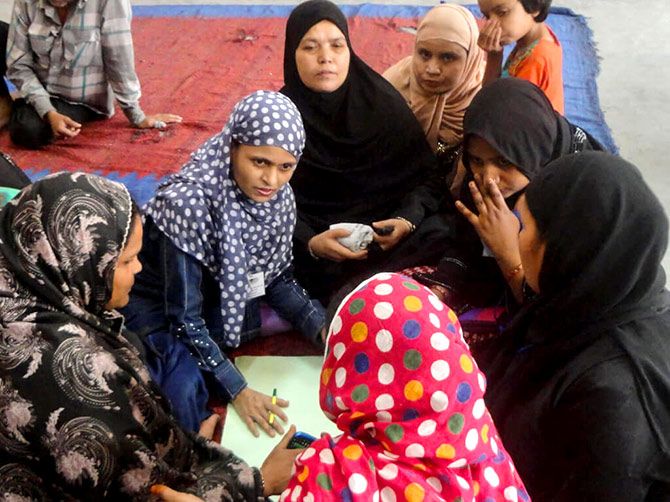 IMAGE: Seeing their parents and community invested in their education gives students an added impetus to study hard and do well. Photograph: Kind courtesy Saajha

On a more macro level, Saajha is working with the State Council for Educational Research and Training to create training modules for SMC members.

Also, in a bid to ensure transparent and easy functioning of the committees, it has developed an app that will put all the activities of SMCs across the state online.

This will give every SMC member access to all the issues discussed and addressed, as well as allow for all the data to be collated and analysed at the macro and micro levels.

Additionally, Saajha organises bi-annual workshops that give SMCs of different schools the chance to interact and share experiences.

Saajha plans to scale up its operations significantly in the near future.

"We are targeting 200 rural and urban schools in the next three years," says Srivastava.

Its donors include the Central Square Foundation, Echoing Green and the Kaivalya Education Foundation.

"We are currently identifying more partners to support the scale-up," says Srivastava.

Meanwhile, Sushma dreams of helping her children's school to become as good as any private school while Mumtaz Begum hopes her daughter will grow up to become a doctor.

As more parents learn to see themselves as potential, and potent, resources in the country's education system, these dreams may be well on their way to becoming a reality.