pTron Bassbuds Lite: Is the right wireless earbuds for you?

It's one of the cheapest options in the market, but is it the one you should buy? Ashish Narsale/Rediff.com finds out. 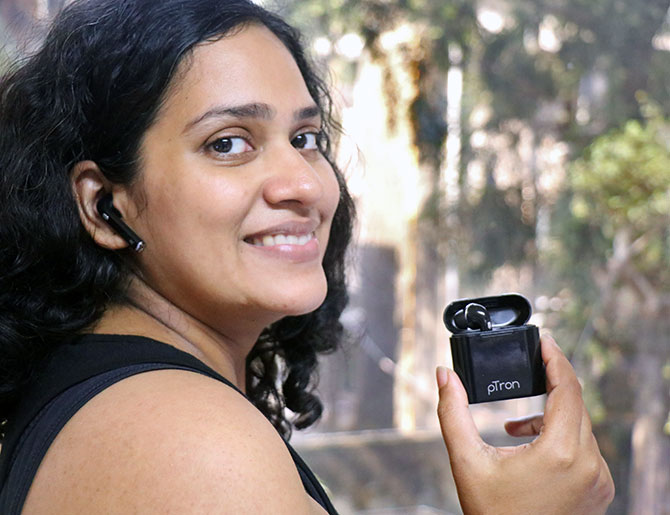 True wireless earbuds are a trend now; this means both the right and left earbuds are connected to each other wirelessly via Bluetooth. This gets rid of the wires and the wireless neck bands.

The each bud is powered independently by a built-in battery. The pair comes in a case with in-built battery, which makes it possible to charge the buds on the go. 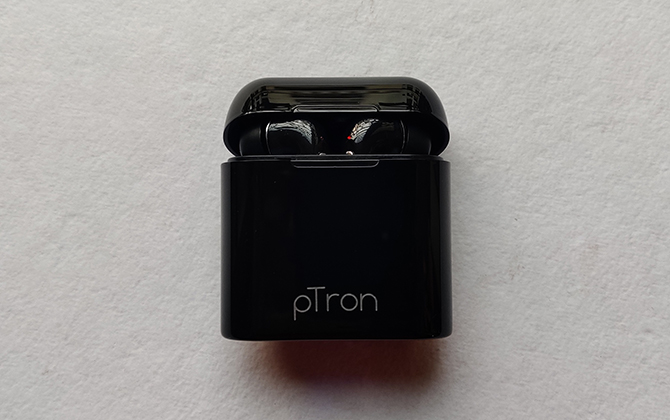 The pTron Bassbuds Lite, as the name suggests, are built for those who love listening to music with bass.

The sound output is satisfactory, with good stereo separation and a punchier bass.

To test the buds, we heard the Axel F -- Beverly Hills Cop (1984) soundtrack by Harold Faltermeyer, the live version of Hotel California and Unfinished Sympathy by Massive Attack.

The output lacked some depth (the distance of spacing between the instruments played in the music) and transparency (the clarity and crispness in the music).

The bass is not thumping, but packs a decent punch.

And, mind you, the buds are quite loud; I generally kept the volume to 50 percent or lower. 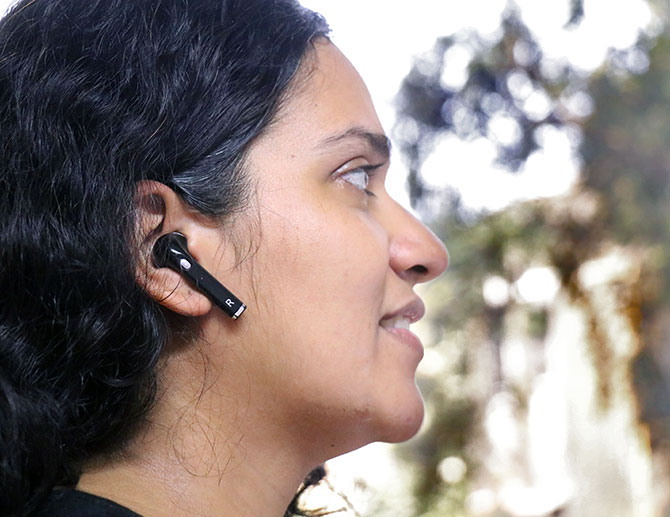 The in-ear buds come with silicon tips that fit well in the ear canal.

Even after slightly shaking my head two to three times, they stayed on.

The buds are light but are little longer in size, so that they can be noticed.

I am not a fan of in-ear buds but listening for long hours with these at a lower volume doesn’t hurt.

The pair does not have active noise cancellation (which reduces surrounding unwanted sound, i e noise eliminated electronically) but the silicon tip creates a passive isolation by reducing the ambient sound. 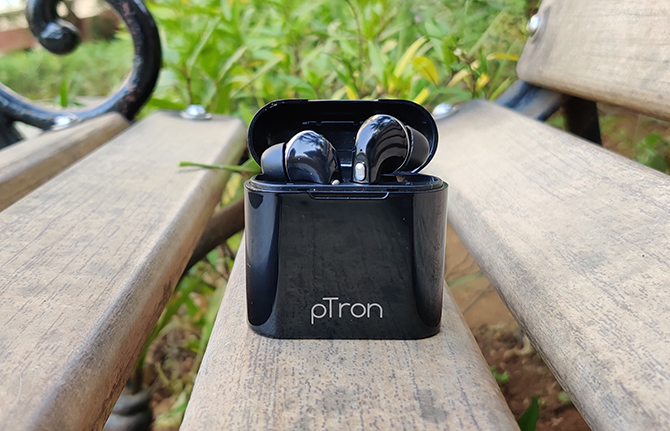 The range and connectivity of the buds to the paired device is well above 10m.

There was no delay or latency in video and audio sync while watching YouTube.

The only issue with the pair I was using was that, sometimes, one of the buds would lose sound for a second or so.

The call quality is not great but not bad either.

The sound is clear, but seems to be flattened or compressed at times due to the noise cancelling process. 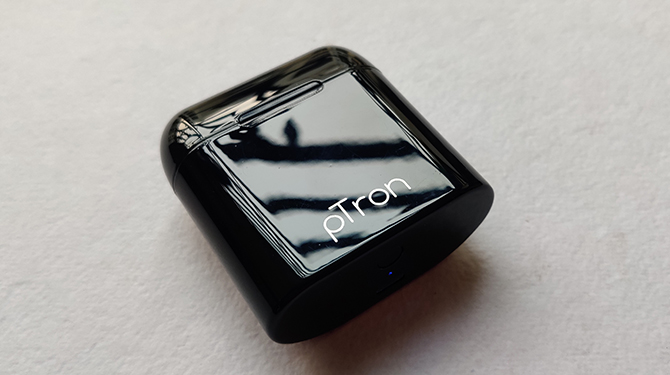 IMAGE: The casing, which acts as a power bank for the buds, is embedded with a 400mAh battery. Photograph: Ashish Narsale/Rediff.com

The bud and the case take 110 minutes to charge from zero to 100 per cent when connected to a power adapter.

The discharged buds, when charged in the case, take 60 minutes to charge from zero to 100 per cent.

Once the buds are charged, they give 5-6 hours of music runtime, depending on the volume you choose to hear it at.

You can charge the buds approximately thrice in a fully charged case. 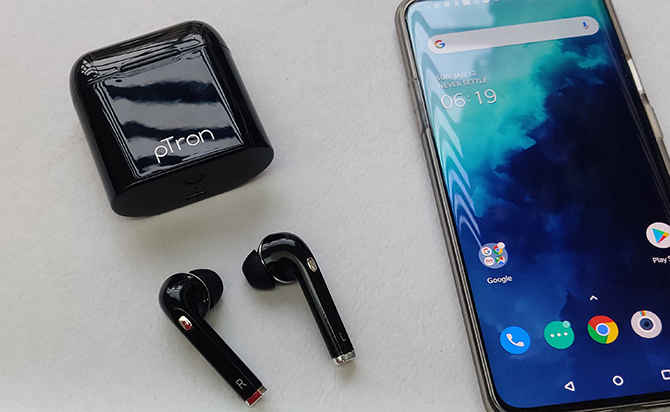 IMAGE: The process of pairing the buds is simple. Photograph: Ashish Narsale/Rediff.com

The pairing of the buds is easy.

When the buds are removed from the casing, they become active for pairing or can be activated by pressing the multifunction buttons provided on the buds for a slightly longer time.

Once paired, the buds automatically pair with your phone provided its Bluetooth is ready to pair.

What's interesting is that the buds can be paired individually to two different devices.

The buds can also be used to communicate with Google assistant on your device. 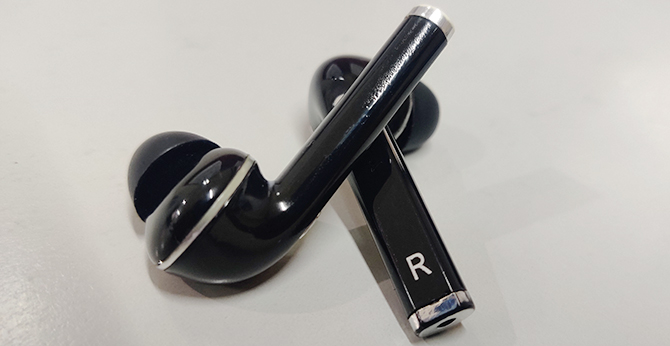 The buds are made of plastic with a glossy finish.

After using it for two weeks, the chrome paint gave away to show the plastic underneath.

The case, which comes with black piano finish, looks premium but is unfortunately a fingerprint magnet.

The pTron Bassbuds Lite Bluetooth wireless earbuds are built for those who like to hear bass in their music.

If you are on a tight budget and want to go fully wireless, then this pair offers your money’s worth; it won’t disappoint in the sound and battery department and comes with a one year warranty. 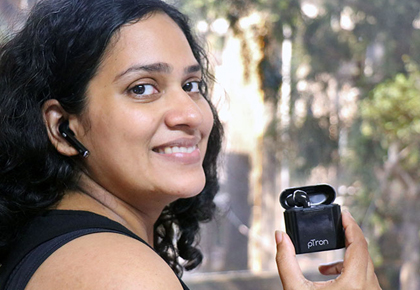