'No cash, no problem,' says Aparna Verma who has survived without cash from the time the prime minister announced the 'note ban'.
Rediff.com's Anita Aikara finds out how this young Mumbaikar has been living cashless since November 8. 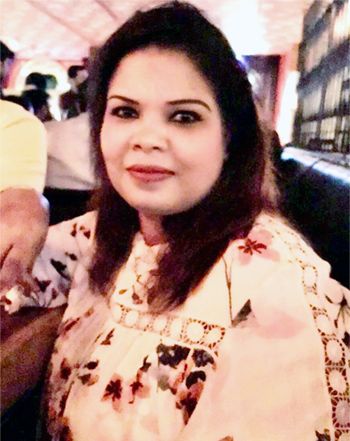 You have surely heard of people complaining about standing in serpentine queues outside banks and ATMs to withdraw money.

But here's a young woman from Mumbai who has survived without visiting a single bank or ATM post demonetisation.

Wondering how Aparna Verma, left, did it? Read on...

The note ban was announced on November 8 and thankfully for Aparna, she had just finished paying off her house help, driver, mali, etc.

The next morning her uncle called and asked, "So what are you going to do now?"

"It's simple," she explains. "If I need vegetables at home, I'd call for it from BigBasket by using Internet banking. For travelling, I use Uber, so I end up paying with Paytm."

"When shopping for grocery and other items like milk that are not available on BigBasket, I go to the local grocer. Earlier, I used to call and order in, and they would come and deliver it home. But I'd then end up paying by cash. So now, I walk up to the store to buy the groceries so that I can swipe my card there."

"The first day I went to the local grocery store, the owner had put up a notice which read, 'We are not accepting old Rs 500 and Rs 1000 notes. But we are accepting card payment'."

"So the next time I went to the grocer, I requested him to organise a Paytm, because every time I want to order something I have to come to the store."

Quiz her on how much of the initial Rs 600 she still has in her wallet and Aparna says, "I still have Rs 500 left. I haven't felt the need to go to the bank as of now."

"Before demonetisation, I spent cash only when I had to take short rickshaw rides and for paying the house help and driver," Aparna, who lives with her sister in Andheri, north-west Mumbai, adds. "Groceries were always purchased online and so were movie tickets."

"What I'm really starting to worry about is that by the end of the month, I'll have to go to a bank to withdraw cash to pay my house help. I asked my driver if he has a bank account and he said, 'Yes!' So I asked him for his bank account details and informed him that henceforth I'll do an NIFT transfer."

It's not like Aparna didn't try visiting the banks and ATMs to withdraw money. But she did it purely for the experience. "I was excited about withdrawing cash from an ATM because I wanted to experience what it felt like. I went to three ATMs and all of them were shut as they didn't have cash in them. The ATMs which did have money, had serpentine queues."

"Outside the ICICI bank in my area, I noticed a shamiana put up for people to queue up. I have heard that banks like HDFC are going all out to help people by serving chai. I feel it is the cooperative and nationalised banks where the queues are longer. I think people from the lower strata of society have panicked as they felt they'd lose their hard earned cash. So they have made a beeline to these bank to withdraw their money and keep it with them."

"I was at the international airport in Mumbai recently and the pre-paid taxi counter at T2 was shut. I was informed that the taxi drivers were not doling out change so they weren't taking bookings. People were booking Ola, Meru and Tab cabs. I had to walk out and call for an Uber. That night I wanted to have a soup so I ordered from Zomato. I just wanted to call for a soup, but they needed a minimum order of Rs 300. So I ended up calling for noodles as well."

So will she need to visit the bank in the near future?

"I'll have to go next week because I will have to withdraw my salary," she says.

Just like Aparna, her friends are managing fine because everyone is conversant with plastic money. "It is a challenge for older people. My aunt and uncle stay by themselves, their sons are abroad. They are pretty old and used to keep money at home. They are not well versed with online transactions. My uncle had around Rs 40,000 at home which he had to go and deposit in the bank. He told me, 'It took me just five minutes to deposit it. But to withdraw that money it will take 10 trips to the bank. For somebody who is 70 plus, that's a challenge."

Aparna is hopeful that the nation benefits from this move in the long run. "We are all paying taxes for the Swachh Bharat campaign and I don't see any difference in the cleanliness of the city. There's trash all around. I am a little sceptical whether things will happen. If it does, it is a good move. I think (demonetisation) is good, but I'm wary of the methodology used."

"I was in Goa for the weekend, where I met this old British couple in the hotel. The wife was telling me that demonetisation has turned out to be quite a challenge for them. They came here with only Rs 2,000. The rest of their money is in traveller's cheques. The problem is that nobody is willing to take their traveller's cheques any more. Every day at 3 pm, her husband queues up outside the bank to withdraw cash. And all they are getting is 25 pounds (around 2,000 rupees) a day which is too little. Things like this could have been addressed because this is an image building factor for our country."

Dear readers, do you think it is possible to live cashless? Have you tried it? What was the experience like?

E-mail your stories, experiences, tips to getahead@rediff.co.in (Subject Line: Living Cashless) along with your NAME, AGE, LOCATION and photograph, if possible. We'll feature the best responses on Rediff.com